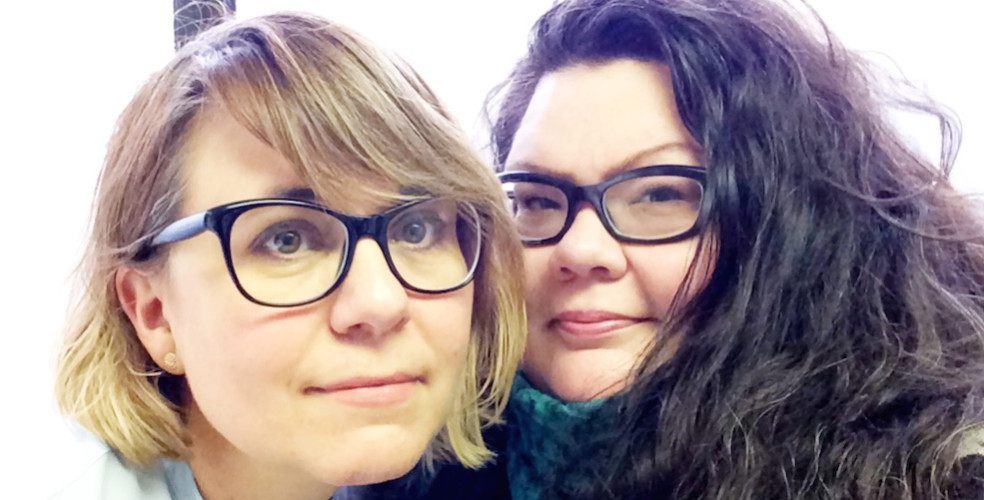 I had an Oprah ah-ha moment on the bus the other day, listening to the “Pop This!” podcast as the hosts discussed the seminal Cameron Crowe film Almost Famous.

What it comes down to, Christiansen and Warner agree, is that so often when you interview people you admire, at the core of it you just want them to like you. In fact, you kind of want them to want to hang out with you.

This is where the lightbulb went off in my head: Having sat down with Christiansen and Warner to interview them about “Pop This!” and the surprisingly amusing intersection of feminism and pop culture, I had the same feeling. I just wanted them to like me, dammit. It’s a feeling that was echoed in person by how listening to their podcast can feel.

That sentiment, mind you, is not accidental. Besides the podcast being an ideal outlet for two avid pop culture consumers to dissect movies, books, TV shows and rituals (i.e. the Oscars), at the crux of it is a desire to build community and create a space for conversation.

“You know the way you feel about Tina Fey and Amy Poehler?” says Christiansen. “Only they aren’t accessible. We are.”

A podcast is born…

The duo met a few years ago, and instantly enjoyed a sort of mutual spark of friendship. But the opportunity to talk about the pop culture they both love so much didn’t really become apparent until last year, when Warner asked Christiansen (familiar to many for her work with CBC Radio) to host her launch event for her book We Oughta Know. With such great banter and chemistry, mutual friend Andrea Gin suggested the two take to the podcast airwaves, and “Pop This!” was born (with Gin stepping in to serve as producer) a few months later.

They record at the Vancouver Public Library’s digital media Inspiration Lab, and release the roughly 30 to 40 minute episodes weekly. The “Pop This!” hosts say while Gin is vital for keeping them on track, they have been steadily tightening the show’s structure, with only an average of five minutes or so of material being edited out. They try not to talk too much ahead of recording about the subject on deck so they can stay fresh.

The “Pop This!” tagline is short and sweet: It’s two women talking about pop culture.

Christiansen and Warner say much of what they were doing at the book launch event, and in general in some of their work outside the podcast–namely use pop culture as a way to unlock the multilayered space of feminism–is what their podcast is all about. That involves a lot of give and take, quips, puns, and a sort of easygoing tennis match where no one is intent on winning; they talk much the same in person, take note, giving credence to their podcast’s lack of artifice.

“Andrea brings it up and I bring it down,” jokes Christiansen.

“We go back and forth being each other’s sidekick,” defines Christiansen, putting the punctuation of finality on it. They are a bit like Tina and Amy.

And so there is comedy in what can perhaps be seen as heavy subject matter. I mean, feminism isn’t necessarily fodder for lighthearted banter. Pop culture as a way in is a perfect point of access.

So what kind of “pop culture” is on the table?

Truthfully, all of it. “Every single thing you could name there’s a way into it through pop culture,” says Christiansen.

Warner says she has a broad definition of pop culture. “Everything of what I love is pop culture,” she elaborates, pointing to even the way she consumes politics or enjoys music. “It’s not lowbrow, it’s not highbrow. I want to get rid of those class distinctions. I love everything from soap operas to literal opera.”

There’s no such thing as a guilty pleasure, either, in these hosts’ eyes. “There are a lot of people who want to shame you for your pop culture interests,” Warner explains. “I reject that.”

Warner continues: “I think everything is fair game for criticism. It’s not about denying someone a guilty pleasure. I think we have to be able to critically examine the things that we love and look at why or why not they are problematic, and still be able to enjoy them.”

So far they’ve tackled the aforementioned Almost Famous, the rite of passage of a visit to Las Vegas, TV’s Gilmore Girls, cult classic flicks like Valley of the Dolls, rockstar autobiographies by Patti Smith and Kim Gordon, and even the Kardashians. 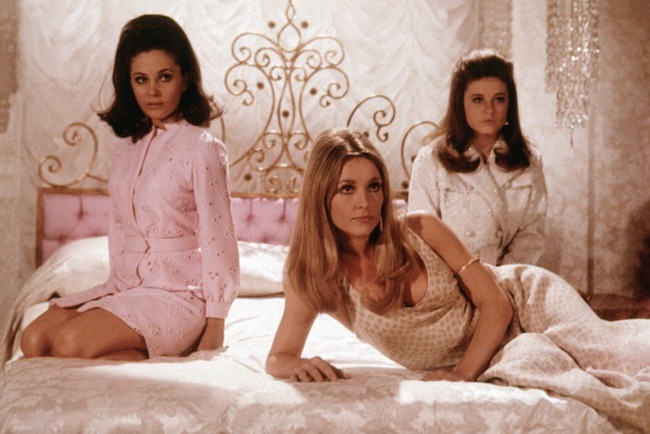 Does the camp classic “Valley of the Dolls” stand the test of time? Pop This! explores that subject

“I have a personal philosophy that I can tell a lot about you in how you respond if I say ‘Kim Kardashian.’ That’s my litmus test,” adds Christiansen. “If you get upset. I think there might be something wrong with you. If you don’t like her, that’s great–just don’t watch her show.” Christiansen waves off the onslaught of “think pieces” equating the most famous Kardashian with the rise of Donald Trump or illiteracy.

“[The “Pop This!” podcast] gives us a nice opportunity to challenge your assumptions,” points out Warner.

What wave of feminism are we in?

Then there’s the f word: Feminism. Is Christiansen a bad feminist for not hating Kardashian? Is it cool to be a judgemental feminist? Is all feminism the same?

The short answer is no. Warner and Christiansen are both glad that whatever so-called “wave” of feminism we’re in right now that there’s far more to celebrate about differences in perspective than to be worried about.

Even the hosts have differing feminist perspectives, and differing opinions; a great example is the Singles versus Reality Bites as definitive 90s cinema. (For the record, Christiansen is Team Singles, and Warner Team Reality Bites.) 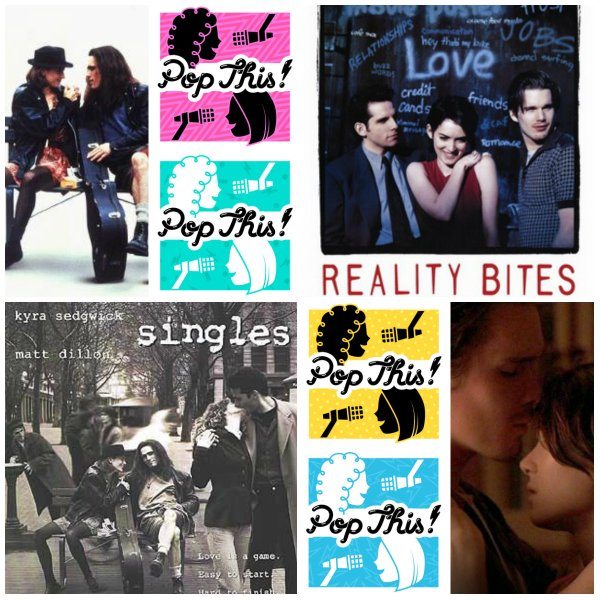 Image via Pop This! Collective/Tumblr

“We can disagree, but we’re still friends, and we still respect each other,” explains Christiansen.

Another factor that comes into play is that while Christiansen and Warner may have strong ties to being teens and young women in the nineties, there is always a contemporary wave of feminism swirling in our culture. And that’s a good thing.

“I’m pretty excited about the next generation of feminists,” admits Warner. “They really inspire and empower me.”

But to draw a line, the two women are not there to school the young ones.

“I don’t ever want to try to ‘educate’ anybody. i just want to have conversations with people,” points out Warner.

There’s a learning curve for the hosts themselves, too. Warner says she’s drawn a lot lately from her exploration of race and feminism. “I’m trying to learn to be a better intersectional feminist. I think it makes us better people,” she explains.

The time to podcast is now

Speaking of intersections, it’s not surprising that a highly successful genre of podcast are those that manage to mesh being informative and funny, and that’s a tremendous part of the appeal of Pop This!

Both Christiansen and Warner are avid podcast listeners, citing a range of interests from Warner’s love of the old Hollywood deep dives of “You Must Remember This” to Christiansen’s enjoyment of “The Nerdist,” among others.

“It’s a super exciting time for podcasts, and it’s a way to have these fun long conversations about things,” elaborates Christiansen. The bonus is that podcasts have the power to create community, in part springing from the comfort of learning that others share your niche interests. For Christiansen, a perfect example is her unabashed adoration of the Real Housewives television series. 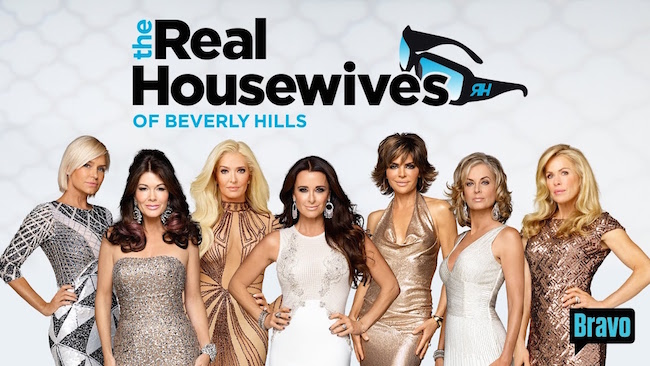 It hasn’t been too hard for them to select topics, either. Christiansen explains that in general, the subject has to “pop” for them–passing what she calls the “Oh yeah!” Test, meaning if they bring up a book, film, or show and they both say “Oh yeah!” then the odds are high it will resonate with their listeners.

They’re also enjoying going back into the prior decades to see if certain touchstones of pop culture hold up. They took on the cult classic Heathers, the original Grey Gardens docufilm, and the dark comedy 9 to 5, for example.

“These are all things we didn’t have a chance to talk about when they first came out,” Points out Christiansen.

“And they informed so much of how we grew up,” chimes in Warner.

“Maybe you wonder why you think about things a certain way, and then realize it’s because it comes from ‘that shitty movie,'” adds Christiansen. “I was wrong to be so informed by St. Elmo’s Fire. However, I love that movie.”

“It was the cocaine and saxophone, right?” jokes Warner. 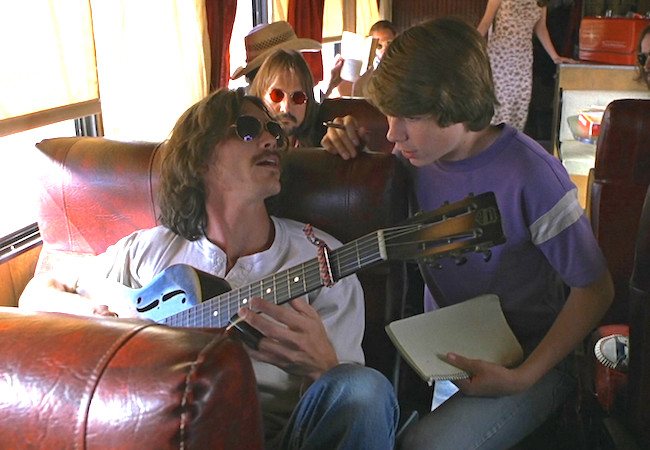 A scene from “Almost Famous”

Doing what the hosts call “homework” for the show–namely, say, watching a full season of Friday Night Lights or reading the new Carrie Brownstein memoir–also happens to be a pleasant task for them, as is getting together to do the show.

“We are happy. We’re just having the most fun,” says Christiansen.

As a result, so are the listeners. “We haven’t had any hate mail, which is nice. Everyone’s been really supportive,” notes Warner, who often is the voice on the podcast giving out their Twitter handle and email, as well as asking the audience to rate and review them on iTunes and Stitcher. “It’s an interesting fun thing to do to grow something,” adds Warner.

“If we didn’t take pleasure in it, maybe we wouldn’t do it every week,” points out Christiansen. “The nice thing about a podcast is that you just make it the way you want it. I’m not saying we wouldn’t want to be sponsored…maybe by a feminine hygiene product–”

“Diva Cup, give us a call!” interjects Warner.

They dissolve into laughter, riffing a bit on what it might be like to have a menstrual product company pulling their podcast pursestrings. I’m a little bit voyeur, a little bit in the circle. I’m sad the interview is coming to an end. This is a nice community to be in, even for just half an hour. It’s the nature of a podcast, really, which you invite into your headspace regularly.

“We all can’t hang out with each other, but this is the way that we can,” says Christiansen of the podcast. “Don’t put stars [in a review], just write that,” she jokes.

“No, put the stars,” insists Warner.

Was there anything else the ladies wanted to tell me?

“Remember that part in Almost Famous when [the teen reporter] had to meet the band?” Christiansen asks. “And the singer just said to him ‘just make us look cool.'”