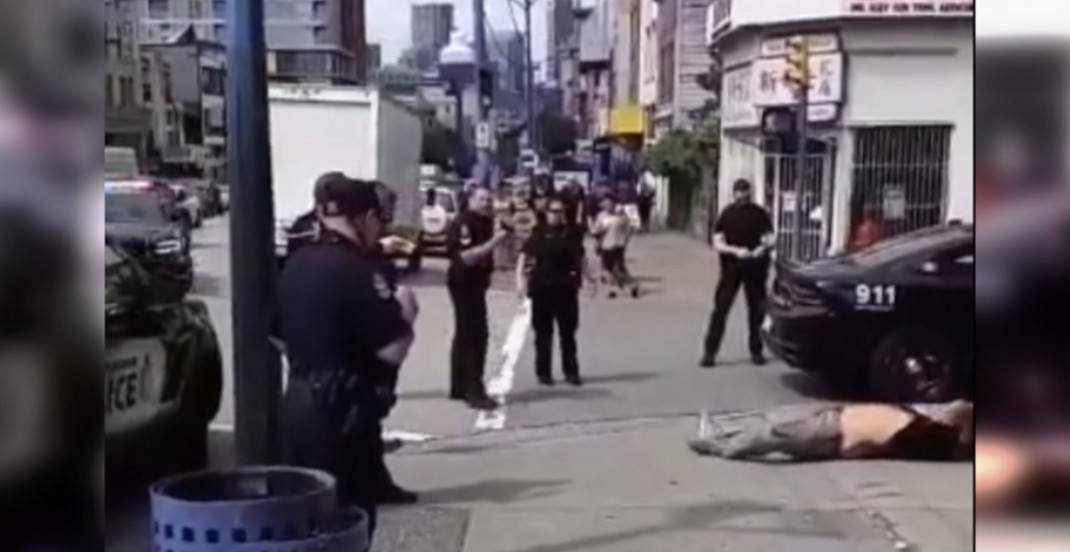 An official investigation into the conduct of VPD officers involved in the takedown of an “aggressive” man in Vancouver’s Downtown Eastside, has been ordered by BC’s police watchdog.

The Office of the Police Complaint Commissioner (OPCC) says it learned of the incident after reviewing video footage of the confrontation, which was shared online by the Alliance Against Displacement (AAD) on July 30.

CONTENT WARNING: Brutal @vpd police assault on an unarmed man in the DTES — more a dozen cops ordered him to lie down, he did; then they tasered him & shot him 3 times with a beanbag gun from 10 feet away. @GlobalBC @CBCNews @CTVNews | video from Al Fowler from @VANDUpeople pic.twitter.com/VOQBrA8Pfh

The footage shows a man being Tasered and shot three times with a beanbag gun outside the Patricia Hotel located on East Hastings Street and Dunlevy Avenue.

According to the AAD, the incident was a “brutal” attack by VPD officers on an “unarmed man in the DTES.”

VPD says officers attended the scene after receiving a call from hotel staff who were “concerned for their safety after a man entered the hotel and began to act aggressively.”

The 35-year-old Surrey man allegedly “lunged at one of the officers and attempted to punch him” resulting in an officer using a Taser, which had little effect.

Police back-up was called and gave the man “several” warnings that a beanbag gun would be used if he refused to comply. Officers proceeded to strike the man’s leg with several beanbag rounds.

The man was transported to hospital following the incident.

According to Andrea Spindler of the OPCC,  the “Vancouver Police Department has a responsibility to immediately notify the OPCC of all incidents where someone is injured by police and requires transportation to a hospital. That did not occur in this case.”

The commissioner has contacted VPD and “has now received information from the department related to the circumstances of this incident.”

Spindler says the video is just one piece of evidence and “there will be a thorough investigation before any conclusions can be reached regarding the officers’ conduct.”

“As the video was posted on social media and reported in the news, the Police Complaint Commissioner has determined that it is in the public interest, pursuant to section 95 of the Police Act, to disclose that an investigation has been ordered into this incident.”