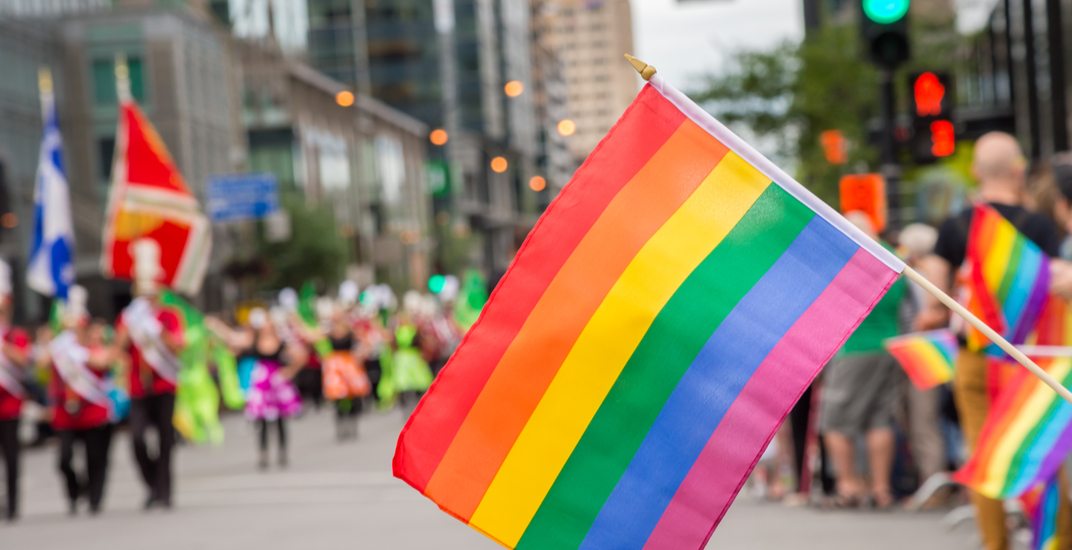 In a statement, the VPS said it engaged in “extensive consultation with the community before making this decision.”

The consultation included an anonymous online survey as well as “multiple” in-person consultations over a ten month period.

The information was collated into a report and was then received by the board who “carefully considered all angles before making a decision” based on all the information received.

In 2016, the Vancouver Police Department (VPD) was asked to remove their armoured vehicle from the Pride Parade.

Then, in 2017, the VPS decided to ban marked vehicles from VPD and other law enforcement agencies, and silenced sirens from any participating organization. The majority of police representatives marched in t-shirts, while a contingent no more than 20% of the unit marched in uniform.

The VPS also requested all departments from the City of Vancouver (including police) walk in the Parade mixed together, rather than in blocks. “The VPD has historically marched with the City Of Vancouver entry, not in a ‘police float’ which is a common misconception,” said VPS.

For Pride 2018, the decision was made to have no uniforms, weapons, marked vehicles, or sirens.

VPS noted, however, that police have not been banned outright from attending the parade.

“Part of VPS’s consultations with the public included hearing from community elders who had fought hard for police involvement in the Pride Parade,” said VPS.

“We heard about how police involvement in the Pride Parade was an intentional tactic by activists who wanted to humanize the community to law enforcement.”

This decision, they said, was made “after years of oppression” of LGBTQAI2S+ individuals by the police.

“It was thought that inviting law enforcement agencies to march with the community would be a public show of solidarity with and for us. We respect and acknowledge the hard work that was done by these community leaders,” the statement continued.

As such, police are free to continue to “participate in the City of Vancouver float, march with other groups, watch the Pride Parade, and attend our events,” said VPS.

Responding to the question of why police should protect Pride if they aren’t being allowed to march in uniform, VPS said that while some Pride parades in the country receive free policing for their events, the police do not work at the Vancouver event for free.

Policing, they said, is required by the city for permitting, and VPS must pay for policing costs of the event.

“Due to the civic status of the Pride Parade, VPS receives a discount of 75% on the first $50,000 of policing costs for the parade, and a 50% discount on the rest of the costs.”

VPS also spoke to the suggestion that if some people were upset about police carrying weapons as part of their uniform, could the police not just leave the weapons behind and wear the uniforms anyway?

This possibility was explored, said VPS, but “we were informed that police officers are required to carry a weapon when in uniform.”

As for LGBTQAI2S+ officers, the VPS said they “acknowledge that careers in law enforcement have been challenging due to historic and contemporary barriers for marginalized people.”

Police officers who are from marginalized groups, they say, “have fought for the ability to be out and proud, and may feel disappointed by this decision. We invite LGBTQAI2S+ officers to continue participating in the Pride Parade out of uniform.”

The VPS also addressed the perception that the Black Lives Matter (BLM) movement was imposing an idea on LGBTQAI2S+ communities in Vancouver.

“The three founders of the Black Lives Matter movement are black women, two of whom are queer,” responded VPS.

“From its inception, BLM has sought to create space for black women, queer, and transgender people in leadership positions,” they added.

“BLM has worked to highlight the violence against black trans women in the United States and Canada. Black Lives Matter – Vancouver organizers are queer and trans and work to advance the rights of QTBIPOC people in Vancouver.”

BLM isn’t imposing an idea, they furthered. “BLM fights for, and is part of our LGBTQAI2S+ communities.”

But isn’t this move just a copycat of what happened at Toronto Pride, when BLM activists staged a sit-in during the 2016 parade?

The short answer, is no.

Rather, the incident, said VPS, “opened a public national discussion” on police involvement in Pride parades.

“Pride organizations across the country made different decisions to keep, remove, or alter police participation in Pride Parades. VPS made a decision after consulting the local community, not because a similar decision was made in a different city.”

VPS also noted that no group or individual has “pushed” them into making a decision.

“This was an intentional decision made after listening to the community, considering all angles and carefully deliberating.”