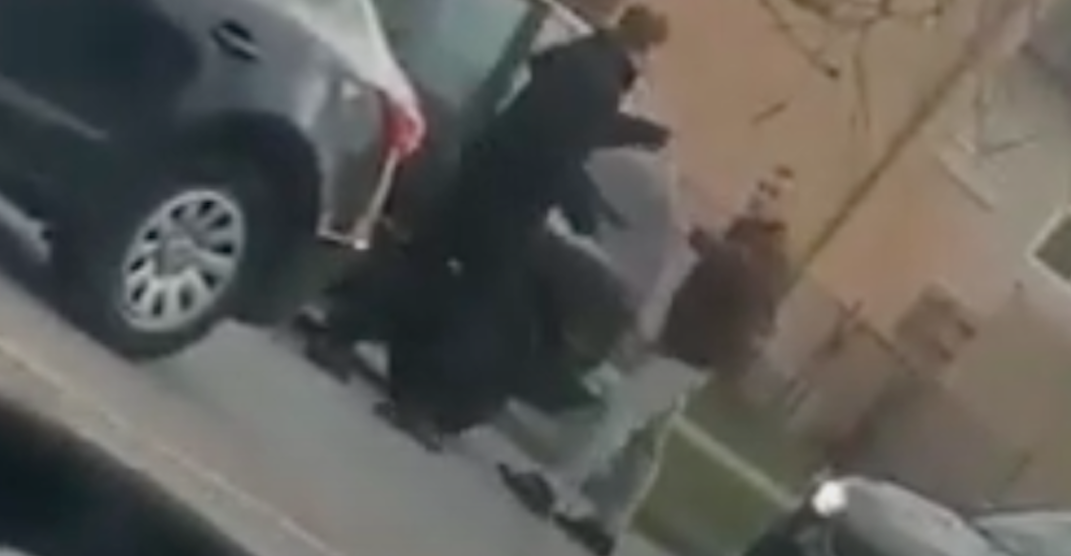 A physical confrontation moment after a Masonic Hall was set on fire in East Vancouver Tuesday morning was captured on video.

Filmed from a person across the street, the video appears to show the incident take place moments after the fire has been set.

The blaze occurred on Tuesday morning near Rupert Street and East 29th Avenue.

On Tuesday afternoon police announced they had arrested an alleged arsonist following three fires at Masonic lodges in East Vancouver and North Vancouver.

A release from Vancouver Police states that authorities in North Vancouver were first notified of a structure fire at the Lynne Valley Lodge just before 6:45 am.

Fire crews arrived on the scene and were able to contain the blaze. Shortly after around 7 am, North Vancouver RCMP received reports of a second fire at Duke of Connaught Lodge No. 64 — North Vancouver Masonic Centre. Authorities say the building was engulfed in flames.

A third fire was reported at the Masonic Temple near Rupert Street and East 29th Avenue in Vancouver before 7:30 am.

VPD said the investigation led officers to Burnaby where a 42-year-old man was arrested near North Fraser and Marine Way.

This was a joint collaboration with Vancouver Police and our partners at the North Vancouver RCMP,” says Constable Tania Visintin. “Officers were able to swiftly arrest the alleged suspect and we’re thankful that no one was physically harmed.”

Asked about the incident in the video, Visintin said that she couldn’t confirm the identity of the suspect because charges haven’t been approved.

“I can say, however, the video shows the events that happened moments after one of the fires,” she added.

VPD noted that arson charges will be recommended to Crown counsel.