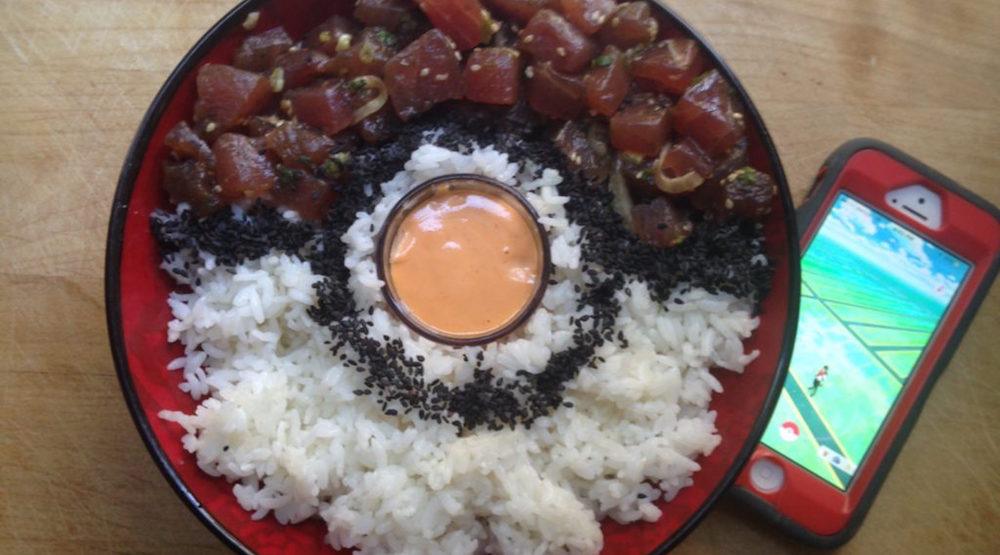 Melding two of the biggest trends right now, this recipe for a Pokémon GO-inspired poké bowl will satisfy foodies and gamers alike (if they can put their phones down long enough to eat!).

Chef, cookbook author, and Food Network personality Aarti Sequeira tells Daily Hive says coming up with her Pokéball Poké Bowl was a pretty natural connection. With Pokémon GO and poké both incredibly hot right now, Sequeira, who is enjoying the game herself, too, took right to the kitchen.

“The dish was really calling to me on multiple levels…not just poké and Pokémon… but also ‘poké ball’ and ‘poké bowl,'” Sequeira explains. “Plus, poké’s proximity, both flavour- and geography-wise, to Japan, birthplace of Pokémon, worked too. And finally, the colours! It was so kismet-ic that I couldn’t say no.”

Sequeira admits she even had to take to the internet to search out if anyone else had published a recipe for a Pokémon GO-inspired poké bowl. When hers appeared on her blog, Aarti Parti, on Wednesday, no one else had.

In her blog post, Sequeira explains that she, her husband Brendan McNamara, and their two young daughters, are happy to head out into the neighbourhood to play the smartphone-based game. In particular, their eldest daughter is getting to spend more time at parks and on the playground in their home city of Los Angeles as a result.

Food is still a great joy in life for the author of the cookbook Aarti Parti and Food Network Star season 6 winner. She says she is a big fan of poké, the Hawaiian marinated fish dish that is a booming coast-to-coast trend right now. Canadians have caught onto to the poké wave big time; several spots in cities like Vancouver, Montreal, and Toronto have opened or will open soon.

“There’s something about that warm, sticky rice contrasting with the cool, briny chew of the fresh fish that makes my heart so happy,” Sequeira blogs.

So which trend will last longer? “If we keep fishing bluefin the way we are, I think the Pokémon GO craze is destined to last longer,” posits Sequeira. “In all seriousness, I do think Pokémon will last longer–it just got BANNED in Saudi Arabia. Whenever you ban something, you know it’s powerful!”

For her Pokéball Poké Bowl, Sequeira says it’s one part self-expression, and one part sourcing high-quality fresh ingredients. She suggests talking to your fish monger about guiding you towards the healthiest and sustainable fish options. As an alternative, though, for a vegetarian version, you can sub out the fish for roasted beet cubes, for example.

These days, if you’re in L.A. you might spot Sequeira and her family headed to a Pokéstop to do some catching. Otherwise, you can find her on the Food Network as a judge on Guy’s Grocery Games, and the current season of Food Network Star, or on her podcast, Pass the Salt.