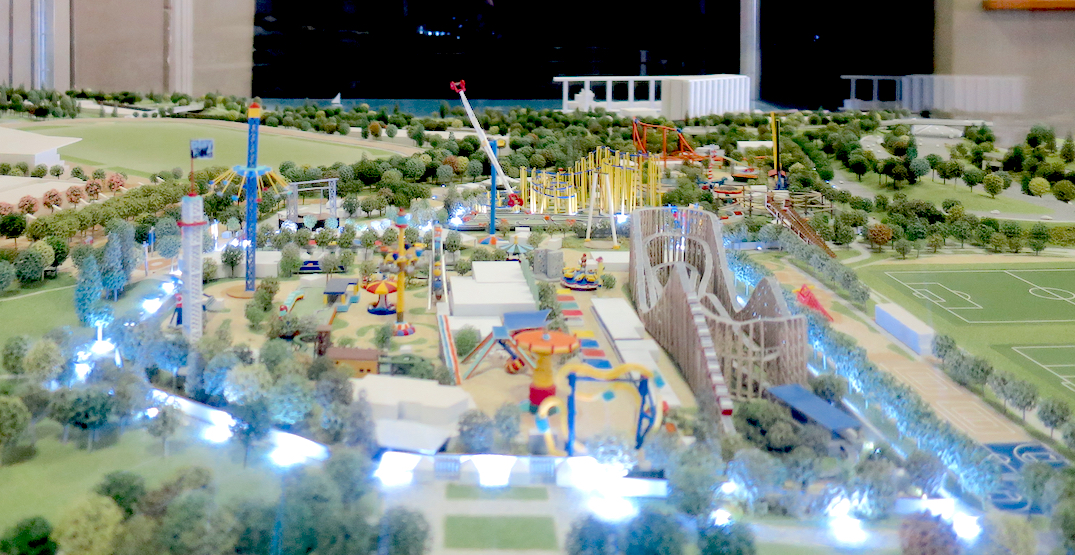 Four years after the proposed plan for a new and expanded Playland was first unveiled to the public and presented to Vancouver city council, staff with the Pacific National Exhibition (PNE) are set to return to city hall sometime this spring to present their business case for the project.

The plan calls for the complete revitalization of Playland, transforming it from an amusement park to a theme park, and a northward expansion of the attraction’s footprint into a parking lot and the barns of Hastings Racecourse.

This expansion will grow Playland from its existing size of 15 acres to 22 acres, complete with various themed lands with new and renewed rides, attractions, and amenities, as well as a reconfiguration of the existing southernmost footprint away from Hastings Street.

During a recent community meeting, PNE master plan project manager John Brodie said the new and reimagined attraction of a theme park is intended to provide affordable entertainment options for families and youth, without having to travel elsewhere for the theme park experience.

“It provides a world-class regional entertainment option that people can come to,” he said. “This is not just something that you need to spend a couple thousand dollars on to get on a plane and book hotels, but it actually provides that type of experience where you can get your kids, travel just a few miles, and you’re there. So it is really about the affordable access that we want to ensure.” 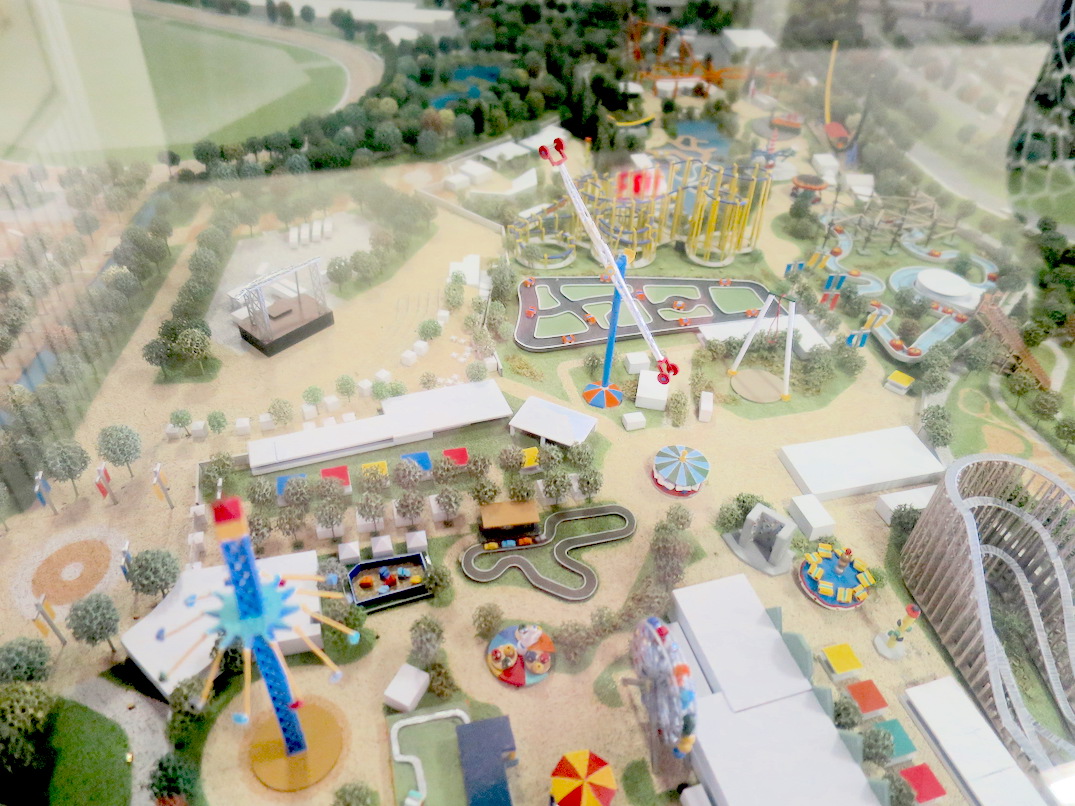 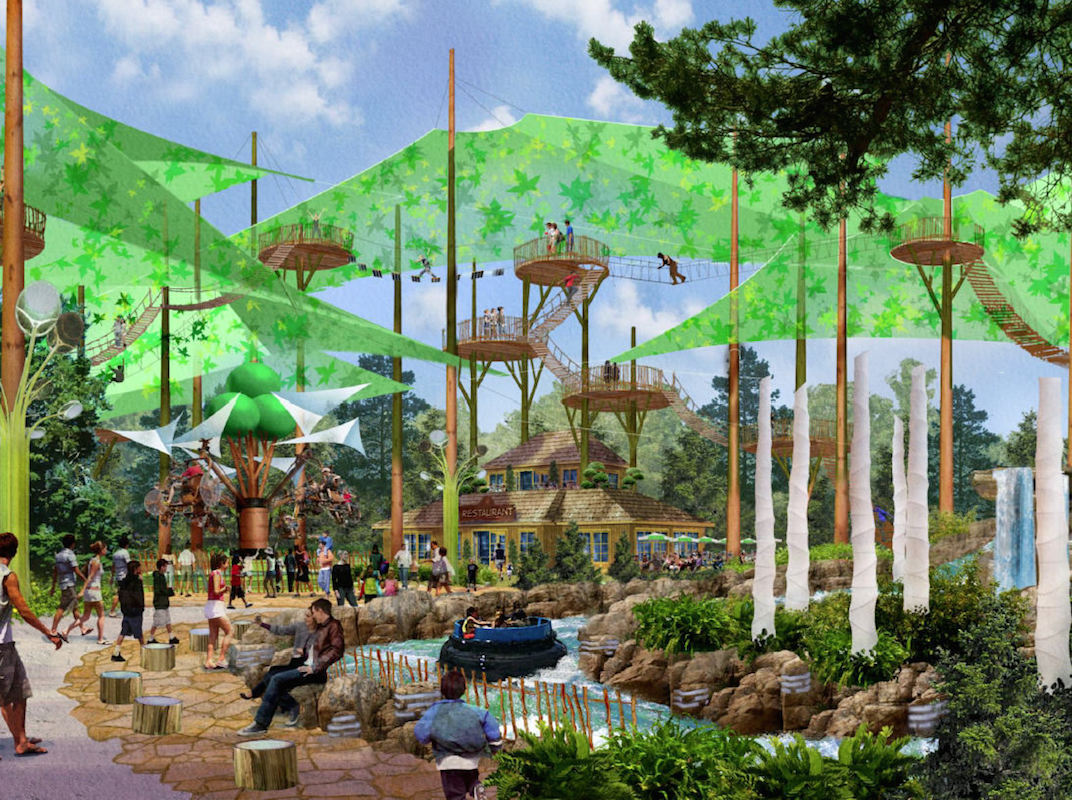 At present, Playland is an amusement park, which is a concept typically defined as a loose collection of roller coasters, rides, and midways.

Brodie says PNE intends on keeping the original 2016 plan of between five and seven themed lands, along with creating ample greenery and water-permeable grounds, instead of Playland’s current condition of an asphalt surface.

“We want it to be a better place to visit, with better attractions and programming. That is what this is really all about, making it a better entertainment option. But it’s also a nicer place to be, it’s not just asphalt as it’s also covered with trees and plants,” said Brodie.

“It is more like a theme park that you might visit in Southern California, if you’ve been to a Disneyland or Knott’s Berry Farm. But it keeps the accessibility and affordability that has been a part of Playland today.” 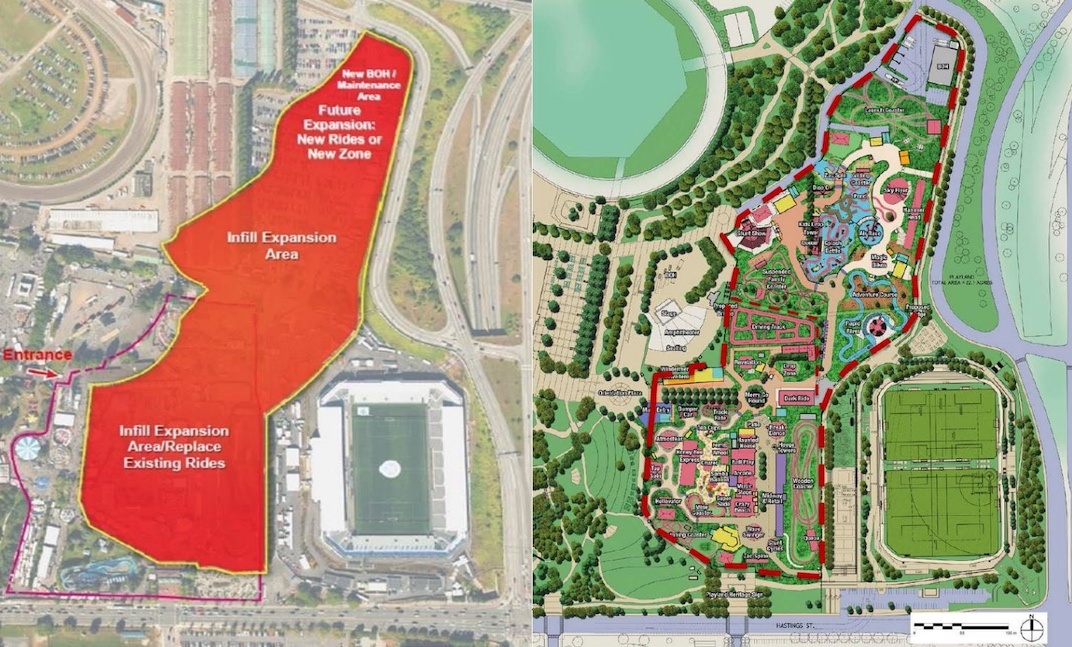 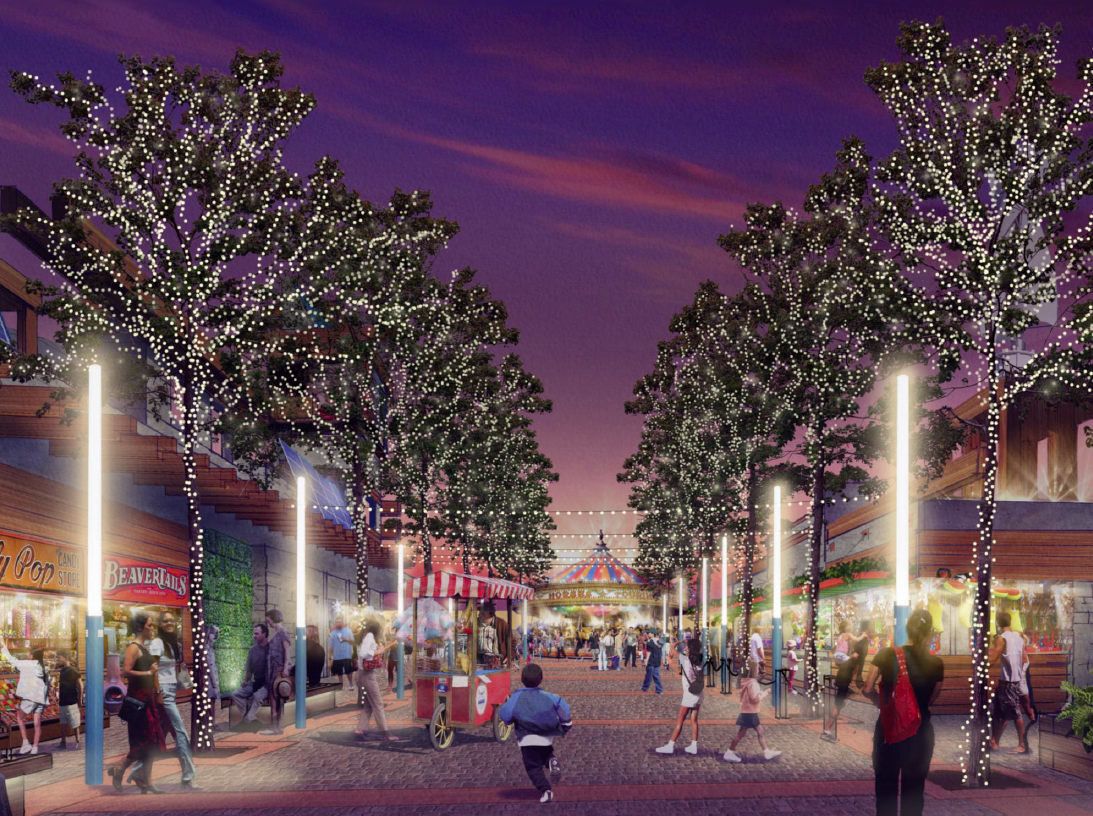 To minimize the disruptions to Playland’s operations, without having to shut it down, the redevelopment will be phased during the off-seasons, when the attraction is not operational.

The first phase of construction would focus on Playland’s existing footprint, specifically investing in underground infrastructure such as sewer and electrical systems, and revitalizing the rides and programming, including greening and clustered theming.

The second and third phases provide the attraction with its major theme park expansion into the parking lot and barns, and moving some of the existing footprint and rides northwards. New centralized back-of-house facilities for PNE staff and maintenance crews are planned as part of this expansion, instead of the current ad hoc, scattered, back-of-house approach.

Playland’s main entrance would also be relocated into the core of the park next to a new plaza accessed by key pathway corridors — as opposed to the current location on Hastings Street — and open up into a new Main Street area within the theme park.

There will be some overlap in the implementation timeline of the phases, which should all reach full completion by the end of this decade. 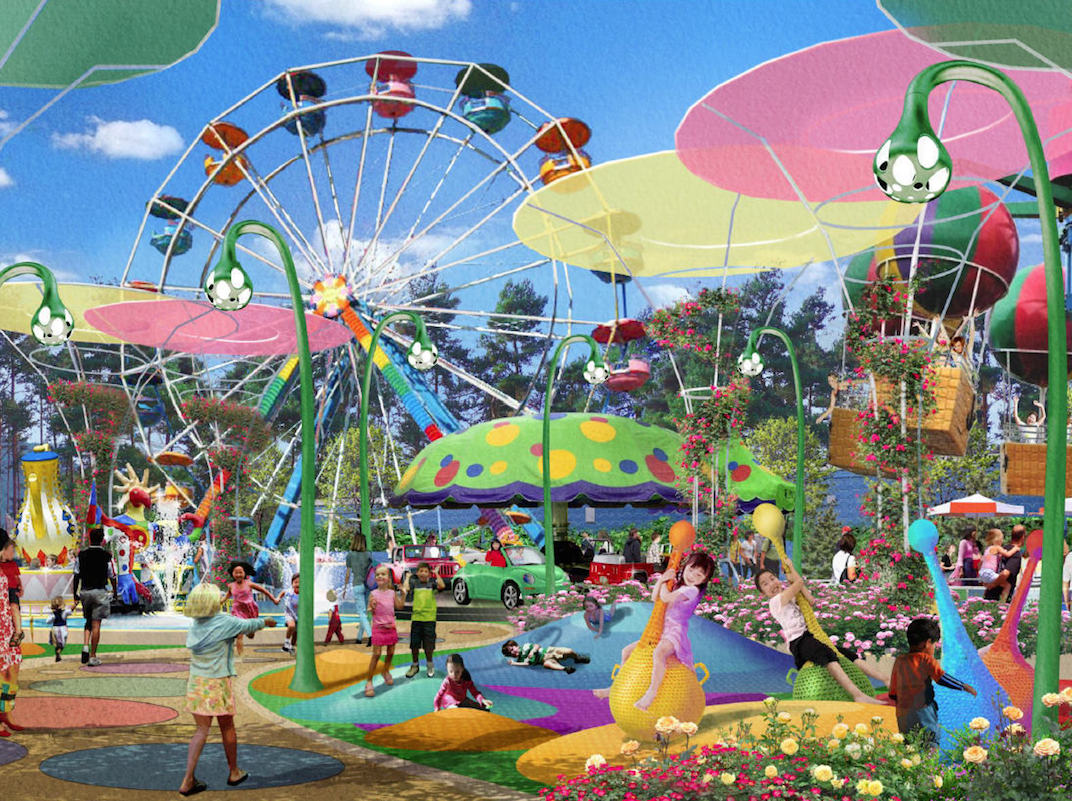 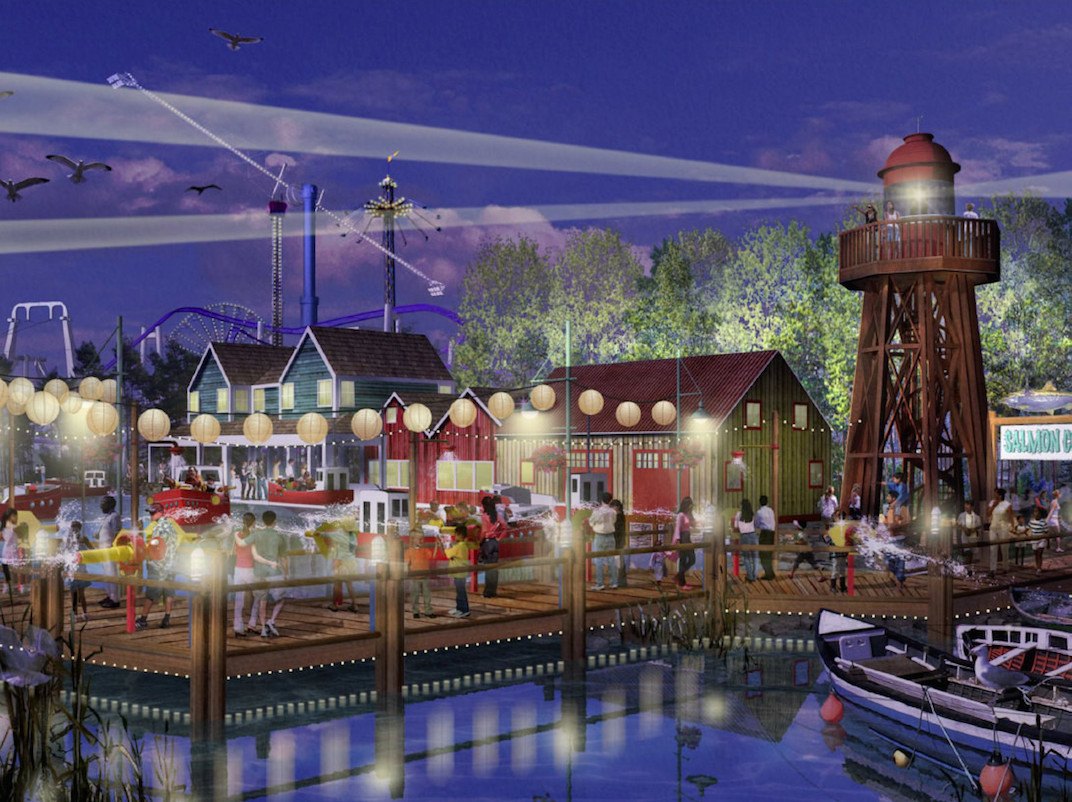 Brodie notes PNE has performed extensive analysis and studies over multiple aspects of concern that have deemed this self-funded project feasible.

City council’s 2010 approval of the Hastings Park Master Plan first envisioned the Playland redevelopment and expansion. Further study was conducted in 2013, and updated analysis since then has shown the business case potential has improved, with the growth of the local market and the theme park industry.

“All signs point that it is going to be a better opportunity than it was earlier. It also showed that attendance and revenue would grow as a result, which is of course what you’d like to see from a new and improved Playland,” he said.

Along with work to determine the financial feasibility, PNE also performed geotechnical, environmental, archaeological, and traffic and parking studies. 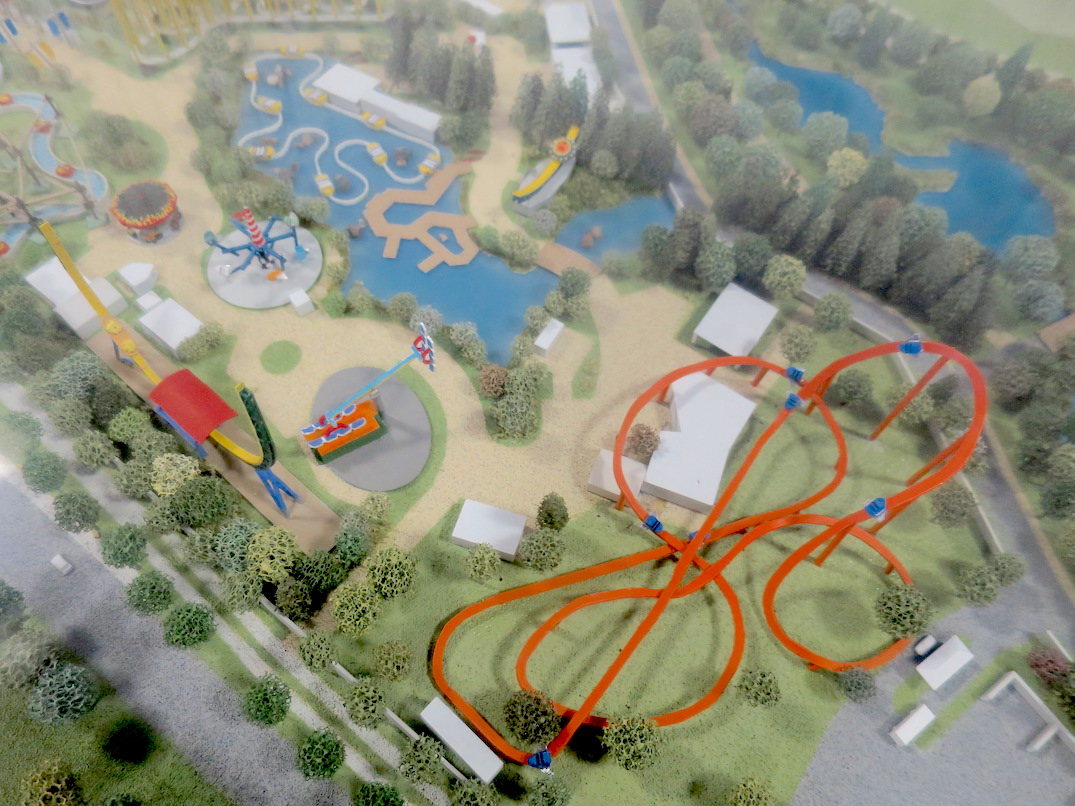 Additionally, this spring, city council is also slated to receive and consider the business case of the new PNE amphitheatre — a rebuild of the fairgrounds’ existing amphitheatre into a world-class outdoor concert and entertainment venue.

Originally built in 1966 as a temporary facility, the venue is now dilapidated. It currently has a capacity for 7,000 spectators, with a combination of both grandstand seating and standing areas.

As the venue lacks basic permanent back-of-house and spectator amenity facilities, temporary facilities often need to be brought in, which is often cost prohibitive for smaller arts, cultural, and not-for-profit groups. 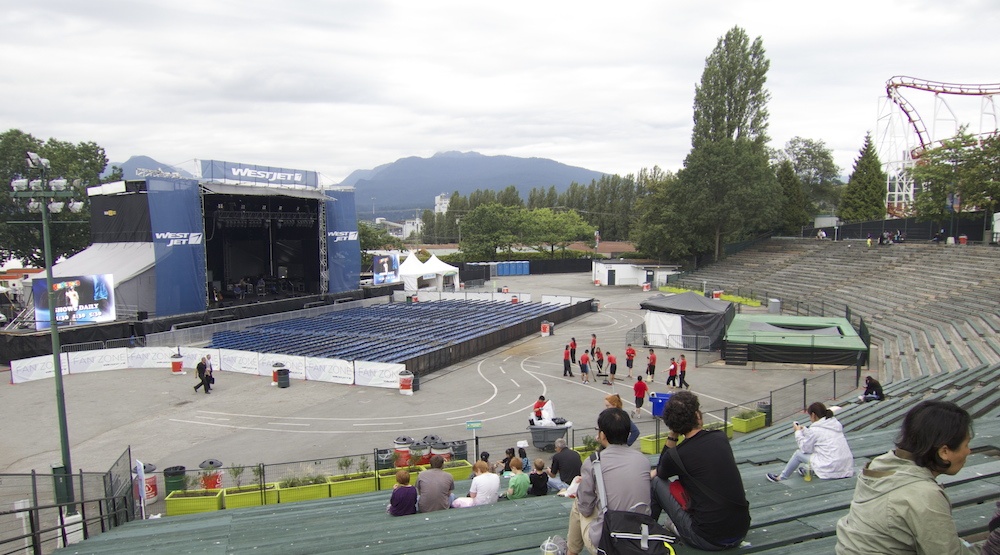 The project to rebuild the amphitheatre provides the venue with new permanent structures, such as washrooms, concessions, office and meeting space, and dressing rooms. A new portable stage, providing varying stage height, size, location, and design, offers flexibility for a wide range of event sizes and types.

“Right now we have temporary facilities that need to be brought in that comes at some cost, which limits the accessibility to some community and cultural groups. With permanent infrastructure, those costs will go away and it will lower some of the barriers of entry for those groups,” he said.

“This will be a world-class venue. If you go to Rogers Arena, you look for the basics like Wi-Fi, concessions you want to eat in, washrooms… These are all part of the process of making this a place where people want to be. Imagine being at an event here with the mountains in the background.”

The new amphitheatre will have greater capacity — up to 9,820 spectators, including 4,500 in bleacher seating, 4,250 in floor seating, and 1,070 in VIP spaces such as private lounges, suites, and flex space. With the movable stage and scaleable seating, smaller events can better purpose the amphitheatre for their needs.

All of these new permanent facilities and seating areas will be protected from the elements by a large canopy roof, which potentially allows the venue to attract events throughout the year.

Both the canopy and the use of padded seating will not only improve the spectator experience, but also greatly improve sound management, mitigating noise from spilling out into the neighbourhood.

PNE’s analysis, after consulting with the local event production industry, indicates the region is experiencing a shortage of such venues. There is currently not enough suitable event space to meet the growing demand for events. 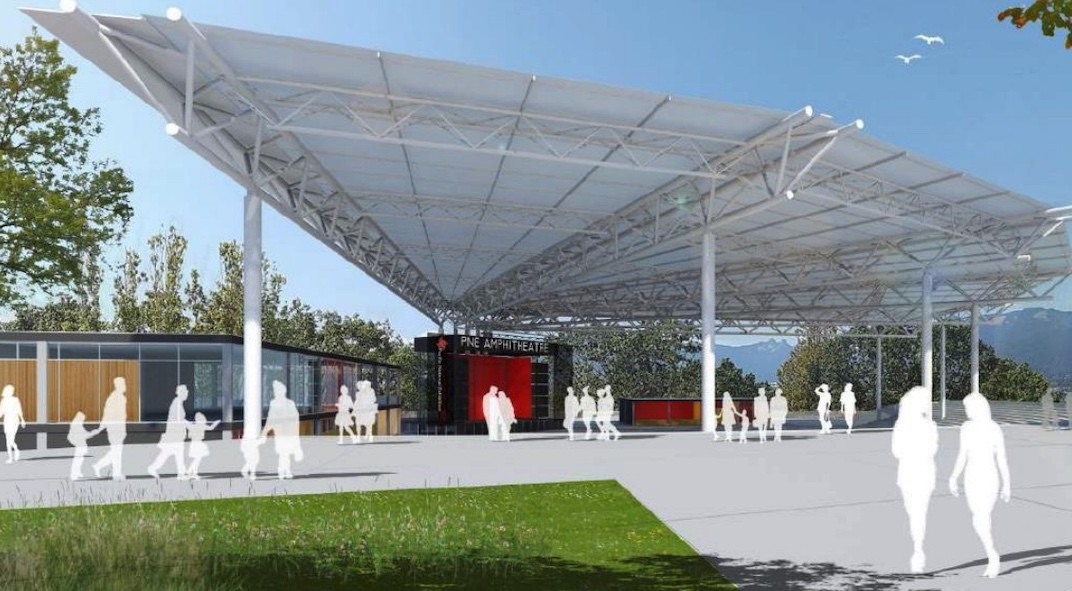 Both the Playland redevelopment and the new amphitheatre will help PNE further achieve its social mandate of boosting the local economy, generating tourism, and creating employment opportunities, especially for youth.

For PNE, the two projects are vital for generating revenue to not only fully cover the construction costs, but also to fund the implementation costs of other self-funded capital project components of the long-term master plan for Hastings Park, and the annual park-wide operational and maintenance costs.

“The outcomes we are looking for are improved attendance and revenue,” said Brodie. “[Playland] is considered one of the economic engines. But that needs to be paid for somehow, and Playland is one of those critical components that generate revenue on site.”

“We want to make sure the buildings and infrastructure are upgraded. Hastings Park is a dated site, a lot of the buildings here are actually heritage buildings. That means we can’t just tear down and redevelop, we need to invest into the current buildings. We need to make sure we keep the facilities safe and in optimal condition.”

There is no precise, updated cost estimate, but the Playland redevelopment alone is in the ballpark of $100 million.

These projects will only proceed after the approval of the business cases by PNE’s board of directors and city council. After the approvals, detailed design will commence.

Brodie notes that construction on the new amphitheatre could start soon. Last fall, the municipal government launched the bidding process of seeking a partner to potentially help design, build, operate, and partially finance the entertainment venue. 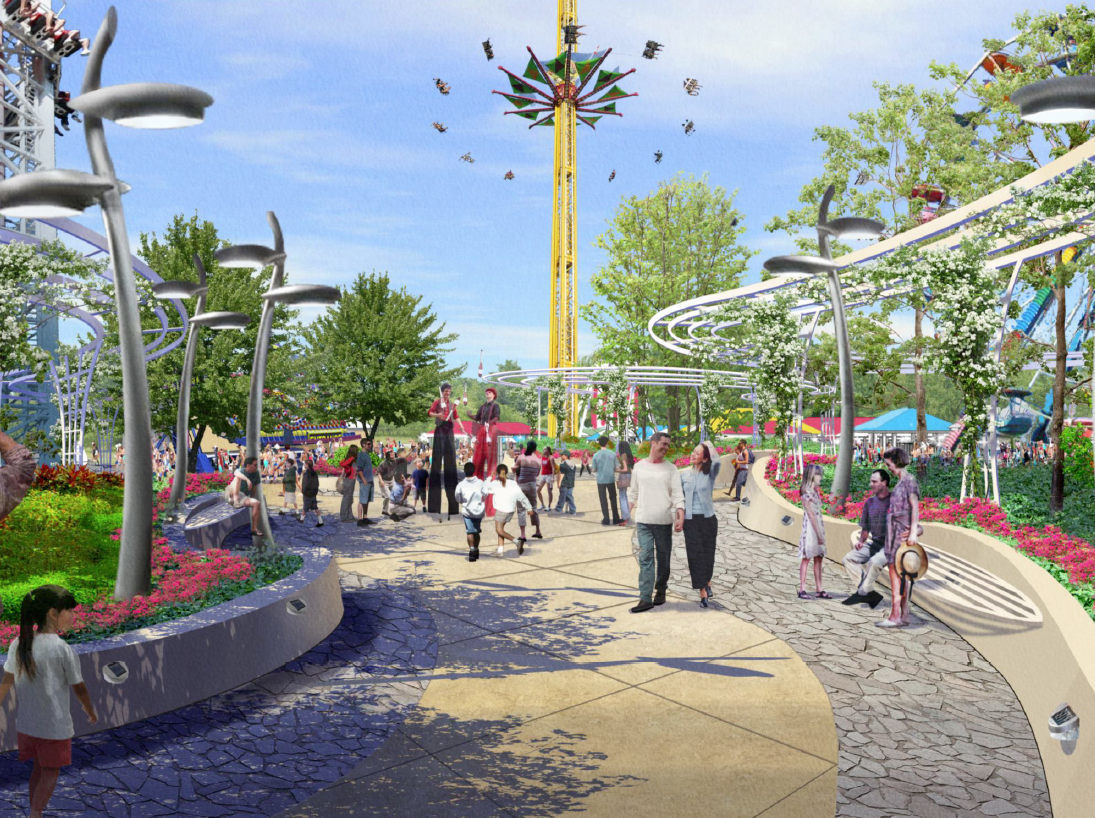 As for other improvement projects, PNE has secured funding to daylight Hastings Creek — running north to south between The Sanctuary and Burrard Inlet, just northwest of the amphitheatre and Playland footprints.

Lost parking for the Playland expansion and greening efforts in other areas could be relocated and amalgamated into different locations on the site, including the possibility of new underground parkades. Improved public transit connections and dedicated ridehailing pick-up and drop-off areas are also being contemplated.

Staff are examining opportunities to reuse and renovate The Livestock building, after the current projects are complete. It has over 100,000 sq. ft. of floor area, but it is under-utilized at this time. It could be redesigned for wider benefits, such as indoor and outdoor festival areas, artist workspaces, educational programming, and multi-purpose spaces for both community and commercial uses.

Over the longer term, PNE has plans to construct a 150,000-sq-ft convention and exhibition hall located underground in an area wedged by Pacific Coliseum, Rollerland, and Agrodome. 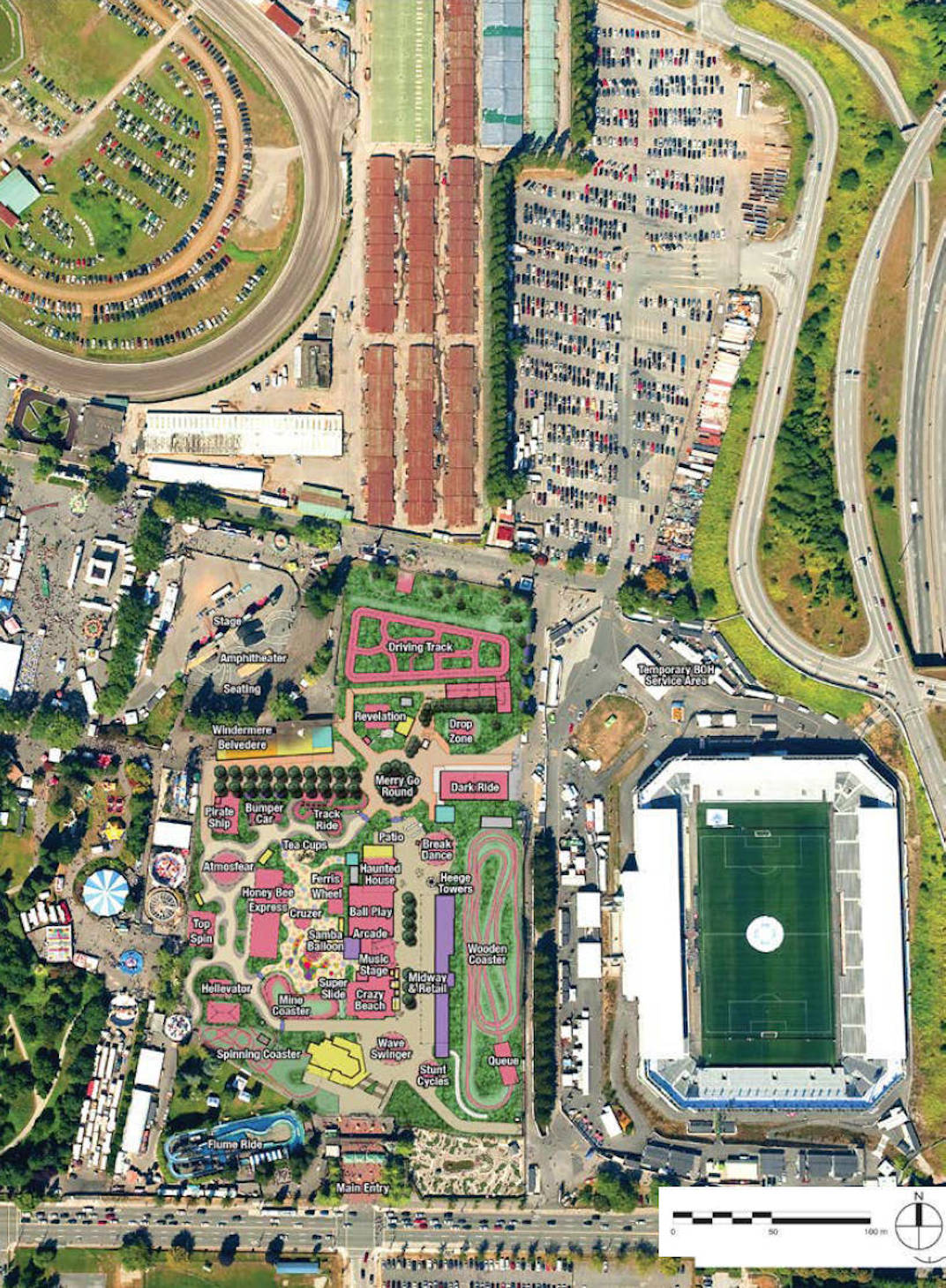 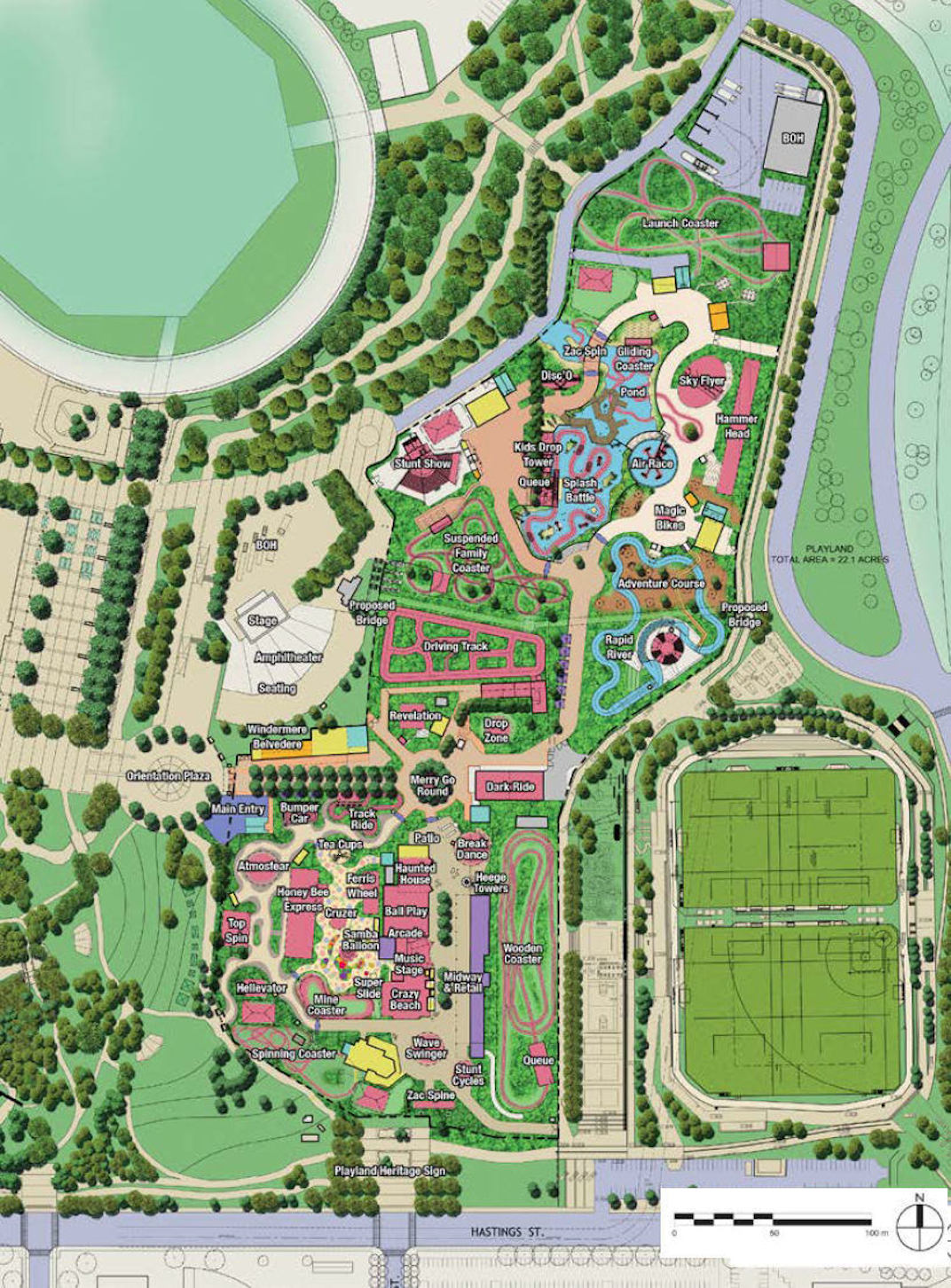