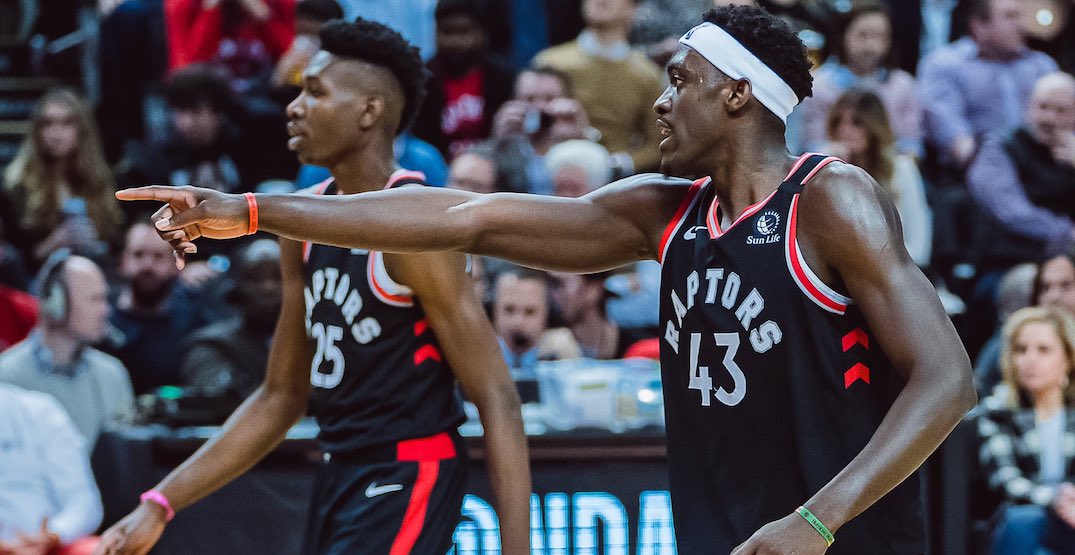 Same story line every year, doesn’t it seem? The Toronto Raptors put up a strong season among the top of the Eastern Conference, and then they’re expected to fall off, before finding themselves amongst the league’s best once again.

After six division titles in seven years, you’d think the average media projections would be a little kinder to Toronto.

It’s hard to predict exactly what the season will look like, with the Raptors slated to start their upcoming campaign in Tampa, Florida.

Although it’s tough to imagine they’ll be able to replicate their franchise-best regular season winning percentage from this past year (which included a 15-game win streak), when you really dig into it, there’s not much reason the Raptors shouldn’t be a force once again.

On a call with reporters this morning after his new four-year, $85 million contract was officially announced, guard Fred VanVleet is embracing the challenge of being overlooked.

FVV on Raptors: "We;re back where we were pre-Kawhi where people are overlooking us again, which isn't a bad place to be…I can't wait to get back to work."

VanVleet’s “bet on yourself” mantra that he’s carried and repeated since being an undrafted free agent in 2016 has a larger application to the Raptors, too.

Sure, four major pieces from the 2019 championship roster have now left, all via free agency: Kawhi Leonard, Serge Ibaka, Danny Green, and Marc Gasol. Interestingly, they’ve all chosen opportunities in Los Angeles, although Green has since been shipped out to the Oklahoma City Thunder.

But still, a new core of Raptors has emerged.

Pascal Siakam and VanVleet have locked in for the next four years. Kyle Lowry, who you have to imagine will be given every opportunity to retire a Raptor, is returning, and after missing the 2019 playoffs due to an appendectomy, OG Anunoby showed in the most recent postseason he can be counted on in the game’s biggest moments with a Game 3 buzzer beater against Boston that kept Toronto’s hopes alive a little longer.

And of course, they’ve got the NBA’s reigning Coach of the Year at the helm in Nick Nurse, backed by one of the league’s strongest front offices with Masai Ujiri and Bobby Webster. If anyone’s proven they’re able to patchwork together a contender, it’s this trio.

Looking around the Eastern Conference, there’s few easy playoff matchups. Milwaukee, despite their flaws, are still are led by two-time MVP Giannis Antetokounmpo.

Miami’s surprise Finals run showed exactly why they’re not to be taken lightly, and Toronto’s fellow Atlantic Division foe Boston knocked them out just a few short months ago.

And then there’s the new-look Nets, as Brooklyn will get their first taste of Kyrie Irving and Kevin Durant playing together following an injury-filled year. Even Indiana, who was swept in four games by the Heat in the first round, still finished fourth for a reason in the East last year, and new team president Daryl Morey will be active in retooling the Philadelphia 76ers.

Though the Raptors can’t control what the rest of the Conference does around them, the ball is in their court if they’re looking to manufacture another long playoff run.

Who needs to step up?

More than anything, the Raptors will be able to go as far as the 2020 first-time All-Star can take them.

After a rough postseason series against Boston where he looked lost and unable to solve a tough Celtics defence, Siakam has the opportunity to prove that he’s been able to refine his game and emerge as a true #1 option on offence.

Montreal’s Chris Boucher might seem like a rather fresh NBA talent, but he’s actually a year older than both VanVleet and Siakam.

With the departure of both Ibaka and Gasol, Boucher moves from a third-string luxury to a key piece of the rotation. He’s shown flashes of brilliance when given the opportunity, including a 15-point, four-block performance off the bench last year against the L.A. Lakers at Staples Center.

also shoutout chris boucher for blocking lebron and AD on back to back possessions. how many players have ever done that? pic.twitter.com/stFKJkcuj8

Even with Toronto’s biggest departures coming from the front-court, minutes have still likely opened up for sweet-shooting guard Matt. Though he didn’t play enough to qualify for league leaderboards, no player who had as many as Thomas’ 99 three point attempts shot as well as he did (47.5%) from long range.

Expect Thomas to be given opportunities to prove his worth as a depth scorer.

The Raptors’ biggest offseason signing was internal, with VanVleet’s deal welcomed, if not somewhat expected.

Outside of that, they signed Australian centre Aron Baynes — not a poor player by any means, but mostly just a veteran guy picked up after they were unable to retain either of their expiring big men in Gasol and Ibaka. There’s flexibility for the future and a hot free agent crop of 2021, but Webster can’t risk not trying to add a piece in the short term if it could help one of the league’s best teams keep their window open now.

My pick? Move out Norman Powell and draft picks if necessary to strengthen the front-court.