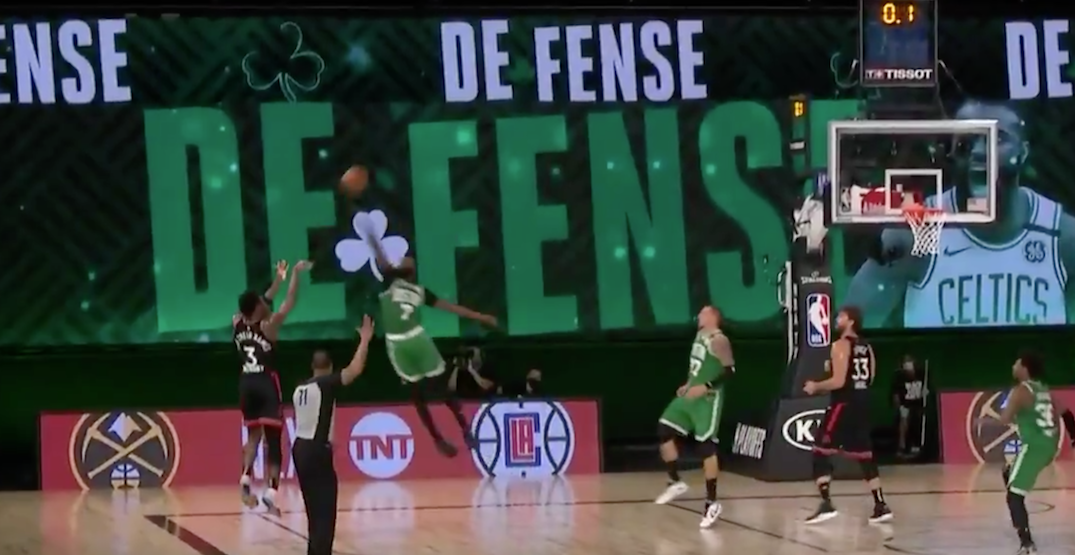 After Daniel Theis gave the Boston Celtics a 103-101 lead with just 0.5 seconds left in Game 3, the Toronto Raptors were on the verge of becoming a critically endangered species in Orlando.

At that point, the Raptors needed a miracle to avoid the dreaded 3-0 series deficit.

OG Anunoby gave them one.

Anunoby’s unbelievable buzzer-beater gave the Raptors a 104-103 win and breathed new life into a title defence that was about to be put on life support.

With the Raptors struggling to shoot in the first two games of the series, Kyle Lowry came out in Game 3 and decided he was just going to attack the net.

Lowry scored 10 of Toronto’s first 14 points. The rest of the Raptors were struggling offensively, though, and they ended up trailing 33-28 after the first quarter after another Kemba Walker buzzer-beater.

In the dying seconds of the first half, Walker struck again.

Kemba Walker (21 PTS) lets it fly before time expires in the 1st half on TNT! #NBAPlayoffs @Raptors 47@celtics 57

The Raptors went into halftime down 57-47, with their offensive struggles in this series continuing. They shot just 38.3% from the floor, 5-of-22 from deep, and also barely made over half their free throw attempts, hitting just 6-of-11. With 15 points, Lowry was the only Raptor in double digits. Only four Raptors even had more than three points.

The Raptors came out to start the second half playing like their season on the line — which, for all intents and purposes, it was. They started the third quarter on a 21-9 run to retake the lead. Lowry was still trying to singlehandedly drag his team back into this series.

It was a better third quarter for the Raptors, but they were still down 80-76 after three quarters.

After a back-and-forth fourth quarter, the game was tied late, when the Raptors blew their coverage and lost Theis in the paint, where Walker found him for an easy dunk.

KEMBA TO THEIS WITH 0.5 REMAINING! 🤯 pic.twitter.com/yP6STSRSze

That looked like it was going to all but end any realistic chance of Toronto defending its title.

Anunoby had other ideas, though.

In addition to his game-winning shot, Anunoby also had a double-double on the night, finishing with 12 points and 10 rebounds. Lowry’s heroics also shouldn’t be overlooked, though. He played nearly the entire game for Toronto and put up a game-high 31 points in 46:29 of action.

Coming back from a 2-0 series deficit is doable. The Raptors did it last year in the Eastern Conference Final against the Milwaukee Bucks.

Coming back from a 3-1 series deficit is also doable. The Denver Nuggets just did it against the Utah Jazz.

How big is it that the Raptors avoided a 3-0 series deficit, though? If coming back from it is doable, it hasn’t been done in the NBA yet. Only three teams that fell down 3-0 have ever even forced a Game 7, and none have since the Portland Trail Blazers did so against the Dallas Mavericks in the first round of the 2003 playoffs.

As for the Raptors’ history with 3-0 deficits, it isn’t pretty. They fell down 3-0 in the first round against the Washington Wizards in 2015, as well as in the second round against the Cleveland Cavaliers in both 2017 and 2018. All three times they ended up getting swept.

Needless to say, it was a season-saving miracle — for now at least — that Anunoby provided them with tonight.