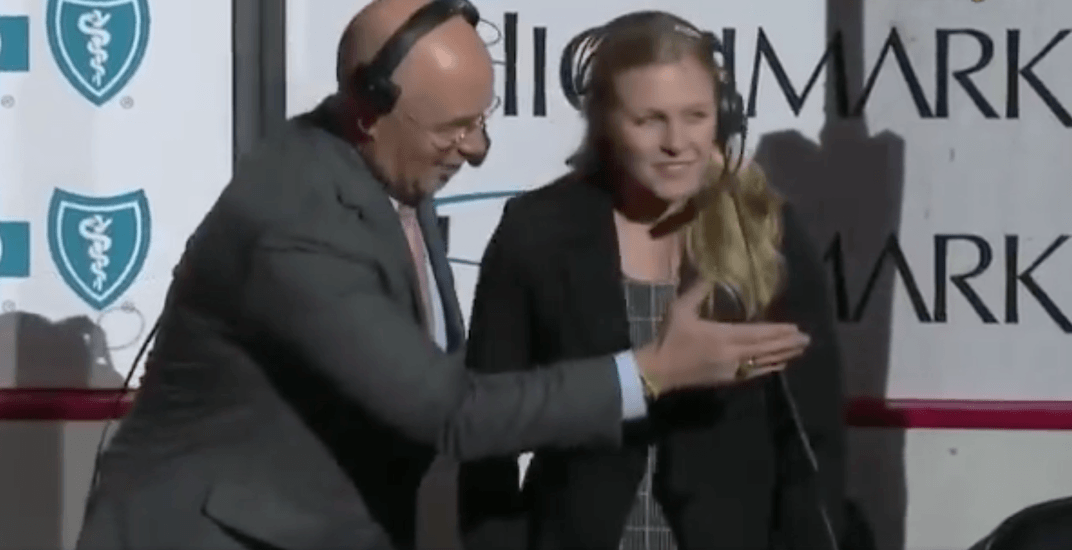 Pierre McGuire is one of a kind.

The former NHL coach and longtime hockey broadcaster with TSN, who now works in the United States for NBC, has a unique style.

His style has drawn criticism from fans before, but safe to say he’s never received the level of backlash he’s getting after Wednesday’s broadcast.

Joining McGuire between the benches for NBCSN was Kendall Coyne Schofield, an Olympic hockey gold medallist who recently drew headlines for her performance as the first female to compete in the NHL Skills Competition.

It got awkward right away, as Pierre welcomed Coyne Schofield to the airwaves.

As one of the best female hockey players in the world, this kind of an exchange didn’t sit well with many fans. Surely Coyne Schofield knew which side of the ice the Penguins and Lightning were on. Bet she’s heard of Sidney Crosby too.

To Coyne Schofield’s credit, she ignored the awkward intro and proceeded to set the game up like a seasoned veteran.

But the awkward exchanges didn’t stop there.

“I’ll be your cage tonight, how’s that?

“It’s like Canada-US in the gold medal game,” McGuire exclaimed after some rough play.

“Yeah, except I don’t have a cage on right now,” Coyne Schofield replied.

“I’ll be your cage tonight, how’s that?” said McGuire.

As you might imagine, there was significant outrage online.

Ironically, the NHL, as an industry, is a bigger enemy to itself than any of us grieving families/friends will ever be

Had a friend privately ask me why it’s worth making such a big deal about being treated like Kendall Coyne was by Pierre McGuire if “we all know how much she knows anyway”. Ultimately, it comes down to an inability to give your best showing. That’s not fair.

i know we're all talking about the condescension in how pierre mcguire treated kendall coyne like she's a random fan and not an olympian but i just gotta say that the way he continued to find reasons to touch her is familiar to women who work in sports. y'all don't do this to men

pierre mcguire should just never interact with a female ever again

Pierre McGuire, a great example of how far the NHL, broadcast, and sporting world has to go in respecting female athletes and reporters.

Lucky for everyone, Coyne Schofield moved up into the broadcast booth with John Forslund and Eddie Olczyk later in the game.

What an unforgettable night to cap off this incredible week. Thank you @NBCSports for the opportunity to be an analyst on #WNH alongside the best linemates in the business. I had SO much fun! I’m so excited to continue to learn & grow in this role! Thanks for all of the support! pic.twitter.com/BZkrAGIqTF