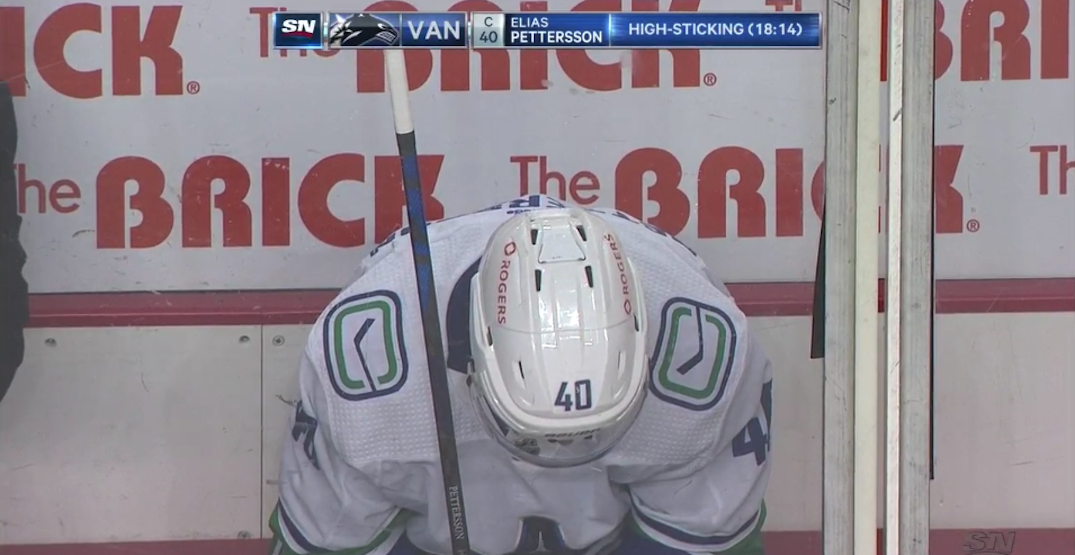 Frustration has set in for Elias Pettersson and the Vancouver Canucks.

After winning the season opener in Edmonton last week, the Canucks have now lost three games in a row, including a disheartening loss Monday night in Calgary.

After an excellent start to the game, the Canucks went into the first intermission with a 1-0 lead, outshooting the Flames 16-4.

Things fell apart in the second period though. The Canucks fell into penalty trouble and were outshot 20-3. The Flames scored three times in the middle frame, and wound up winning 5-2 — their second straight win over Vancouver.

No player was harder on himself after the game than Elias Pettersson, Vancouver’s best player, who has had a difficult start to the season. After notching an assist in his first game, Pettersson is now without a point in each of the Canucks’ three losses.

Pettersson took two second-period penalties, and owned up to them after the game.

“It’s very frustrating,” he said. “I took two dumb penalties. Not acceptable. They get momentum, and they’re good on the power play.”

The Flames scored while Pettersson was in the box for his second penalty, which was compounded after Tyler Myers’ roughing penalty to put the Canucks down two men. But the slash to Sean Monahan was undisciplined, as Pettersson was retaliating from a pair of crosschecks he received, 200 feet from his own net.

“It’s not going to happen again.”

Pettersson admitted that he’s not playing with much confidence right now, and criticized himself for playing too stationary.

“I need to move my feet. I’m an easy target. I’ve got to be better than that,” he said.

His coach thinks he may be squeezing his stick a bit now.

“He could be now,” said Green. “Probably he’s getting talked to a lot about it from other people and it does play on your mind a little bit. For example, when I come in here I’m asked about it every game, so I’m sure it’s on his mind. He’s a young player still, hasn’t had the start he wants.

“But that’s alright, he’s a great young player, he’ll get through it.”

Pettersson and the Canucks will get a chance to redeem themselves in Wednesday’s home opener, which is the first of three straight games against the Montreal Canadiens at Rogers Arena.