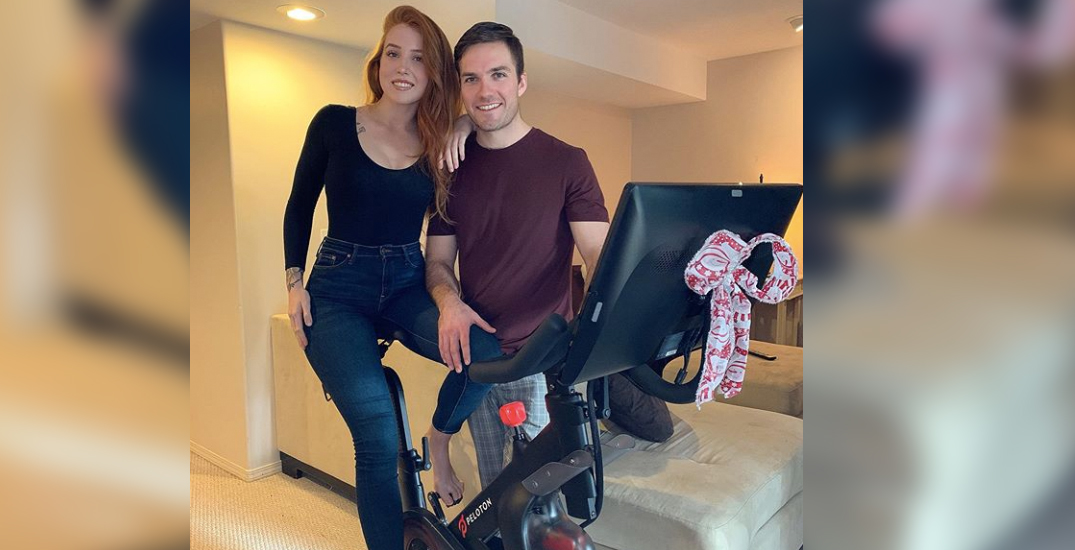 A Vancouver-based actor who plays the husband in the infamous Peloton commercial gave his girlfriend the high-end exercise bike for Christmas, and he says it went over better in real life than in the advertisement.

Sean Hunter shared a photo of girlfriend Cassidy Baras posing with him atop her new Peloton bike on Boxing Day — complete with a Christmas bow.

Here’s hoping this goes over better the second time…. Merry Christmas to my actual girlfriend (pls don’t leave me)🎄🚲

“I’m making light of the situation,” Hunter told Daily Hive in an interview. “I just thought it was a great way to end this little story.”

Peloton’s ad featuring Hunter and co-star Monica Ruiz (the Peloton Wife) received negative backlash when it was released in November, with some people calling the gift rude for implying the already-fit wife should work out more.

People also picked up on Ruiz’s somewhat scared expression as she vlogged her experience using the Peloton, and some suggested her husband was forcing her to work out.

So sweet. My husband was inspired by the Peloton ad to get me a pair of pants in a child’s medium and a handwritten note that says “Don’t fucking touch me till you can fit into these”

Then Ryan Reynolds’ gin company, Aviation Gin, hopped in with its own commercial implying the couple had split up after the Peloton gift incident. The company cast Ruiz drinking martinis with girlfriends, ostensibly after a breakup.

Hunter works as a gym teacher in Vancouver, and at first he was discouraged by the negative backlash to a fitness-focused gift.

“These are just made-up dialogues,” he said of Twitter takes calling his character mean for buying the bike for the fictional wife.

But as the Peloton commercial had its moment, Hunter leaned in by changing his Instagram handle to @pelotonhusband and doing interviews about the commercial and its detractors.

He decided to get girlfriend Baras the bike after she mentioned a Peloton would be a good gift, something many people would be happy to receive.

When his buyout cheque from the commercial came in bigger than expected, he decided to spend it on the piece of workout equipment for Baras. He confirmed the Instagram post was not sponsored by Peloton.

In Canada, the bike retails for $2,950 plus a membership fee of $49 per month to take part in Peloton’s virtual spin classes.

“She was so excited, but then like, really? Are you serious?” Hunter said, recounting Baras receiving the bike delivery just before Christmas.

The couple has not decided if they will vlog their experience with the bike.