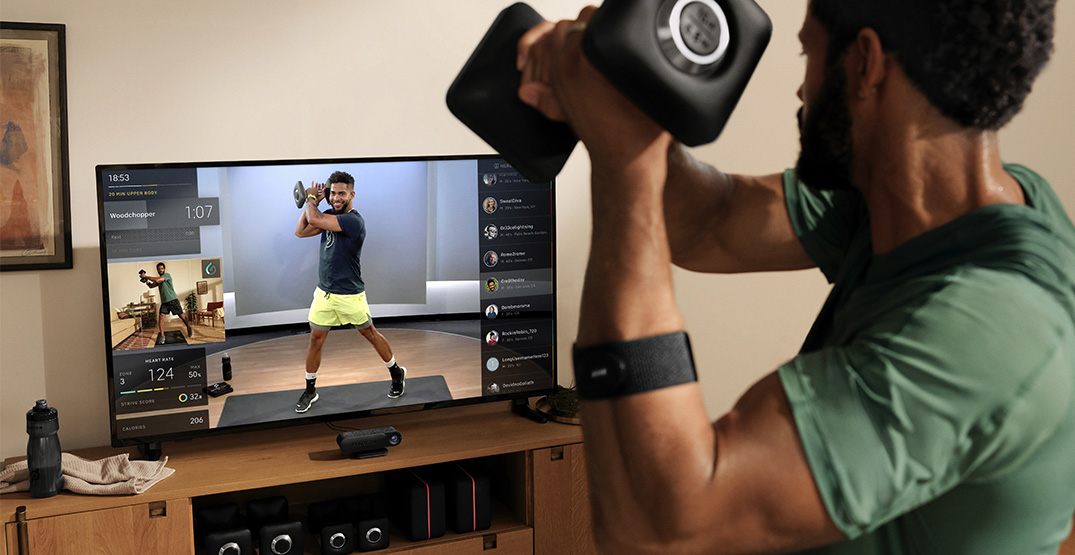 If you’re like me, the thought of working out in public at a gym can be daunting, especially when it comes to strength training.

Exercise machines can be intimidating to figure out, and the possibility of being judged by gym bros doesn’t help either. I always find myself ending up on the treadmill a majority of the time, a safe space for someone whose go-to workout is going for runs to a nearby park (which also happens to be near a gelato shop).

After living through a two-year pandemic that kept us indoors, I found a workaround, following “no equipment” exercise videos on Instagram, YouTube, and TikTok. I’ve saved dozens of routines posted by fitness influencers but never really knew if I was executing them properly. At the beginning of this year, I found myself unmotivated and replacing evening exercises with long naps.

So, when I found out about Peloton’s new home workout technology, I was excited to see if it would help reinvigorate my exercise routine.

What exactly is the Peloton Guide? To put it simply, it’s a legit version of the early aughts exercise game, Wii Fit. According to the New York-based brand that’s most known for bringing spin classes into peoples’ homes, the Peloton Guide is a device that connects to your TV to transform it “into an interactive personal training studio.”

While Peloton already has an app filled with on-demand workout classes, the Guide’s smart camera technology tracks your movement and aims to make sure that your form is correct and that you’re completing each move properly.

Setting up the Peloton Guide is just like setting up a gaming console. I own a Nintendo Switch, so it was a similar process in terms of wires and connecting it to my TV.

The Guide includes the smart camera device, which looks like a large webcam (remember those?), the mount for the camera, a remote (with batteries included!), power cable, HDMI cable, and power adapter. 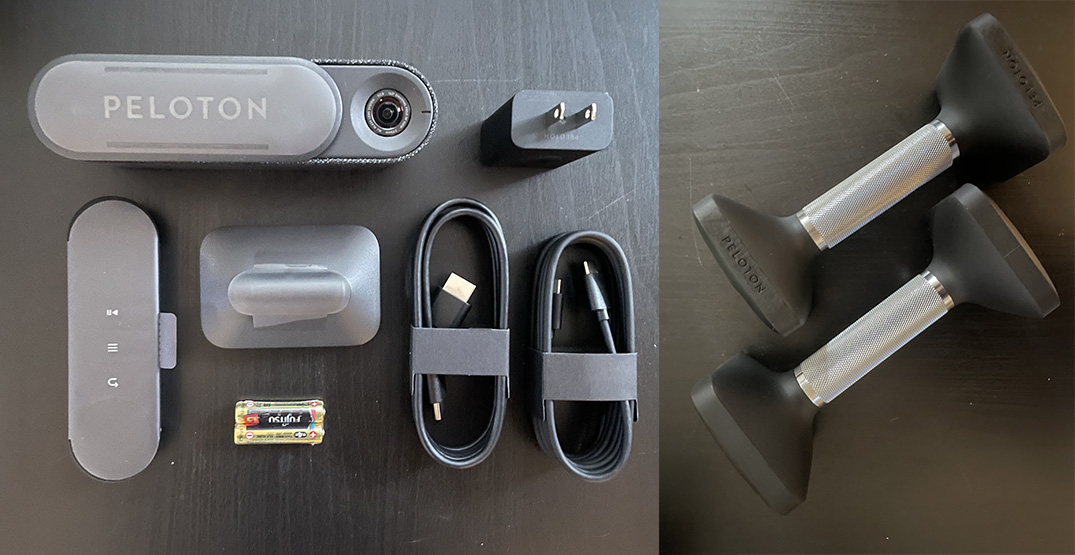 The price for just the device starts at $395, but you also can buy a starter package, which includes a choice of five to 30-pound dumbbells and a workout mat for a heftier $695.

While the device itself doesn’t take up much space — you can mount it on top of your TV or place it on the stand — you need to have enough room (at least 4.5 x 6 feet according to Peloton) to ensure that the camera can capture all of your movements.

I live in a moderately sized apartment in Toronto and am lucky enough to have a designated living room space. The area between my TV and couch is tight, but just enough to lay a mat long side facing the camera for better tracking.

The quick setup manual is easy to follow, showing users where to connect the wires. As you can see, my TV is an old, clunky Toshiba, but it has an HDMI port, which is a requirement to use the Guide. All of this to say, you don’t need a super fancy smart TV to use the device.

Once you’re connected, the manual directs you to onepeloton.com/setup/guide, which helps you set up the user interface and activate your account (if you don’t already have one).

The Guide calibrates the camera once you start it up. I was a little skeptical about the camera’s ability to capture me and my mat in the frame, given the cramped space, but that’s where the magnetic mount came in handy. I adjusted the camera up and down slightly and was able to find a position that allowed it to recognize my movements.

Overall the setup was quick and painless — now it’s time for the sweat test.

As I mentioned earlier, my workouts are mostly cardio- (and ice cream-) driven, so it was nice learning how to focus on strength from the Peloton instructors properly.

Their team of trainers created specific classes to use in tandem with the Guide. Any workout with a bit of a circular icon in the bottom right-hand corner means it’s made for the Guide’s movement tracker. Under classes, you’ll find strength-specific exercises that work with the movement tracker.

I’ve used the device for about two weeks now on core, upper body, and full-body workouts. When I follow Instagram or TikTok exercises on my own, I always find myself focussing on quantity over quality. How fast and how many times can I do this move in one minute?

The Guide and its instructors focus on the quality of form, making sure you follow through with your movements. How does it do this? Other than the trainers reminding you to adjust your body accordingly, the Guide’s camera follows your actions and records them on the movement tracker, a circular meter on the top right corner of your workouts that fills up as you finish each move. The camera also allows you to view yourself side by side with the instructor, which is helpful to see if you’re doing the exercise correctly.

If you’ve fully followed through with an action, the tracker will alert you with a sound indicating that it’s complete. The same thing happens when you’re not able to fill the tracker.

Filling up the movement tracker is a good nugget of motivation. If you’re an Apple Watch user, it’s the same serotonin boost you get from filling in your move rings. I found myself more aware of how my body was moving and less flimsy with my form.

The results were maybe fewer reps in a set, but I felt more of a satisfying burn, learning how to target each muscle with the correct movements.

At its base price of $395, the Peloton Guide is worth it if you’re someone who wants an effective home workout device that makes it easy to have a consistent exercise routine.

I was pleasantly surprised by the variety of workouts I found and the ability to search for classes based on what parts of the body you want to focus on, difficulty, and length. For example, I wanted a quick five-minute core workout for beginners, so I used those filters to narrow down the classes. 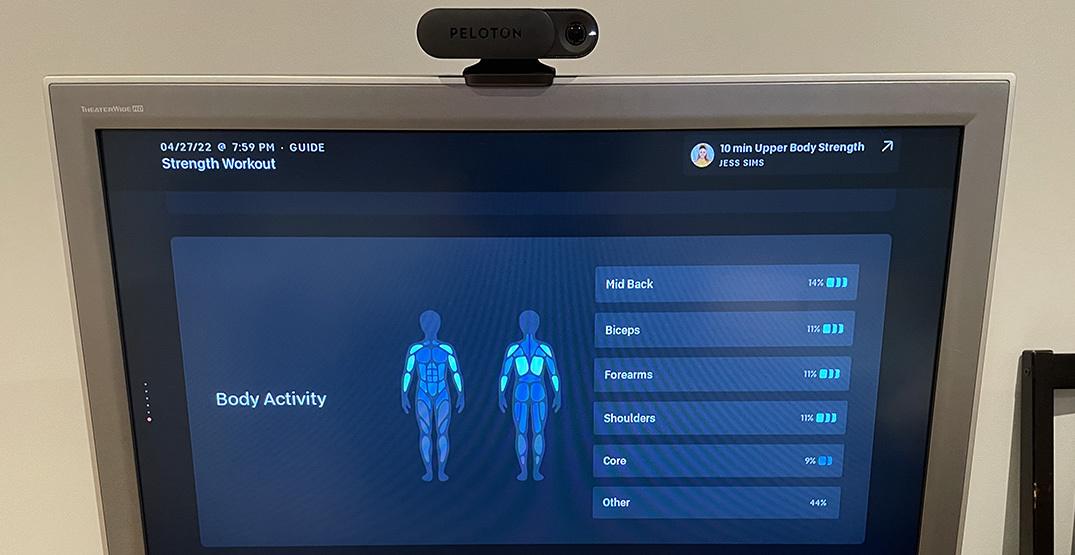 There are also specific workout programs catered to bodybuilders, runners, and more.

As for the Guide’s smart camera tech, I was impressed by how accurate it was. I would say it tracked about 90% of my movements. The quality of the video was also smooth and never lagged.

The only thing that makes the Guide pricier than a basic gym membership is the $30 to $55 per month Peloton account. The cheapest gym membership I’ve seen in Toronto is $15 a month; however, it’ll be up to you to curate a workout routine for yourself.

What might make the Peloton account worthwhile is that you don’t have to pay monthly fees for different kinds of exercise classes if you’re one to do pilates one week and strength another.

Compared to its competitors, Peloton sells the least expensive and most portable home workout device. Lululemon’s MIRROR and Tonal’s strength training machine both cost over $2,000 and are large devices that require a designated spot in your home.

Overall, for a gym introvert like myself, this is the perfect way to ingest physical activity in my day from the comfort of my living room. I think it’ll also help build confidence if I ever want to flex on the gym bros in person.