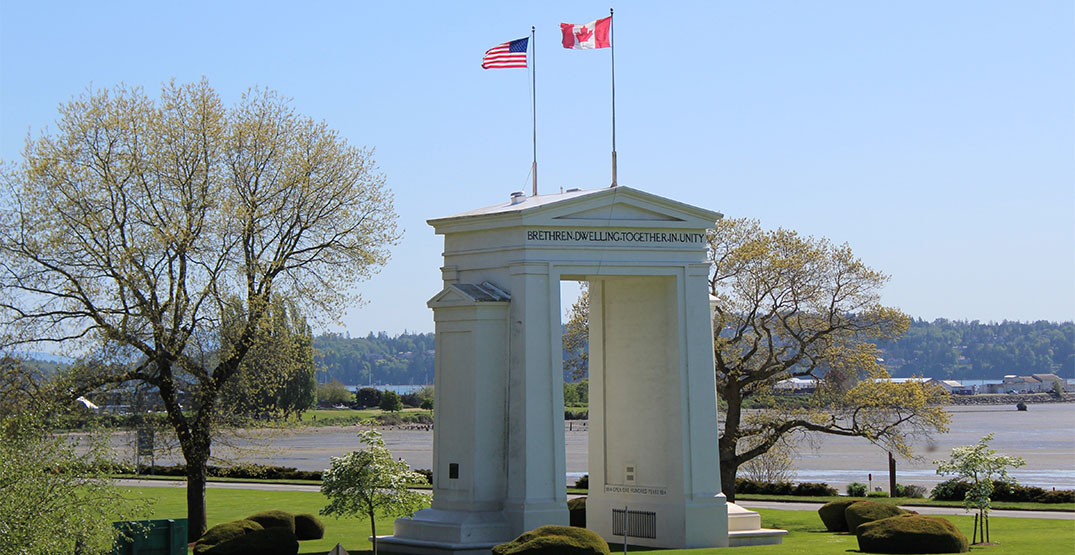 Residents living close to Peace Arch Provincial Park along the US boarder have taken to social media to share their concerns about people continuing to meet there despite new orders from Dr. Bonnie Henry forbidding both indoor and outdoor gatherings.

The concern is not only that people are gathering but that they may also be meeting friends or family from the US and then going back to their BC communities.

The park straddles the Canada-US border, and in normal times residents of both countries can use it without technically crossing the border, as long as they return to their own side.

The park was closed along with all BC provincial parks early in the pandemic, and then closed again in the summer after seeing overwhelming traffic and vehicles parked on the side of the road.

On November 8, BC resident Tonia Latchford shared video footage on Facebook of lines of cars parked near Peace Arch Park again, and dozens of tents set up on the grass.

It wasn’t clear from the video how many people were in each tent, or whether they were from the same household or not. However, Latchford was concerned the tents could have contained people from both sides of the border mingling in a pseudo-indoor environment.

“We can’t have a funeral for a family member or mourn together but this is ok?” she wrote, calling it a double standard.

This is complete BS! We are following Dr Bonnie’s lock down rules but this crap can happen? Canadians jump a ditch to US side of Peace Arch Park. No customs checks, and NO QUARANTINING? ⁦@DrBonnieHenry⁩ ⁦@sophielui⁩ ⁦@keithbaldrey⁩ ⁦⁦@Fraserhealth⁩ pic.twitter.com/2fTmIk0z8y

Those in Peace Arch Park were there in the afternoon, before Henry’s no-gathering order came into effect at 10 pm.

At a news conference Monday, Henry said she hasn’t heard of any COVID-19 transmission related to outdoor meetings at that park.

“There are people that monitor that park,” she said. “The border itself is a federal jurisdiction, and I know they have enhanced patrols in that area.”

Daily Hive has reached out to BC’s Environment Ministry (responsible for BC Parks) and the RCMP to ask about current rules for US and Canadian citizens meeting at Peace Arch Park.

The Canada Border Services Agency, which patrols border crossings, said it’s not responsible for enforcement at Peace Arch Park because it’s not an official point of entry.