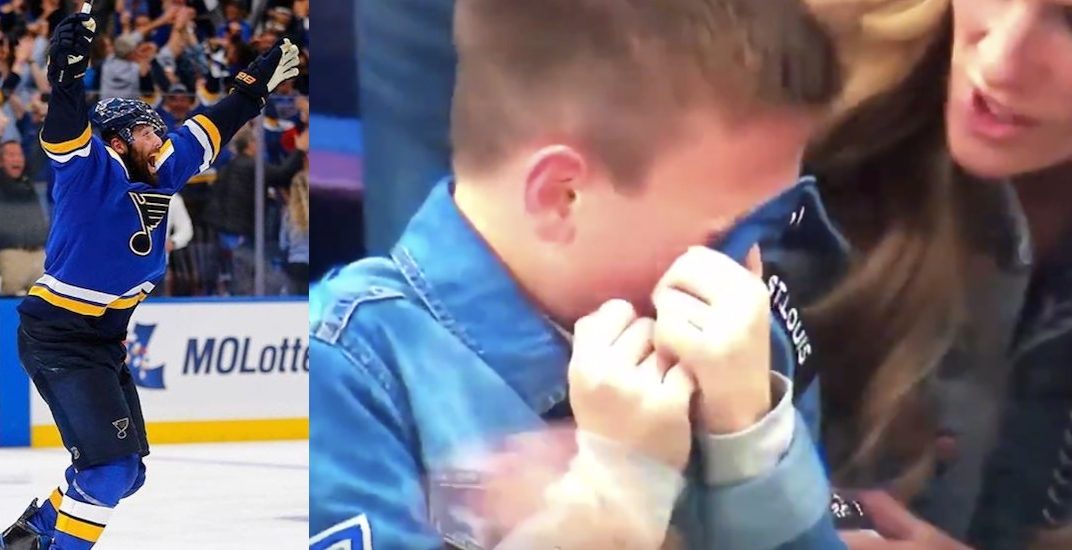 Patrick Maroon had a night that he, and his son, will never forget.

A St Louis native, playing for the Blues means a lot to Maroon, and not just because it’s the team he grew up watching.

Signing as a free agent last summer, playing for his hometown team meant Maroon got to spend more time with his 10-year-old son Anthony.

Maroon, 31, has had stops all over North America during Anthony’s life – including Anaheim, Edmonton, and New Jersey in the NHL – but never anywhere close to home until now. Through it all, Anthony has stayed back in Missouri with his mother, who had a previous relationship with Maroon.

“That takes a toll on you sometimes as a dad,” Maroon said shortly after signing with the Blues in July. “It’s hard being away from your son like that.”

“We both started tearing up a little bit because it’s a special thing,” Maroon added. “I’ve been away from him for nine years and like you saw two years ago where I kind of broke down, and I haven’t seen him for five months.”

Maroon got emotional following a game in St Louis in December 2016 when he was with the Edmonton Oilers.

A couple years ago Patrick Maroon got super emotional scoring in St. Louis (as a visitor) with his son in the crowd. His son was in the crowd to watch him score for the Blues in Game 7 double overtime. Pretty awesome pic.twitter.com/mYm4p52JeA

These are heartwarming moments, but they pale in comparison to what happened on Tuesday night.

Maroon scored the Game 7 winning goal in double overtime, lifting the Blues into the Conference Final in a 2-1 victory over the Dallas Stars.

Anthony was in the crowd watching of course, and broke down with tears of joy. What a beautiful moment:

💙💙💙@patmaroon wanted to play closer to his family and they couldn't be happier for him! pic.twitter.com/C7NAgjrCwe

After the game, Anthony stole the show, posing for photos with his dad and even answering some questions from reporters in a media scrum.

"I may have taught him a thing or two."
– Pat Maroon's 10-yr-old son Anthony on his dad, the St. Louis native who is a hometown hero after scoring series-winning goal in Gm 7 double OT for #stlblues. Anthony said he "cried" when his dad scored. "I'm proud of him." pic.twitter.com/CTYfDEjyWs

“I dreamt of this my whole life, and I got it done,” Maroon said, in interview with Fox Sports Midwest. “[My son] was crying in the stands. I saw him. Emotional night for the Maroon family.”

“All I heard was everybody screaming and my friend turns around and goes ‘it’s your dad!’ And then I went on the seat and just started crying,” Anthony told reporters.

Pat Maroon scores the game-winner for his hometown in double-OT, then his 10-year-old son, Anthony steals the show in the locker room:

"I mean, I might have taught him a few things." #STLBlues pic.twitter.com/1F3WHm4fKU

The Blues now await the winner of the last remaining second-round series between the San Jose Sharks and Colorado Avalanche, who play Game 7 tonight. The Eastern Conference Final between the Boston Bruins and Carolina Hurricanes begins on Thursday.

St Louis has never won the Stanley Cup and hasn’t been to the Final since 1970. They’ve been on a remarkable run since early January, when they sat in last place in the entire league standings.

So they enjoyed this one – and not just because of their kick-ass victory song.

You think the broadcast booth was excited?! #WeAllBleedBlue #stlblues pic.twitter.com/JnG5yN2Ic3