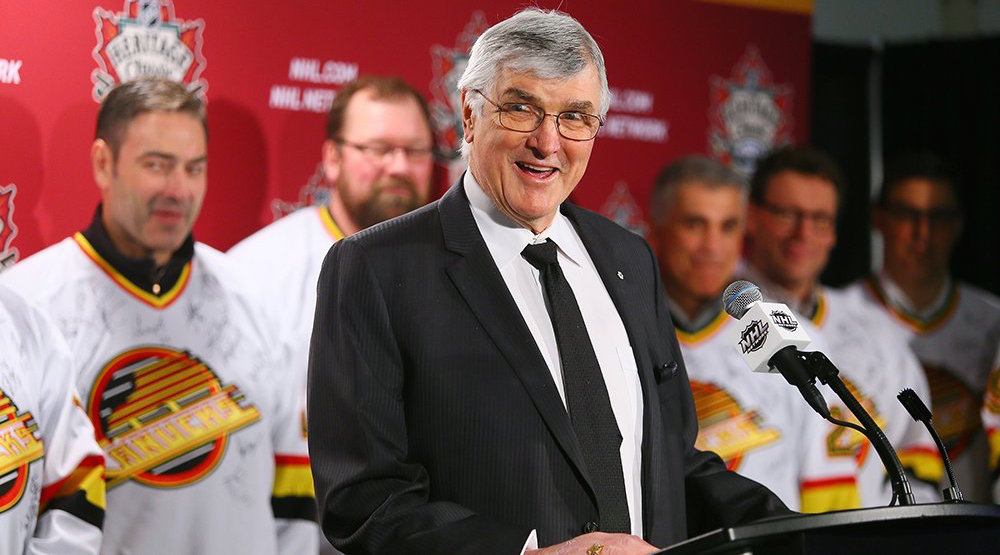 Canucks fans are invited to a ceremonial unveiling of a statue of Pat Quinn at the north Plaza of Rogers Arena today, near the corner of Abbott Street and Pat Quinn Way. The statue will be unveiled before Vancouver’s game against the Calgary Flames, at 6:15 pm.

The former player, coach, general manager, and president left an everlasting impact on the Canucks organization, and creating a permanent legacy for the man who left this world too soon is fitting.

Quinn, who was inducted into the Hockey Hall of Fame last year, is already in the team’s Ring of Honour and has a street outside of the arena named after him.

The life-sized statue is part of a legacy project created by a small group of Quinn’s former colleagues, partners, family friends, and fans who wanted to create a permanent legacy of his impact on hockey and Canadians.

The statue depicts Quinn coaching the Canucks during their run to the 1994 Stanley Cup Final. It includes him holding a roster card engraved with each player’s name from the 1994 roster.

The statue also includes “Pat’s Bench” for fans to sit and have their photos taken. The idea came from Quinn’s time at the 2002 Olympics in Salt Lake City. During the Games, Quinn would often sit on a particular bench outside of Canada House, and athletes from all sports would come over to talk to him.

The bronze statue was created by Norm Williams, one of Canada’s pre-eminent sculptors and creator of the nearby Roger Neilson statue.

Quinn’s legacy will also be reflected through the Pat Quinn Scholarship fund which is in currently in the development stages with Hockey Canada.

Fan are encouraged to dress warmly and arrive early for the ceremony and unveiling of the statue prior to the Canucks game versus the Calgary Flames.