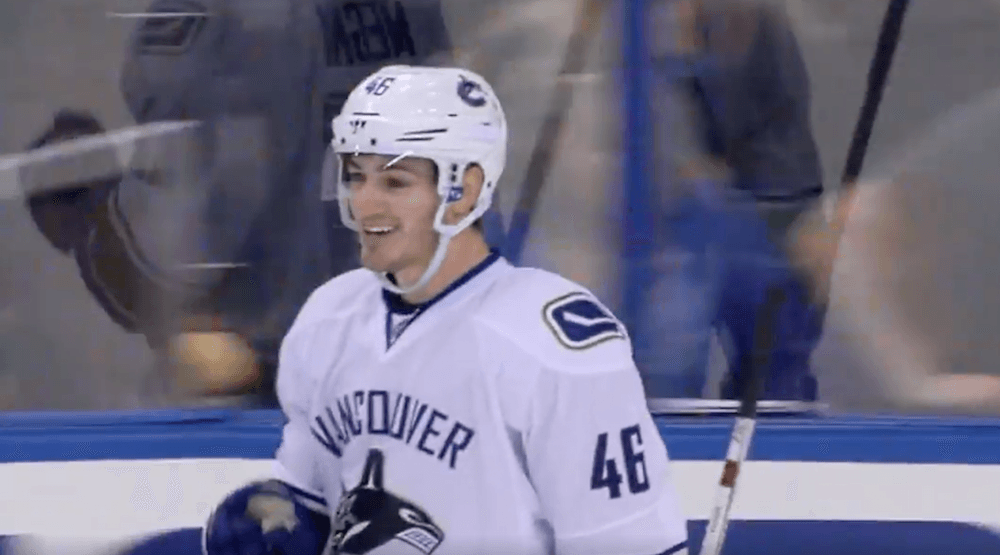 For once I agree with David Pratt: tonight’s game against the Flames is must-win for the Canucks.

Well, as close to “must-win” as you can get at this point in the season, anyway.

The Canucks gained just four points out of a possible 12 from their eastern road trip. As has been the refrain for most of the season, Vancouver worked hard, but simply did not have enough talent to pull out points in games they deserved to win.

Don’t forget to arrive early to witness the unveiling of the Pat Quinn statue at Toyota Plaza at 6:15pm.

The only lineup change from last game will be Brendan Gaunce getting back into the lineup at the expense of Reid Boucher. Ryan Miller gets the start after Jacob Markstrom stumbled in St. Louis.

Bo Horvat and Brandon Sutter will be in the lineup once again, although Sutter’s wrist appears to not be 100%.

Get ready to be outraged, Canucks fans…

That’s right. Jayson Megna will get top-unit power play time tonight. As one of the few right-shot forwards on the team, Willie Desjardins appears to have him replacing Sutter on PP1.

1. Where are the Canucks at?

There is positive spin.

Biggest surprise of 2-4-0 #Canucks trip: They gather 4 pts in 10 days and their 5-pt playoff deficit stays the same. #turtlederby

Then there is reality.

Benning said on the Canucks Lunch that he wanted to see the Canucks 6 games before the deadline to see their status.. Not needed.. Done

Tonight’s game against the Flames is as close to a “must-win” as it gets with 24 games remaining in the season. The Canucks simply have too many teams in front of them and they cannot afford to lose against a division rival holding down the last wild card spot.

Win or lose, it is likely a moot point anyways. The odds are stacked against them.

Nevertheless, Canucks fans have to admire this Vancouver team that does not stop working. This team is high on effort and shy on talent.

Expect the team to come out flying tonight.

2. Edler the most under-appreciated defenceman in Canucks history?

In the last preview I wrote, I revealed that I have a serious case of “Tryamkin fever.”

Canucks Twitter is littered with Tryamkin dialogue and, as I researched some hot topics for tonight’s game, I have to admit that I went out of my way looking for an angle to bring up the big Russian defenceman again.

Is Alex Edler not the most under-appreciated defenceman in Canuck history?

Maybe it is the broken sticks?

The Mayor has given up on #Edler. Can't pass, scared to hit, could shoot but always breaks his stick.Get something for him #Benning #Canucks

The 30-year-old Swedish rearguard has been taken for granted in this market. He may not be a true #1 defenceman, but he is a solid #2 on most teams and he is a warrior for the Canucks. Edler, night in and night out, quietly plays against every opposing team’s top offensive players and regularly tops the team in minutes played. He is worth every bit of his $5 million cap hit (I’m talking to you Farhan Lalji) and should be talked about more.

In likely the most important game of the season, key in on Edler’s play. He has the ability to change a game when he is playing at his peak. Let’s hope he has his A game tonight.

"It's a high-pressure game, everybody's battling … that's the way the game's supposed to be played." https://t.co/BPAIQkEuoS

Canucks Nation knew the time would come that “Canucks Legend” Matt Bartowski returned to Rogers Arena in a different uniform. It is probably better that it happened sooner than later. I just hope the tribute video does him justice.

Will Beth be in the house?

Hunter Shinkaruk continues to rip up the AHL in Stockton with 19 points (7 goals, 12 assists) in 27 games.

The Flames are 5-5-0 in their last 10 games and sit fourth in the Pacific Division.

The Canucks are in a tough spot tonight coming off a gruelling six-game road trip over 10 nights. Vancouver will work their tails off, but wind up on the losing end of a 4-2 game. To make matters worse, the game winning goal is scored by Tkachuk assisted by Bartowski.