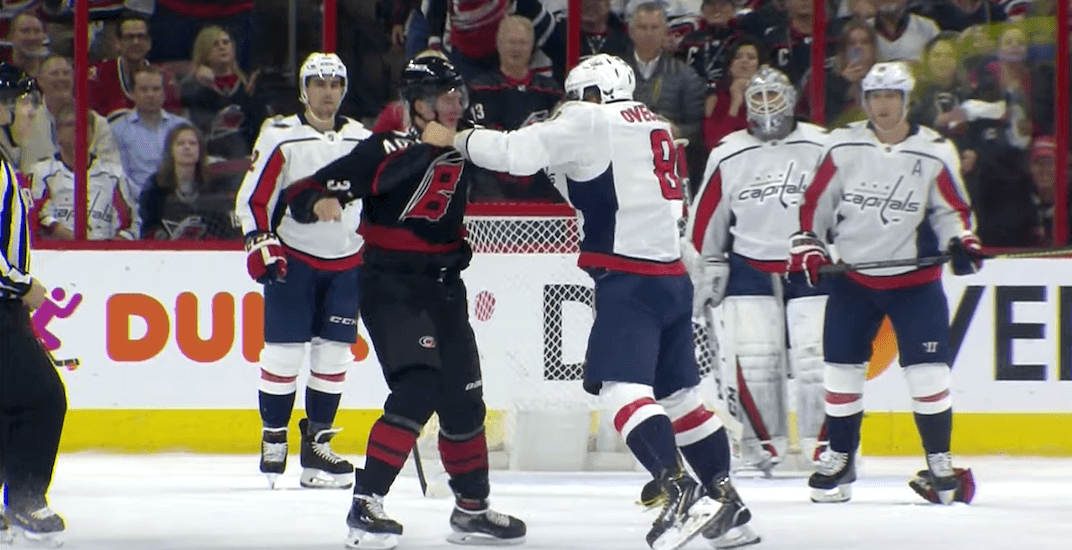 Their first playoff win in nearly 10 years came at a cost for the Carolina Hurricanes on Monday night.

In a bout featuring a pair of unlikely combatants, 19-year-old rookie Andrei Svechnikov was knocked out in a first-period fight by 33-year-old Washington Capitals captain Alex Ovechkin.

As one of the greatest goal scorers of all-time, Ovechkin doesn’t fight very often. Monday’s bout was just the fourth fight of his career, and the first in eight years. Svechnikov’s participation in the fight was even more surprising, given Ovechkin must have been a hero for him growing up in Russia — not to mention the fact that he gave up 40 pounds to the future Hall of Famer.

The Hurricanes weren’t happy with Ovechkin, as you can imagine, with head coach Rod Brind’Amour saying that the Capitals forward jumped Svechnikov.

Brind'Amour: "One guy’s gloves comes off way first. And that’s Ovi, not our guy. So it’s a little bit frustrating because he got hurt. It's his first fight. He's played 90 games. He’s never fought in his life, and I'm pretty sure Ovi knew that. So that stuff bothers me.”

Here are Rod Brind'Amour's thoughts on the Andrei Svechnikov/Alex Ovechkin fight. Does not have an update on Svechnikov, said he left the building before the game was over. pic.twitter.com/bi95lwEdDY

Ovechkin, for his part, says that Svechnikov challenged him.

There’s some debate about Ovechkin’s explanation, with Brind’Amour saying Tuesday that “there’s two versions” of the story.

Asked if Svechkinov confirmed Ovechkin's account that Svechnikov asked Ovechkin to fight. Rod Brind'Amour said, "There's two versions of that going around. I'll just leave it at that."

The “code” for this type of fight is a little murky. Targeting a smaller rookie in a fight is completely against hockey decorum, though if Svechnikov was looking for trouble as Ovechkin contends, that unwritten rule goes out the window.

The Hurricanes went on to win the game 5-0, cutting Washington’s series lead in half with Game 4 scheduled for Thursday in North Carolina. Svechnikov, who went to hospital after the fight, will miss the next game (and probably more) with a concussion.