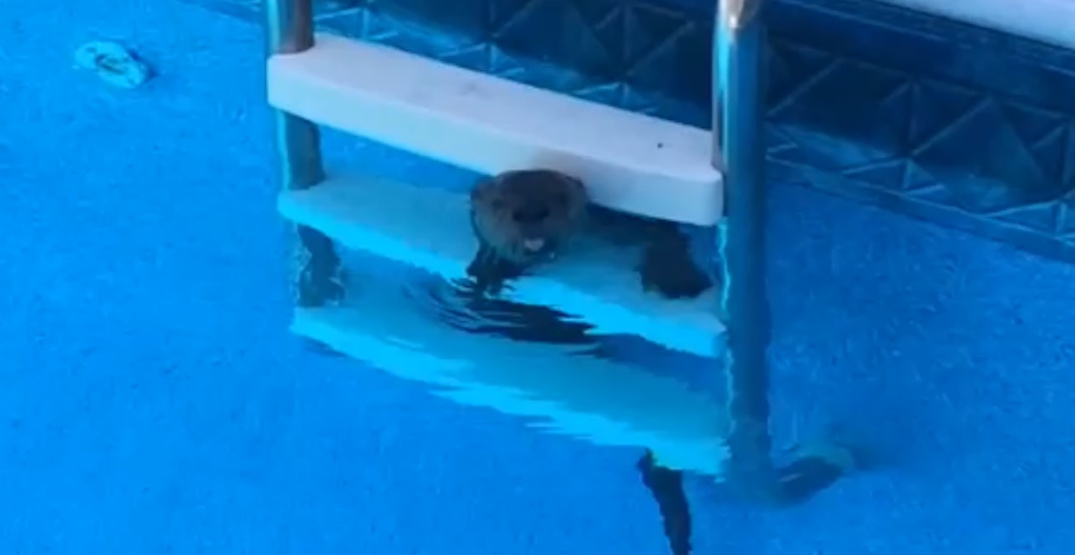 The sight of a river otter pacing back and forth in the backyard swimming pool was a brief moment of amusement for a Vancouver family late Monday morning.

A video posted onto Instagram by Jasmine Sallay-Carrington shows their dog barking at the animal in the pool, with someone yelling, “oh my god!”

The otter is seen swimming around the perimeter of the pool, before climbing out and dashing below a fence — out of the backyard.

No koi were harmed in the filming of this video. 😅

Jasmine Sallay-Carrington captured this otter swimming in her backyard pool near Jericho Beach this morning. They believe it’s lost, living in a neighbour’s yard. #Vancouver pic.twitter.com/wUpXA1eMKk

“My sister was outside and yelled that there was an otter in the pool so we all ran down,” Sallay-Carrington told Daily Hive.

“He didn’t stay in there for too long and scurried away under our fence.”

The family believes the otter could be disoriented or is having difficulty with finding natural water. Their neighbour thinks the animal has been living in their yard over the past few days.

Their residence is located near Jericho Beach, where sightings of otters are not uncommon.

Apart from the family’s need to clean their pool in this instance, not all otter incursions into urban environments are inconsequential. An otter caused havoc at Dr. Sun Yat-Sen Garden in late 2018, forcing the attraction’s temporary closure in a bid to save as many prized koi as possible. It feasted on about a dozen fish, including several that were very old and large.

An otter made a reappearance at the garden almost exactly a year later, prompting the Vancouver Park Board to drain the pond and evacuate about 80 koi. It is unclear if it was the same otter.