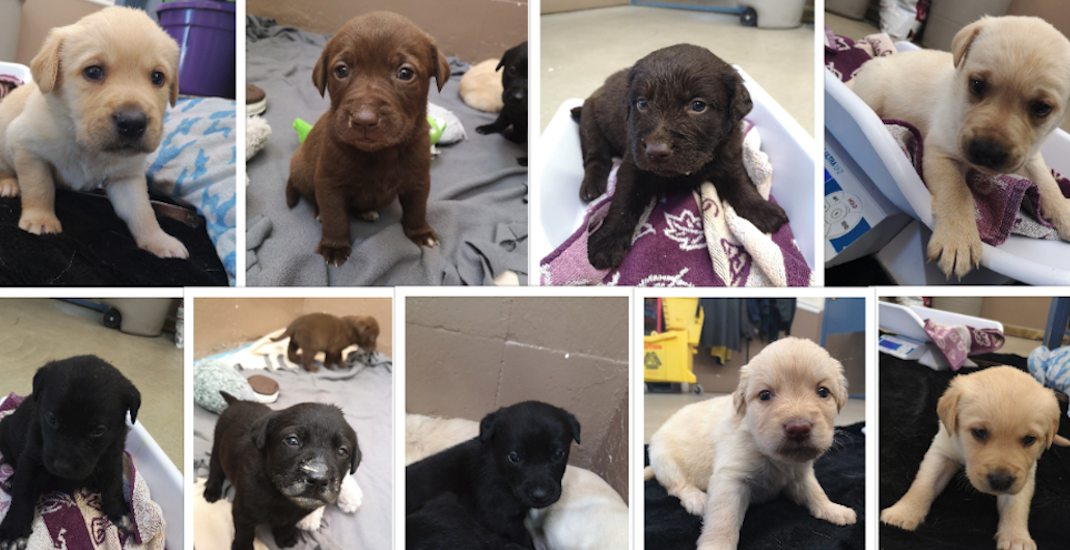 The BC SPCA in Fort St. John is caring for nine puppies and their mom, who were discovered and brought to the vet by a Good Samaritan.

In a release, Lorie Chortyk, general manager of communications for the BC SPCA, says it’s unclear what happened to the mother.

“We don’t know exactly what happened to the mother, Nova, but she was underweight and had suffered severe physical trauma to her back and neck that left her with swelling around her spine and two dislocated shoulders,” said Chortyk, adding that Nova is also “enduring the constant discomfort of ear mites and a skin rash.”

Now, the BC SPCA’s focus is ensuring Nova receives proper treatment, which includes taking multiple medications, strict cage rest, and physiotherapy. Unfortunately, Nova is unable to feed her puppies because of the medications she is receiving.

“Despite the agonizing pain she has been in, she has been such a devoted mom, but now it’s time to let her rest and recover while we look after her babies,” said Chortyk.

“Staff and foster volunteers have been providing supplemented feedings for the nine puppies multiple times a day to ensure they grow strong and healthy.”

The BC SPCA says Nova will need at least four months of recovery before she is able to be adopted, and the puppies will not be available to adopt for at least five weeks.

The organization says donations are appreciated now more than ever and announced it has $100,000 in matching funds available for the #GivingTuesdayNow campaign being held as an emergency response to COVID-19.

“We are so grateful for the generosity of Audrey Johnson, Ian and Rosemary Mottershead, Rendal and Leah Tschritter and two anonymous donors who have made this possible,” said Chortyk. Donations can be made online and those interested in adopting animals in need of loving homes are encouraged to check the BC SPCA’s website.