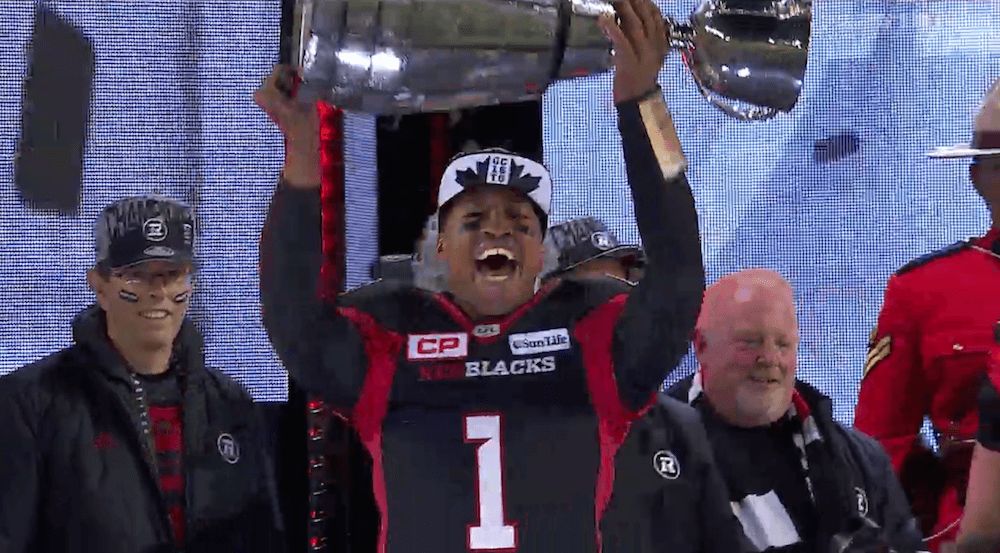 In a week that started with the 15-win Stampeders opening as nine-point favourites and saw the team take home five individual trophies at the CFL Awards, Sunday evening was supposed to culminate with Calgary coasting to their second Grey Cup victory in three seasons.

Instead, Ottawa surprised many by jumping out to a 20-point lead in the second half. The Stamps rallied back though, forcing overtime for just the third time in Grey Cup history when Rene Paredes knocked through a game-tying field goal with 10 seconds left.

But it was Ernest Jackson’s juggling touchdown catch in overtime from the arm of Henry Burris that led Ottawa Redblacks into Toronto and slayed the mighty Stampeders by a score of 39-33 in front of 33,421 fans at BMO Field in Toronto.

Burris sent fans and media into a frenzy when his knee locked up in pregame warm-ups and was rumoured to be a late scratch.

“There was almost a situation where I wasn’t able to play today,” Burris said. “My knee locked up on me before the game. I wouldn’t have been able to accept that.”

Not only did Burris play, he was outstanding, being named Grey Cup Most Valuable Player as he threw for 461 yards and three scores and added another on the ground.

“It feels special. All we’ve been through, and for the team to peak at the right time, I’m very thankful that I was a part of that.”

Ottawa wide receiver Brad Sinopoli, who made six receptions for 94 yards and one touchdown, was named Most Valuable Canadian. 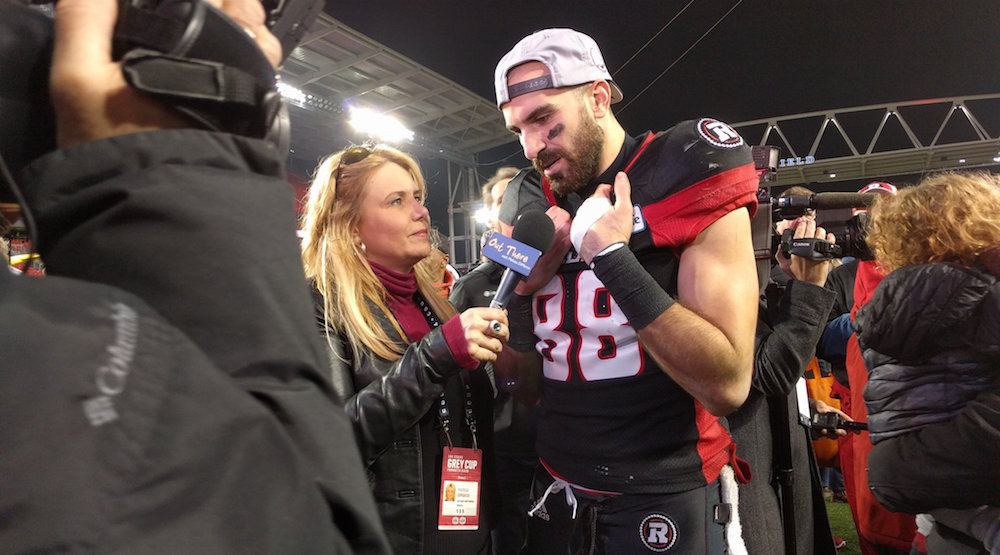 Not much went right for the CFL’s Most Outstanding Player Bo Levi Mitchell early on in the game, who looked uncharacteristically flustered at various times during the beautiful late November night, as he lobbed an ugly interception in the opening half. Losing his most trusted receiver in Marquay McDaniel early in the game after a 51-yard gain early in the first quarter compounded Mitchell’s issues in the game.

A third interception from Mitchell! He only had eight all year, and then throws three in the #GreyCup. Craziness! #CFL

Mitchell, who passed for 391 yards, did manage to right the Stampeders in the second half as the team rallied back from a 27-7 third quarter deficit and made the game 27-23 early in the fourth quarter.

But the story of this night was the 41-year-old Henry Burris, who completed a variety of passes with the type of precision that accompanies a game from “Good Hank.” The well-traveled Redblacks quarterback almost seemed to be showing off as he displayed arm strength and touch on a variety of passes while converting second downs of various lengths throughout the game.

The Redblacks bring the Grey Cup back to Ottawa for the first time since 1976.

The #GreyCup visits with #RNation at #BMO. #CFL pic.twitter.com/WCVXQ9MXjZ