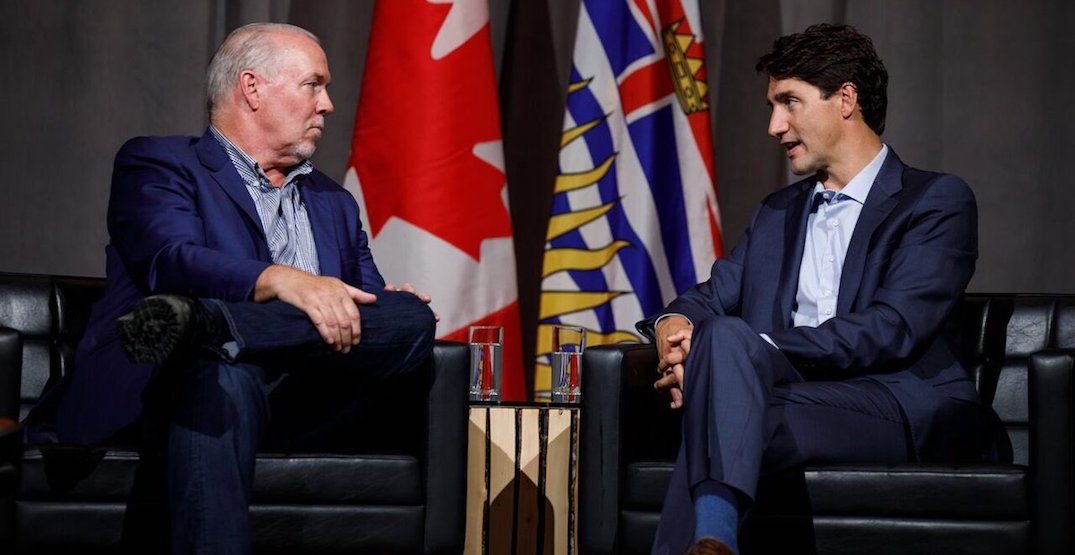 BC Premier John Horgan is breathing a heavy sigh of relief following a federal election that returned to power his preferred prime minister, and ensures billions of dollars in funding for childcare, SkyTrain, and climate change goes largely uninterrupted.

Liberal leader Justin Trudeau’s re-election to a minority government was the best-case scenario for the BC NDP government. It keeps in place the avalanche of federal cash that Trudeau spread across the province prior to, and during, the election campaign. And it avoids BC having to abruptly change course on things like the carbon tax, which the province pioneered but federal Conservative leader Erin O’Toole was threatening to scrap in favour of a convoluted new system of personal carbon savings accounts.

Congratulations to Prime Minister @JustinTrudeau. I look forward to continuing our work to help improve the lives of British Columbians.

You might have thought Horgan would be disappointed that federal NDP leader Jagmeet Singh failed to surge from a distant third place and into government.

But the BC premier, now into his second term, is a realist. He knew the federal NDP had no chance of winning. Faced with a choice between the Liberals and Conservatives, he chose to appear alongside Trudeau for several events in the weeks prior to the election call, very subtly endorsing his decisions to partner with the BC government on key files that benefited both parties.

Then, Horgan stayed out of the campaign, offering only a muted last-minute tweet before election day saying he voted for the incumbent NDP candidate in his own riding in Langford on Vancouver Island. He didn’t campaign alongside Singh, nor did he throw his considerable support in Metro Vancouver to the federal NDP by stumping with candidates in swing metro ridings where his poll-topping popularity could have made a difference in tight margins.

Horgan played it safe, and in doing so made absolutely the right call. He emerges now with the best of both worlds — a Liberal Prime Minister with whom he has a strong working relationship and a federal NDP leader who holds the balance of power in the new minority parliament.

BC desperately did not want to lose $3.2 billion in federal funding for $10-a-day childcare, which would have happened had the Conservatives won on Monday night and tried to change childcare into a new tax credit program.

Without the federal cash, BC was stalling out on its $10-a-day promise from the 2017 and 2020 campaigns. Trudeau bailed Horgan out. Both leaders now stand to benefit from the arrangement.

It’s the same thing on SkyTrain, where Trudeau promised in July $1.3 billion in additional federal funding to extend the proposed Surrey addition the way out to Langley. This was something BC wanted to do as well but couldn’t afford on its own. The Conservatives probably would have kept this funding in place, but they did a poor job of saying that clearly and loudly during the election.

On housing and homelessness, the Horgan government found itself better aligned with Trudeau than O’Toole as well. Billions in federal cash already planned for housing affordability projects in and around Metro Vancouver continue as a result of Monday’s election.

Not everything, though, was about money.

BC is getting hammered by anti-vaxxers for its decision to push forward with a vaccine passport system, as well as mandatory vaccination requirements for workers in the health care and seniors’ care sectors.

The Conservatives failed to articulate support for vaccine passports, instead leaving open a mess of optional vaccinations, rapid tests and freedom of personal choice that did not align with the direction being taken by Dr. Bonnie Henry or Health Minister Adrian Dix. In a much larger sense, the values the Horgan government holds on pandemic response were better reflected by the Liberals than the Conservatives.

Now that the election is over, it will be interesting to see whether the Horgan and Trudeau relationship — sometimes called a bromance — survives in its current state.

Horgan was quietly on September 16 named chairman of the Council of the Federation, which is the group that represents all of Canada’s premiers in their relationship with the federal government. He’ll be going hard on Trudeau on behalf of other provinces for increased health care funding in the months ahead.

It’s good to have friends in high places, and BC’s premier has exactly that in the new parliament.