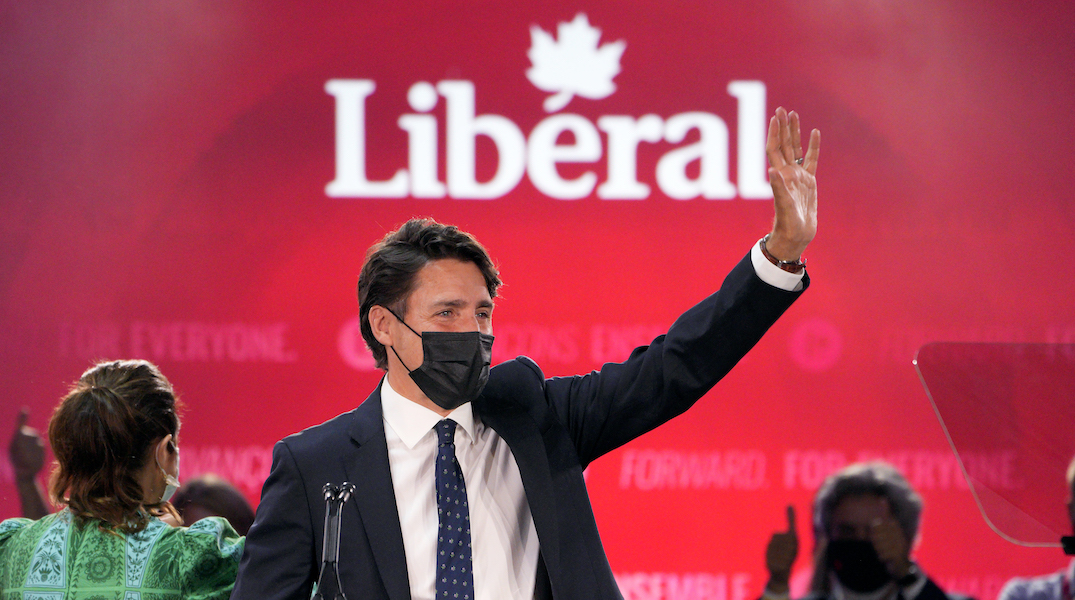 Prime Minister Justin Trudeau is returning to Ottawa without the majority government mandate Liberals had hoped for when he called the early election last month.

While the final results in some ridings might not be known for days, the Liberals led in 158 ridings early Tuesday and were in position to form the next government. The party held 155 seats when Trudeau called the election in August.

The Conservatives were poised to win the popular vote, with Elections Canada reporting that more than 5.4 million of the nearly 16 million counted ballots had been cast for the Tories, compared to 5.1 million for the Liberals.

They nonetheless placed a distant second in the seat count and will remain the official Opposition as the party led in 119 ridings. The Tories had 116 seats at dissolution.

The Bloc Quebecois and NDP will bring up the rear, each individually potentially holding the balance of power in the minority House of Commons, both also within a few seats of their 2019 tallies.

Elections Canada will start counting more than 780,000 mailed-in ballots Tuesday, and it expects most to be finished by Wednesday, but officials did warn some ridings could take up to four days for final counts.

Fresh off what many Liberals will no doubt consider a disappointing result, Trudeau made his traditional postelection day appearance at a Montreal metro station on Tuesday morning to greet voters during their morning commute.

Trudeau spent about 30 minutes at the station where some commuters congratulated him while others posed for selfies or asked him questions.

One excited woman waving a Canadian flag and a cross necklace threw her arms around the prime minister before his security personnel could pry her free. Another woman said she’d arrived from Afghanistan.

Hours earlier, after it was clear the Liberals would again form a minority government after falling short of their majority aims, Trudeau had attempted a conciliatory tone in his acceptance speech.

The Liberal leader and prime minister promised Canadians that he knows all they want is to finally get back to normal after the pandemic. He says the government they elected will do just that.

Ontario Premier Doug Ford offered his congratulations to Trudeau on Tuesday morning and called for unity, promising to work with the newly elected Liberal government to advance his province’s interests during the COVID-19 pandemic.

“For many, this has been an extremely difficult and divisive election and I would like to take this opportunity to urge unity. Emotions have run high as candidates from all parties debated pandemic policies, including vaccine certificates,” Ford said in a statement.

“I want to be clear: COVID-19 doesn’t care about partisanship or politics and I will continue to work closely with the Prime Minister. People elected our government to work in the best interests of Ontario, not in service of one political party over others.”

“I congratulate (Justin Trudeau) for his victory,” Legault wrote in French on Twitter. “I will work with him to advance the interests of Quebec.”

O’Toole spent election night in Oshawa, Ontario, and was scheduled to return to Ottawa for a mid-afternoon news conference.

The Conservative leader said Tuesday night that during his concession phone call, he warned Trudeau off calling another early election to make a grab for a majority government.

“I told him if he thinks he can threaten Canadians with another election in 18 months the Conservative party will be ready,” O’Toole said at his election night event in Oshawa, Ont.

NDP Leader Jagmeet Singh, who two years ago was chided for dancing and celebrating at an election night party despite losing 20 seats, delivered a very short, more subdued speech from Vancouver, even though this time his party did make some gains.

Most election parties were smaller and quieter than usual, with pandemic restrictions keeping crowd sizes to a minimum.

The People’s Party of Canada more than doubled its share of the popular vote and might have played spoiler to the Conservatives in some ridings by drawing away right-of-centre voters, but failed to elect a single MP.

The Green Party’s pre-election turmoil left it with less than half the vote share it achieved in 2019, following a campaign where Leader Annamie Paul finished fourth in her own riding and was asked not to visit many others by her own candidates.

No leaders stepped down Monday, but the future is murky for many, including Trudeau, who failed to secure a majority mandate after triggering the early election.

O’Toole was clearly sending the message in his speech that he has no intention of stepping down.