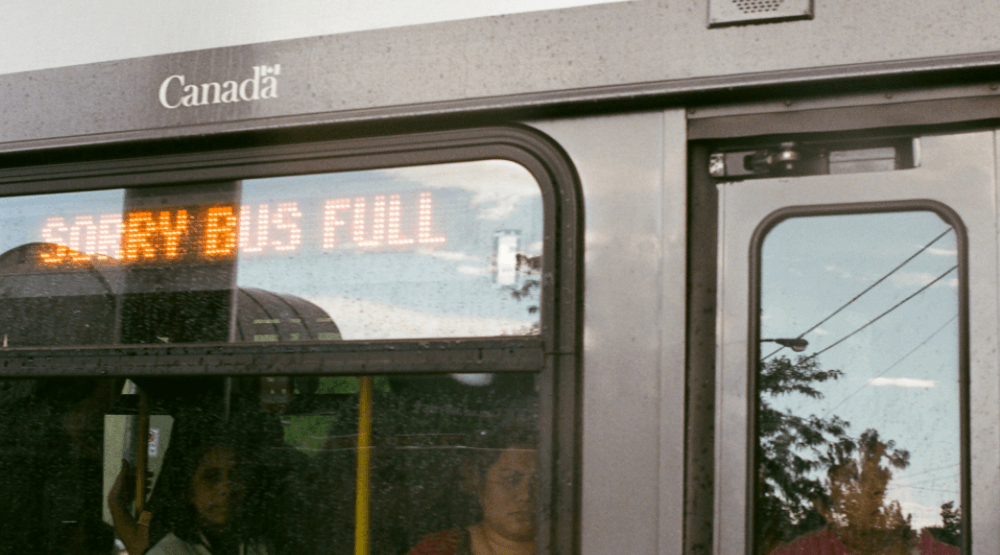 Sorry, bus full - or is it? (Roland Tanglao/Flickr)

So goes the soundtrack to my morning commute.

A time when the air is filled with the repetitive sound of the polite automated lady aboard Vancouver’s transit as she robotically attempts to usher unwilling passengers further into the bowels of the bus.

But despite her pleas, people remain rooted to the spot.

Eventually the poor driver snaps and takes it upon themselves to encourage people to shuffle a few feet from their position.

Most people ignore them however. Either unable to comprehend such a complicated instruction or unwilling to take their attention away from the book/cellphone/billboard they’re intently staring at.

It’s a ridiculous charade, one that happens every single day, but one that could be so easily avoided if people, y’know, actually moved to the rear of the bus.

So why the hell don’t they?

Look I get it, none of us actually want to be on the bus in the first place. There’s simply no way that anyone would actively choose to be wedged face first into someone’s armpit as we’re crammed like sardines into a slow-moving tin can.

But the only way we’re actually going to get through the all-too-uncomfortable journey is if we work together.

And that means taking up every available bit of space on the bus and not congregating around the doorway.

I mean it’s not hard is it?

You must know the bus is going to make other stops, and other people will be getting on at those stops. After all, it’s pretty much fundamental to the whole concept of bus travel in general.

So why would you set up shop by the driver’s seat or doorway, instead of shuffling a few extra feet along the aisle to fill up room at the back?

In case you don’t know, here’s how the tried-and-tested function of public transport works:

You enter through the front door. (Why not say “hello” to the driver who’s ferrying you safely to your destination while you’re at it?), make your way to the furthest point of space on the bus, wait for your stop, then exit through the back door preferably yelling, “thank you!” to the aforementioned driver as you do so.

That way, people who are getting on at other stops can enter easily and the driver can get underway on time, making the journey as fast and efficient as possible for as many passengers as possible.

It’s a simple practice of spatial awareness that you might think would be a prerequisite of riding public transport.

And yet every day people selfishly ignore it. They plonk themselves in the middle of the bus, seemingly too lazy or too selfish to move in order to let other people on.

So instead, they either have to run the gauntlet of statuesque passengers in order to do what they should have done in the first place. Or they’re forced to squeeze into an unnecessarily cramped space, clinging on for dear life as there’s not even enough room to lift up your arm and grab on to the safety rail any more.

We should also spare a thought for those people waiting to get on at the next stop. The would-be passengers who are told their ride is full and they’ll have to wait for the next one, only to see a cavernous space at the back of a half-full bus as it pulls away.

I mean what do you think is going to happen if you move a few feet back? There’s still somewhere to stand, you’re still conveniently located close to an exit, you still get to your destination at the exact same time as you would do if you were stood further forward. What do you think you’d be missing back there?

It’s like people think their fare gives them licence to do whatever they want, to treat the bus like their own personal limousine.

Instead, it’s a communal form of transport that would be better for everyone involved if we just shelved our selfishness for a few minutes.

So next time the automated lady asks you to “Please move to the rear of the bus” just do it. Otherwise you run the risk of joining the rogues gallery of despicable transit passengers.

Oh, and whilst we’re at it, if you could also stop putting your feet on the seats, playing music loudly, and annexing empty window seats by sitting on the aisle side, that would be great!