Ontario’s government confirms there have been 51 more COVID-19 related deaths, the biggest single-day jump so far, with 494 new known cases, as of Wednesday morning.

Compared to Tuesday’s 483 confirmed new cases, there is an slight increase in the newly confirmed coronavirus patients.

So far, a total of 385 people have died from coronavirus with 4,429 cases currently under investigation.

There have been 98 outbreaks reported in long-term care homes, an increase of five from Tuesday’s report.

According to Toronto health officials on April 14, in Toronto alone, there are 69 deaths and 52 outbreaks at long-term care and retirement homes.

The Greater Toronto Area public health units account for more than half of the cases at 55%. 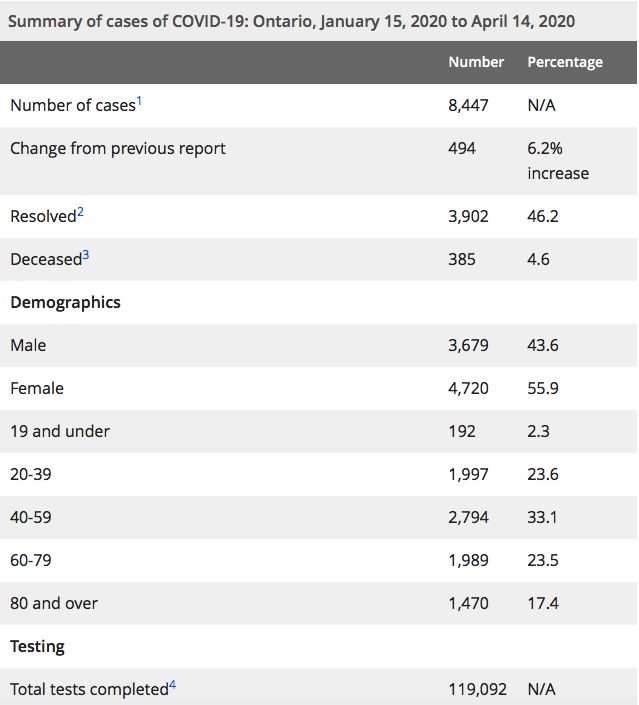 On Monday, health officials said that there is a chance Ontario’s coronavirus peak will happen this week.

While the province has almost 8,000 confirmed cases of the coronavirus, the number of new cases is declining “slowly.”

And according to Dr. Barbara Yaffe, Ontario’s associate chief medical officer of health, assuming all public health measures continue, the peak is likely to happen soon.

“Our numbers, generally speaking, the number of new cases each day has been going down slightly. Not exactly but the general trend,” said Yaffe on Monday. “The modellers have told us that the peak is likely going to happen this week.”

Dr. Yaffe said that after a peak, there will still be cases, but they will go down.

“That’s assuming all the measures in place continue, all the public health measures continue. If they are in fact correct, and things continue, after a peak, usually things go down,” she said.

According to the province, the daily summary is based on data reported by the 34 public health units across Ontario and recorded in the province’s integrated Public Health Information System (iPHIS).