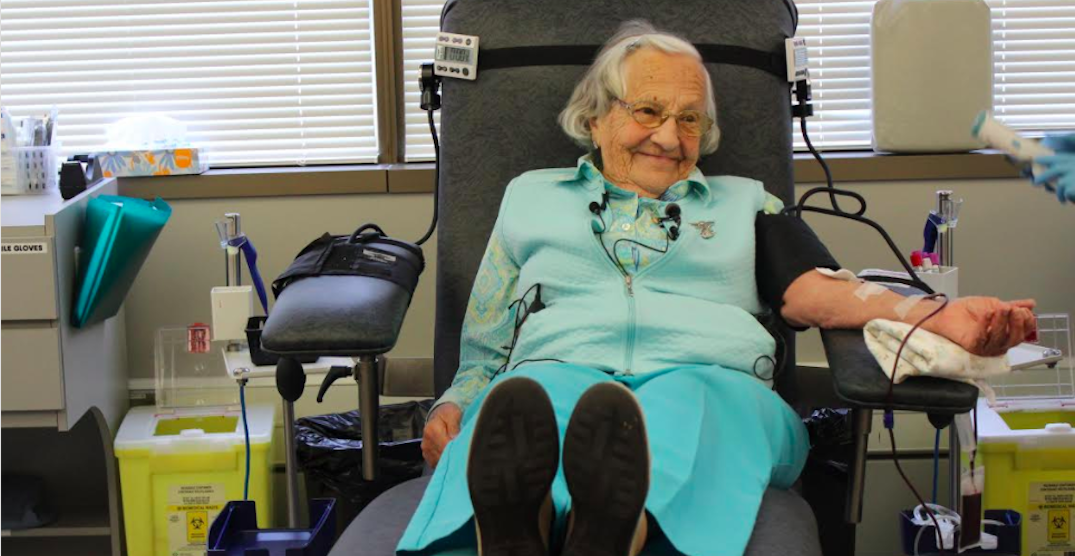 She’s been helping save lives for more than seven decades, and now, at age 95, Beatrice Janyk is Canada’s oldest blood donor.

The Coquitlam resident first started donating to Canadian Blood Services in the 1940s, and has regularly doing so, ever since.

“I started donating blood to help folks in need and save lives,” said Janyk.

Born in the small, northern Alberta village of  St. Vincent, Janyk is the last surviving sibling of her two brothers and four sisters.

She was married in 1942 to Bill Janyk and together they had three sons: Bill, Bob, and Barry.

Although she’s never received blood herself, Janyk has been an advocate for blood donation since 1947, when she lived in Honeymoon Bay and her husband Bill received blood after a serious sawmill accident.

After having given blood many times, she encountered an age restriction on donors when she was in her 70s and started going to the BloodWorks offices in Bellingham, Washington to donate.

Years later, she received a pin to commemorate donating 20 gallons of blood, the American equivalent of about 170 donations in Canada.

After Canadian Blood Services assumed oversight of the national blood system and revised the eligibility criteria for upper age donors, Janyk once again began donating blood in Canada in January 2005.

Since then she has donated more than 30 times.

For the last six years, Beatrice has lived independently in a suite at the Lions Club L. J. Christmas Manor, a non-profit senior citizens high rise complex in Coquitlam.

And even though she gave up driving at the age of 92, Janyk has a family friend drive her to the mobile blood donor collection site in Coquitlam.

This week, Janyk once again gave blood at Canadian Blood Services’ clinic at 4750 Oak Street in Vancouver, where a special presentation in the clinic recognized her unique status in Canada.

“Canada’s aging population makes it critical that we continue to recruit and retain a broader pool of younger donors,” he added. “A blood donation is as life-giving at age 95 as it is at age 17.”