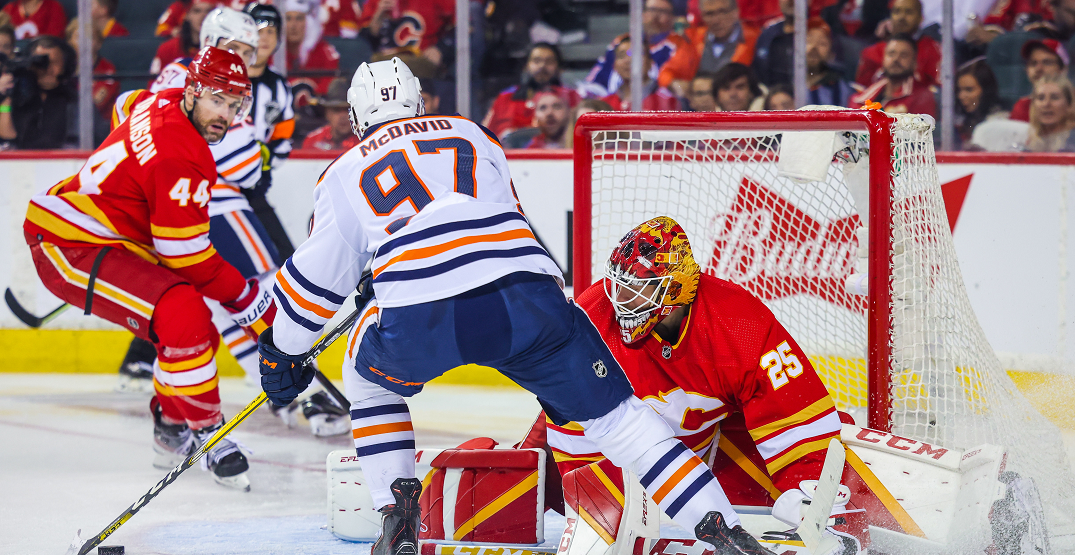 Not much has been able to get past Calgary Flames goalie Jacob Markstrom this season.

Except, apparently, the Edmonton Oilers.

He was named a Vezina Trophy finalist for the first time in his career this season, and has been one of the league’s most consistent goalies since establishing himself as the Vancouver Canucks’ starter way back in 2017-18.

But for whatever reason, he’s seemingly lost all his powers whenever he plays against the Edmonton Oilers this year.

Markstrom’s given up four or more goals in five of six Battle of Alberta meetings this season, including the regular season and the playoffs.

In two playoff games against the Oilers, he’s given up 11 goals on 68 shots, putting up a save percentage of just .838. Any way you slice it, it doesn’t look pretty.

Considering he’s only given up four or more 15 times all season, it’s wild to think that 33% of his worst games this year have come against the Oilers.

Per Sportsnet, Markstrom has an .868 save percentage against the Oilers, compared to a .927 when the Flames are playing anyone else.

But — unsurprisingly — his coaching staff is backing for him to reverse those numbers over the course of the series.

“I think we missed a lot of opportunities tonight,” Flames coach Darryl Sutter said. “I think Markstrom was really really good for us. I think that their individual skill stood out tonight in the situations that they scored on.”

And — you’re not going to believe this one either — his teammates believe they’ve got to play better in front of him.

“We’re kind of leaving our foundation a bit and playing into their hands,” Flames defender Noah Hanifin said. “When you’re playing those 4 on 4’s and you’re short a lot it’s tough. We’ve got to clean that up for sure. Marky made some huge saves for us and kept us in it.”

Maybe it’s a small sample size, and it’ll be a non-talking point by the end of the series. Or maybe Edmonton’s players really have unlocked the secret to beating Markstrom that 30 other teams have mostly struggled to find.

Whatever the case, Game 3 for the Oilers and Flames goes tomorrow night at Edmonton’s Rogers Place Arena. Barring any major surprises, Markstrom should get a shot at reversing his ugly fortunes against the Oilers.