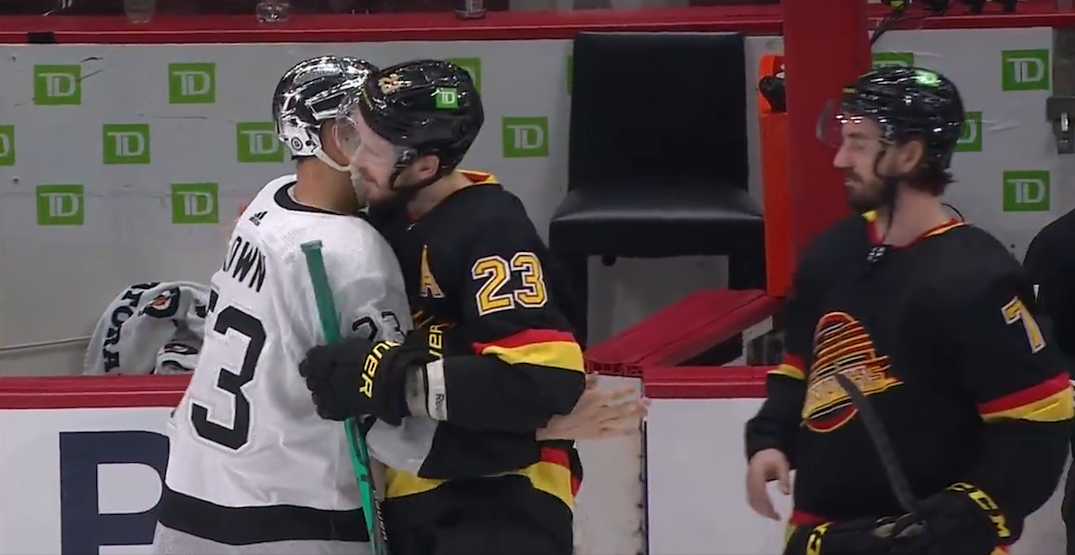 What in the name of Sir Falls A Lot were the Canucks doing for Dustin Brown last night?

I get that there are no manuals for honouring visiting players, and I’m big on sportsmanship, saluting the other side when they do well, and recognizing excellence.

We’re all hockey fans, it’s the spirit of the game.

But Dustin Brown’s team is playing playoff games next week — that was only his last regular-season NHL game.

Classy response from #Canucks fans for Dustin Brown, who is retiring at the end of this season pic.twitter.com/PDh82ShAts

Lots of love for Dustin Brown after his final regular season game. 🥺 pic.twitter.com/kcd0vH1zOQ

The video board tribute was enough, but Canucks players waiting? An on-ice queue and handshakes for one of their former antagonists?

Do we not remember how many times Brown accidentally/on-purpose fell on a Canucks goaltender?

And while I appreciate that nearly 1,300 games and two Cups is worthy of acknowledgement, this isn’t Anze Kopitar or Drew Doughty we are talking about.

He isn’t a Hall of Famer, he isn’t even Ryan Getzlaf.

He announces his retirement in Vancouver as opposed to LA? And somehow Rogers Arena is supposed to act like it’s a Kings home game on Fan Appreciation Night?

Dustin freaking Brown gets two receiving lines? Poses for pictures on-ice, carries on like he’s riding into the sunset when we all know he’d fall off the horse and onto a Canucks star.

The only thing I can think of that explains that scene is that the Kings went to the Canucks and told them they have no plans to use Brown in the playoffs and that last night would, in fact, be his final game period.

Anyways, wish Brown well, splendid career, and now when I think of him, I’ll think of the oddest scene at Rogers Arena since Mike Ricci posed for photos with the Queen.