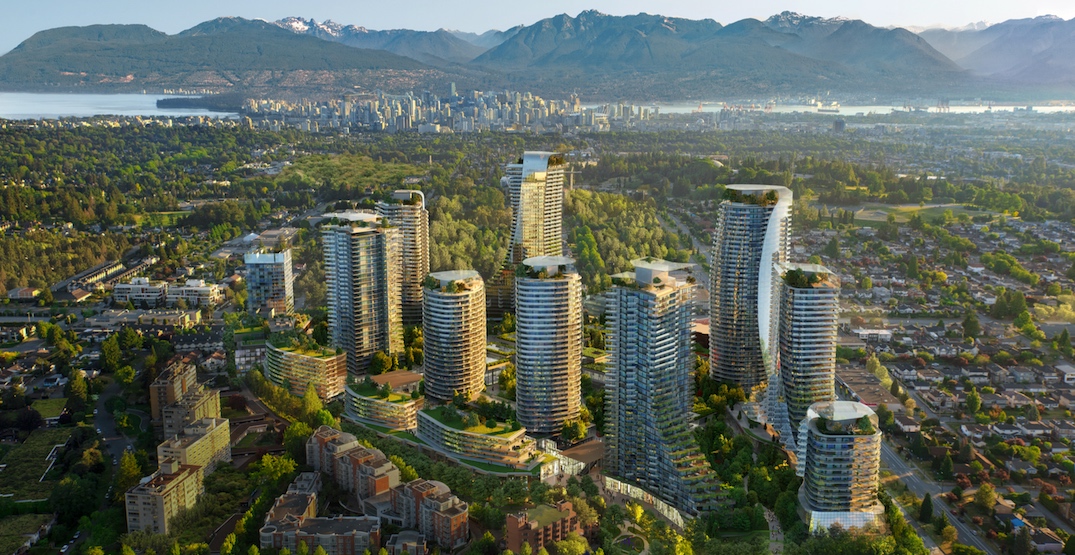 Construction on the redevelopment is well underway, but the changes largely deal with the residential and office buildings, which are mainly part of the latter stages of the project.

Property owner Quadreal Property Group and developer Westbank will now be able to build 5.05 million sq ft of total floor area, representing an increase of 425,000 sq ft over the previous rezoning. This increases the overall density of the 28-acre project from a floor area ratio of 3.71 times larger than the size of the lot to 4.1.

Office space, mainly located within the lower levels of tower and podium buildings, will double from 424,260 sq ft to 810,436 sq ft. The additional office space is achieved by both height increases and reducing the retail floor area by 178,600 sq ft to 1.2 million sq ft, which still represents a doubling of the size of the previous, now-demolished mall.

The redevelopment entails 15 buildings of varying heights. The approved changes increase the heights of nine buildings, with the most significant height change made to Building 5 fronting Cambie Street. This tower has been converted from condominium uses to 100% rental housing, and its height has been increased from 43 storeys to 52 storeys. 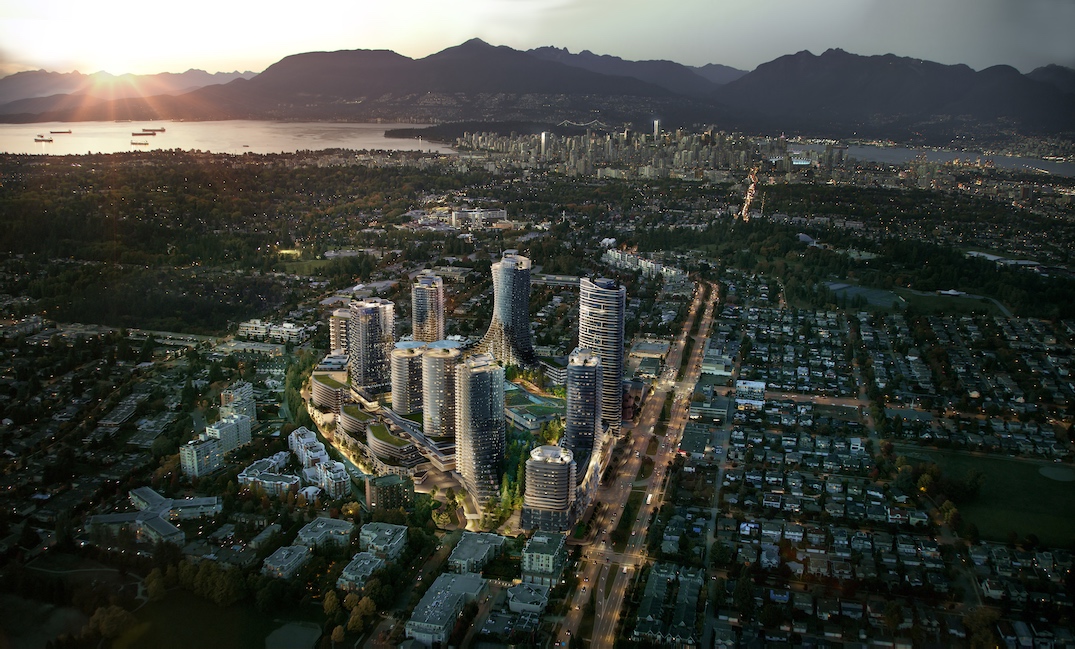 Overall residential floor area in the complex has been added through both increased height and changes to the massing shape of some of the towers for slightly larger floor plates.

As a result of the residential floor area changes, Oakridge Park will see a net increase of 409 homes, growing to a total of 3,323 units of various housing tenures. This includes increasing secured market rental homes from 290 to 573 units, including 130 affordable rental homes for moderate-income households. The net increase in rental homes specifically is 413 units.

The condominium floor area will also decrease by 151,000 sq ft to increase the proportion of rental housing. 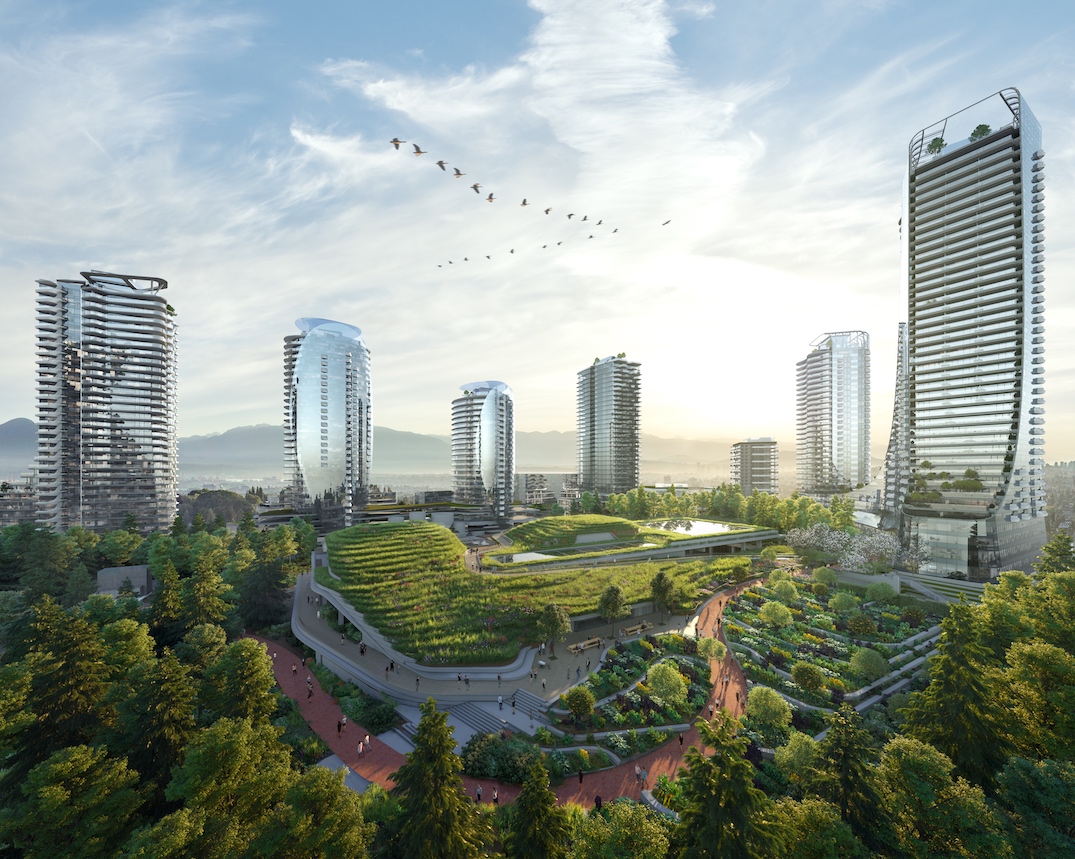 In her closing comments during the deliberations, COPE city councillor Jean Swanson said the amendments to the approved zoning were “a hard decision” for her, but she ultimately voted in favour.

She added that she would like to see a higher proportion of affordable homes in the housing mix, noting that 87% of the total number of homes are for households with incomes of over $80,000 annually.

“It is not socially diverse and inclusive community, it is an exclusive enclave for wealthy people,” emphasizing that most of the available units for rent will be unaffordable for lower incomes, and the asking condominium prices range between $2,000 and $2,500 per sq ft for a one-bedroom unit.

“This is about the social and more affordable housing in the development, but at the same time it all hinges on a pro forma.” 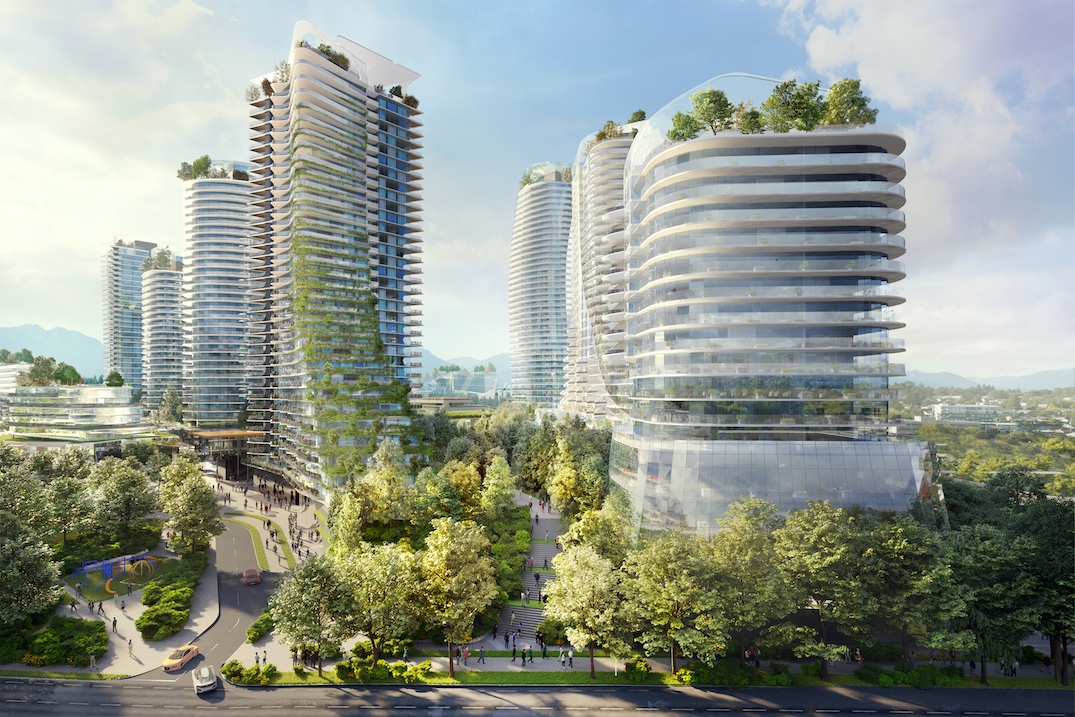 Green Party City Councillor Adrianne Carr said the amendment enables deeper affordability, but urged city staff to pursue more affordability in other projects being considered, and should more amendments be brought forward on revising Oakridge Park in the future. Carr also commended the larger unit sizes for the social housing component, with 50% of the units now containing two or three bedrooms to better meet the needs of families.

Pete Fry, another Green Party city councillor, also called the amendments an overall improvement but lamented the 2014 rezoning decision by a previous city council that required significant vehicle parking for the transit-oriented project, given that it is directly served by both SkyTrain Oakridge-41st Avenue Station and the R4 RapidBus.

Underground levels of the redevelopment could contain up to 5,600 vehicle parking stalls, including 2,660 stalls for residents, and 2,900 stalls for the mall, office space, and community centre. Some of this parking supply could be achieved by a tandem parking layout configuration, which will be operated with valet service.

City policies require a total of 4,800 vehicle parking stalls uses for all uses, which opens up the potential for some of the surplus stalls beyond requirements to be repurposed as bike rooms. The project could have a secure bike parkade facility with a capacity for over 4,000 bicycles.

As part of the redevelopment, a new secondary entrance will be built for Oakridge-41st Avenue Station. An underground mall corridor, lined with retail, will lead directly to the station’s ticketing concourse to improve the accessibility and capacity of the station.

In exchange for the added density, the development will provide $1 million in cash community amenity contributions (CACs) towards a new childcare facility, $10.6 million in development cost levies (DCLs), and $853,000 in public art. 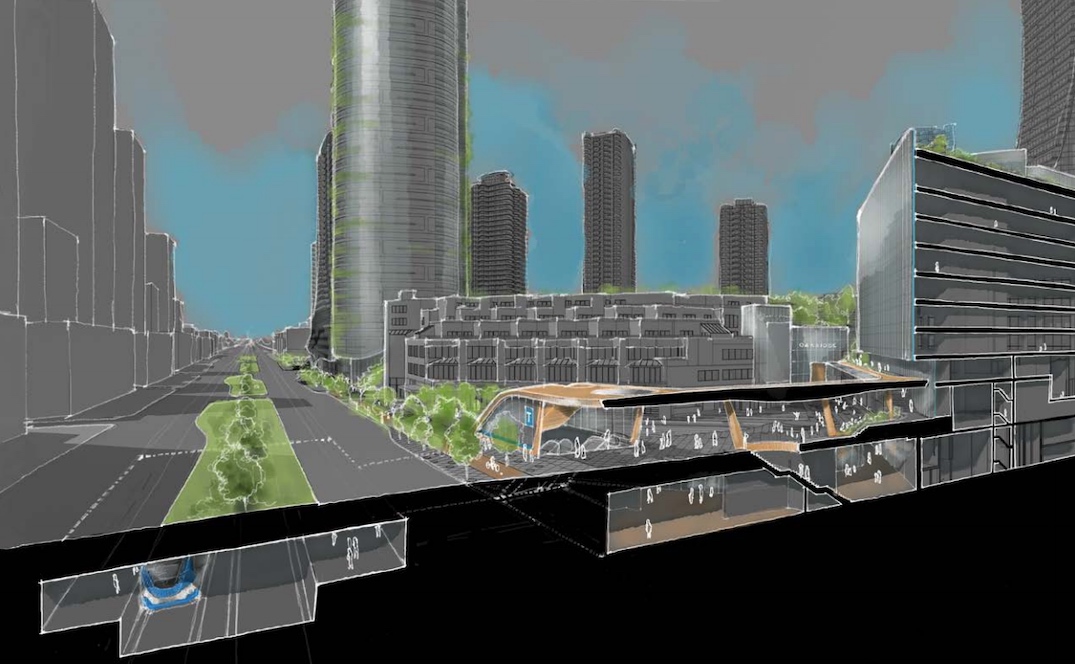 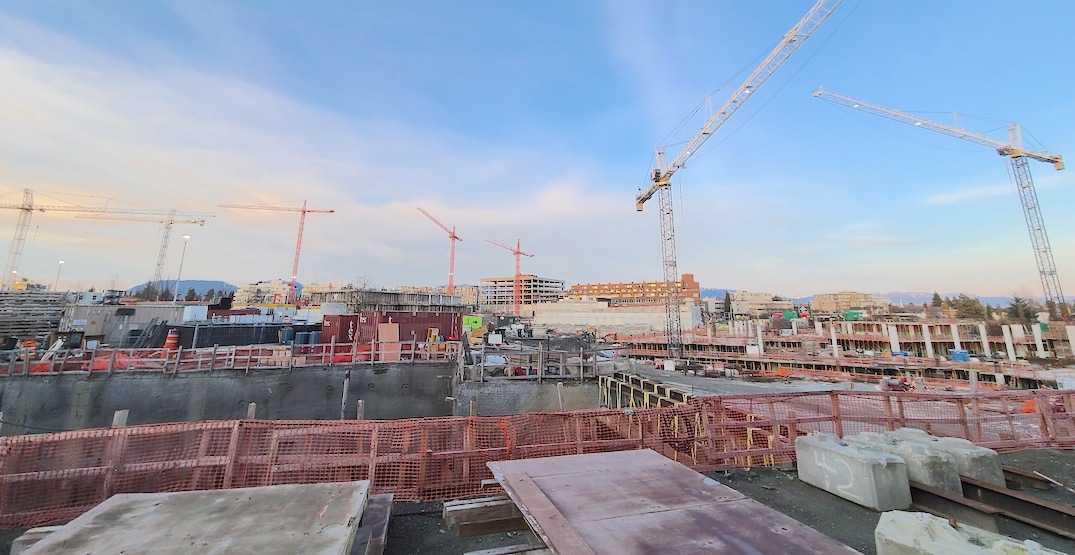 Major construction work on the redevelopment began in 2019, and in Summer 2020, a decision was made by Quadreal to significantly expedite much of the redevelopment’s completion, necessitating the full closure of the mall.

The current phase of work being built includes almost all of the new mall and the 100,000-sq-ft, two-storey food hall, the community centre, Vancouver Public Library branch, the first tower of social housing, four market residential towers, the transit plaza, the north office tower, and most of the nine-acre rooftop public park, which will be owned by the Vancouver Park Board.

The rooftop park, new mall and food hall within the core, as well as the new community centre, Vancouver Public Library branch, and social housing at the northwest corner are on target to substantially open by late 2024. The residential towers, stretching over multiple phases, will be completed between 2024 and 2027.

Henriquez Partners Architects is the project’s design firm, while EllisDon is the construction contractor.

Oakridge Park has undergone numerous design revisions since the redevelopment was first conceptualized in the 2000s, with the latest changes adapting to market conditions, and the need for more affordable housing. 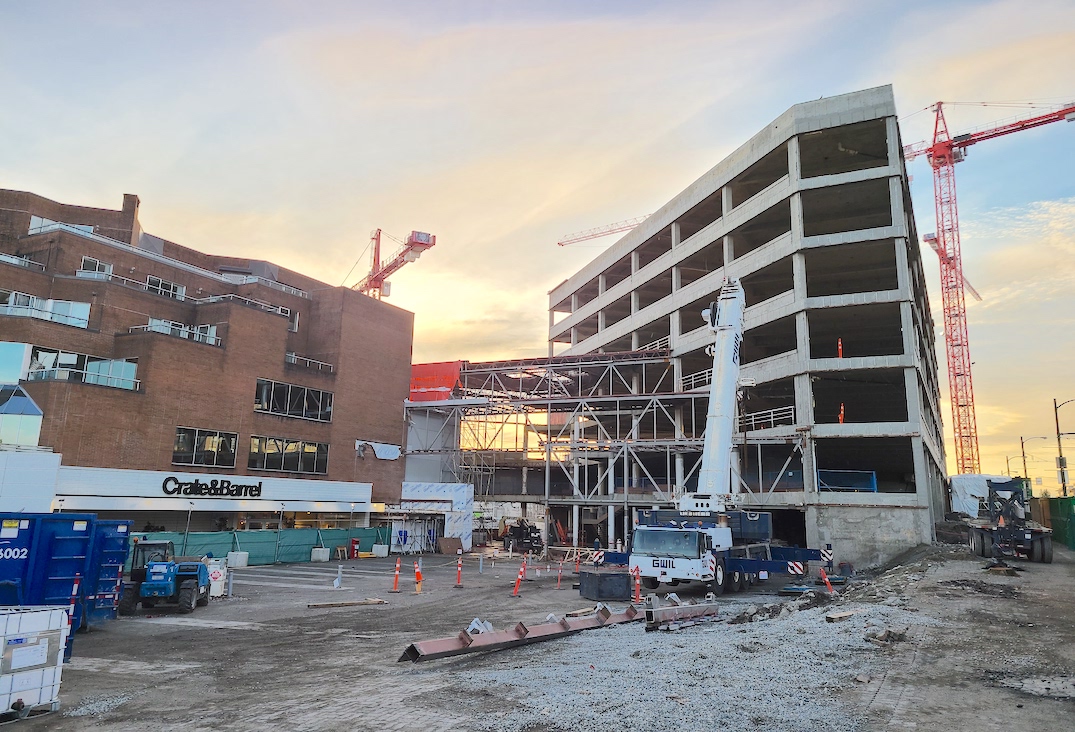