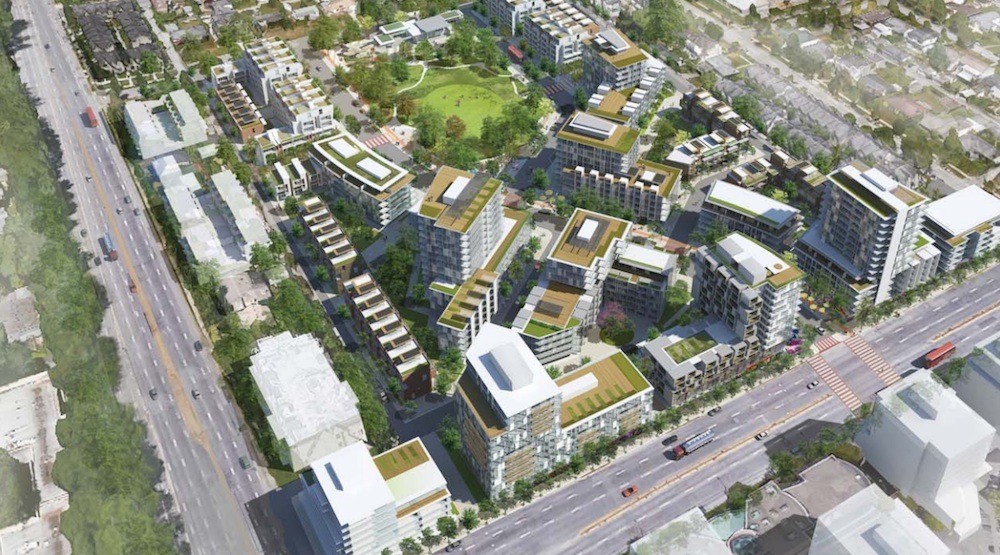 The redevelopment of TransLink’s old Vancouver bus depot near the northeast corner of the intersection of West 41st Avenue and Oak Street has advanced to the rezoning application stage.

There are few major deviations in the recently-submitted application to redevelop the 14-acre property, located at 949 West 41st Avenue, as it largely aligns with city council’s 2015-approved policy statement for the site’s future redevelopment, allowing for 17 buildings.

But the proponents of the ‘Oak Green’ project, Modern Green Canada Development, are seeking for two taller towers — 22 storeys and 23 storeys, reaching up to 230 ft — after precedent was set with similar tower heights for the approved tower redevelopment of the Jewish Community Centre (JCC) of Greater Vancouver across the street.

Under the policy statement, 15 storeys were established as the previous height limitations for the redevelopment. However, with the proposed changes, one of the tallest towers will be entirely comprised of moderate-income rental housing, while the other will be designated as market condominiums. This aligns with the city’s July 2018 policy of requiring large residential developments to allocate at least 10% of their units as moderate-income rental housing.

Another change is the acquisition and addition of three single-family properties to the project site, located at 39th Avenue and Willow Street.

“The Oak Green masterplan proposes a diversity of building form and massing to enhance the backdrop of the North Shore Mountains while respecting the surrounding context of predominantly single-family houses and townhomes,” reads the design rationale by James Cheng Architects.

“With particular attention to providing natural sunlight throughout the site, the overall building massing gradually steps down as one moves north through the site, with high-rises on 41st Avenue stepping down to mid-rise and low-rise buildings surrounding a two-acre park at the north end of the site.” 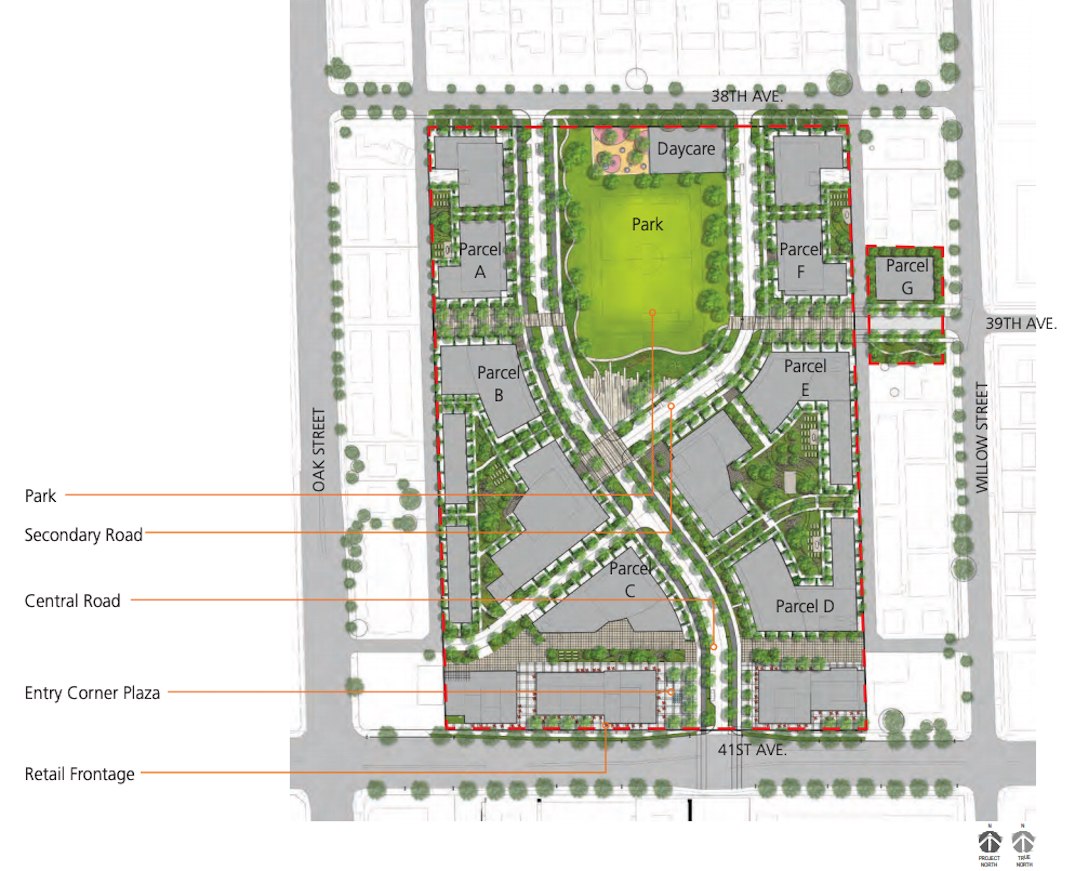 Community serving retail and restaurant spaces, totalling about 15,000 sq. ft. of commercial space, will be mainly located along West 41st Avenue and the new intersection across from the JCC.

The public street grid will be extended onto the site, including a new pedestrian greenway between West 41st Avenue and 38th Avenue, connecting to a new 2.3-acre central public park that features a sports field and a childcare facility for 69 children. 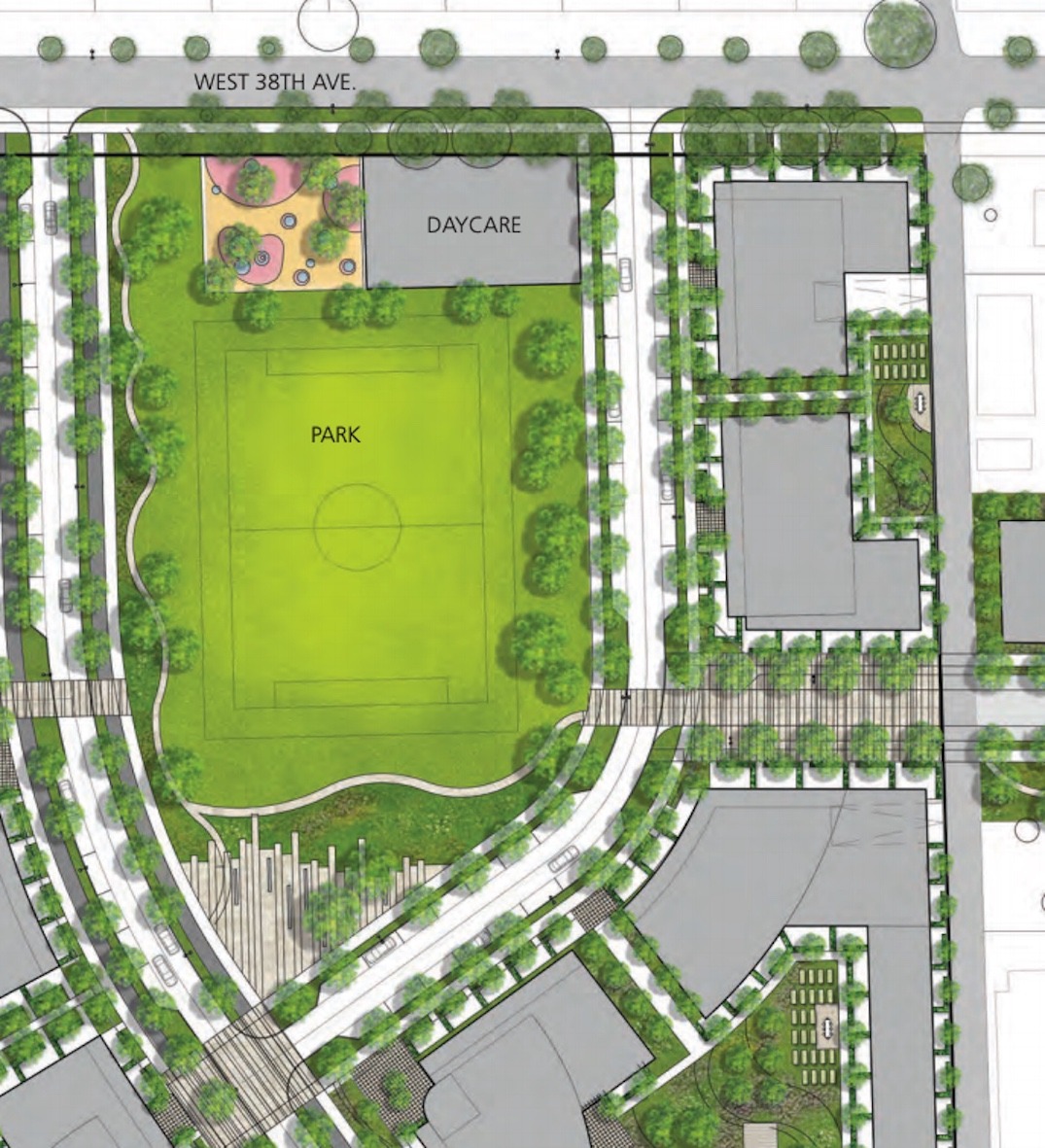 Other public spaces on the site include a new public plaza at the new West 41st Avenue intersection, and landscaped courtyards and open spaces.

Altogether, the redevelopment calls for 1,149 market residential units, 180 secured market rental units (including 45 moderate-income rental units), and 300 social housing units, with one of the two social housing buildings to be constructed in the first phase of the project.

At least 50% of the affordable housing units will be large enough for families with children, while a minimum of 35% of the market units will be two bedrooms and three bedrooms. 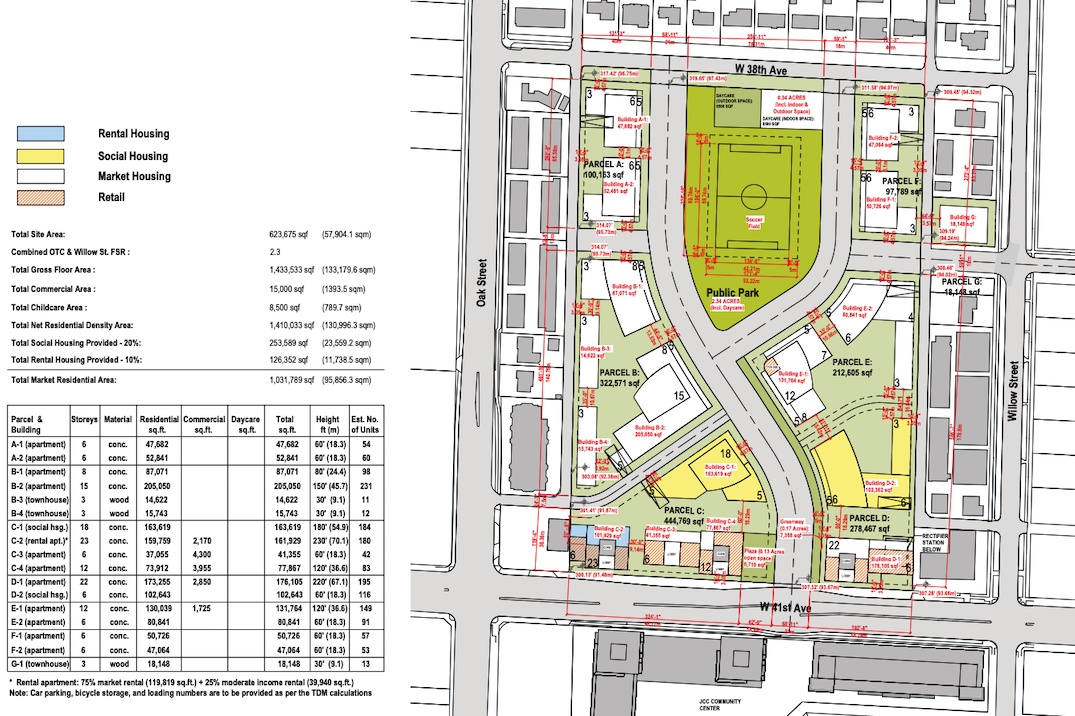 The proposal also calls for a high degree of green-oriented designs and sustainability focus.

After the opening of Vancouver Transit Centre near the north end of the Arthur Laing Bridge in 2006, the old bus depot was used by TransLink for mainly storage purposes until 2016, when it was sold to Modern Green for $440 million and storage uses were transferred to the new Hamilton Transit Centre in Richmond.

If all goes as planned, most of Oak Green will be constructed over  a number of phases between 2020 and 2031. 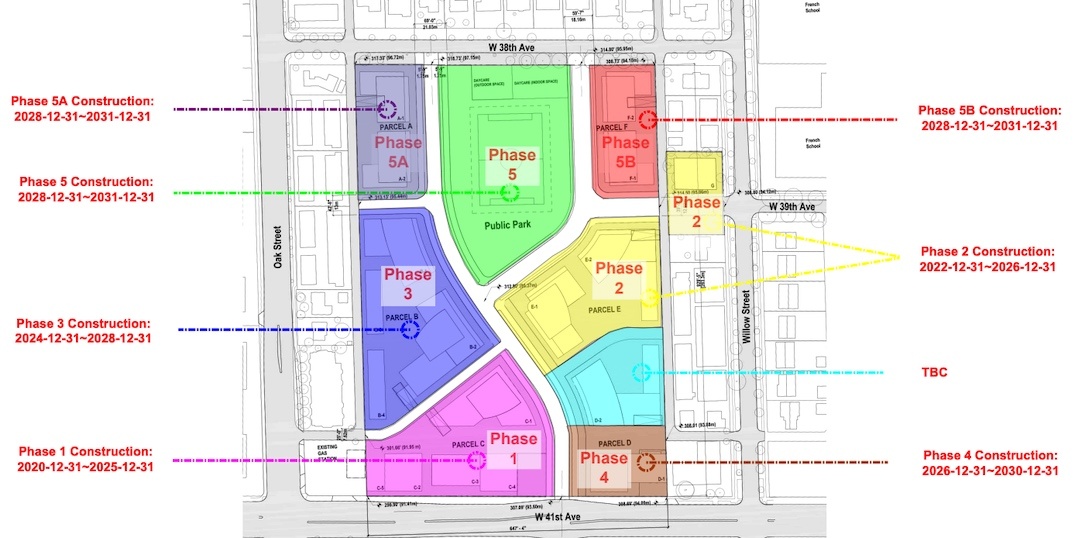