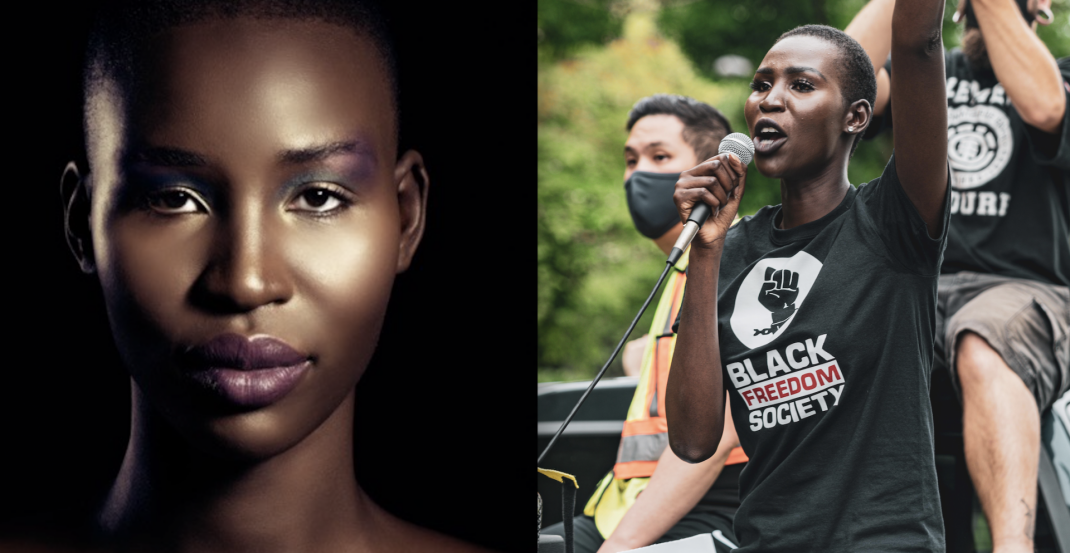 Nova Stevens will not be silenced.

The 27-year-old Vancouverite is the passionate activist and co-organizer behind the city’s Freedom marches, which saw thousands stand up against anti-Black racism and support the Black Lives Matter Movement this summer.

And while Stevens is used to bringing her voice to the forefront as a community organizer, she will be doing that differently tonight as she competes for the Miss Universe Canada title in Toronto.

Stevens says she will be using her stage at the competition as a way to amplify her message.

“I just couldn’t sit back and let everything continue as business as usual. Because I am no different than Breonna Taylor. These are Black women. These are Black men. People that I directly identify with.”

Stevens has been at forefront of activism in Vancouver — leading, organizing, and using her voice and platform to bring attention to racial injustice and systemic injustices that are not just exclusive to the US.

For Stevens “Black Lives Matter” is not a movement. “It’s a fight for basic human rights,” she says. “We are fighting for the right to live just like anyone else.”

While Stevens’ work as an advocate is one where she unapologetically uses her voice, the world of pageants is often seen as quite the opposite.

Miss Universe competitions evoke images of glittery ballgowns, swimsuits, hair extensions, and glamourous makeup. Contestants are often asked their thoughts about real-world issues during a competition’s question period, but they are limited in the amount of time they are given to use their voice to answer.

But Stevens is prepared to disrupt these norms.

“Pageantry is not always known for advocating or a political platform. I often wonder, ‘is that going to help me or is that going to lower my chances because I am advocating for Black Lives Matter and not everyone may agree with that message?’  But at the same time, I don’t care,” she said.

“The point is for you to listen and if I have to go on a bigger stage for you to listen then I’m going to do that. That’s what I want to do with Miss Universe Canada, use that platform … so I can reach a broader audience, so I can create awareness and educate more people because, at the end of the day, it’s about educating people.”

But education can only go so far. Stevens says that listening is necessary for effective and authentic allyship.

“It’s one thing to be there at marches. But it’s also another to put in the work,” she said.

“When you listen …are you then going to continue the conversation? Because mind you, we’re not invited in your homes. If somebody is speaking ill of Black people or against Black Lives Matter or inciting hate, are you standing up for those people? Or are you remaining silent because of what they might think because they are your friends or family?”

As an international model, Stevens also has first-hand experience with the beauty and fashion world and insight into if these industries are implementing meaningful change when it comes to diversity and inclusion.

“There’s a lot of tokenism in the industry,” she said. “I don’t know. Sometimes I have a hard time believing if that is the case if they are actually starting to appreciate our beauty or if they’re just doing that so they don’t come across as racist. We’re definitely not there … I don’t think we’re there at all.”

Stevens explains that she still comes across makeup and hair artists who don’t know how to work with her skin tone or hair.

“It boggles my mind because as an artist, you should be well versed in all skin types not just… lighter complexions because the world is so diverse and beauty does not only belong to people with lighter skin. I don’t really understand why society has this image of beauty, to begin with.”

It is Stevens’ third time competing in the Miss Universe Canada pageant and the process has also taught her about embracing her own beauty.

“For me, it was really important to compete with my natural hair. The first time that I did Miss Universe Canada I had a weave on,” she said.

“I had silky straight hair because, I guess, I was told growing up all my life, whether it was by family members or media, that this is what’s considered beautiful –you have long hair that’s straight or loose curls.”

The second time, she felt she was “losing herself” without her natural hair.

She hopes by standing on stage as her natural, authentic self, she will inspire others to do the same.

For Stevens, “there is no need to choose one group and tell everyone else that this is what is considered beautiful.”

“Based on whose eyes? Like whose in charge?” she asks.

“I think we need to take ownership of ourselves and not listen to what media is saying or what society is telling us. Be true to yourself and you find beauty in our own beauty in your own self and don’t let others dictate how you should live your life, how you should look, or how you should feel for that matter. Be who you are.”