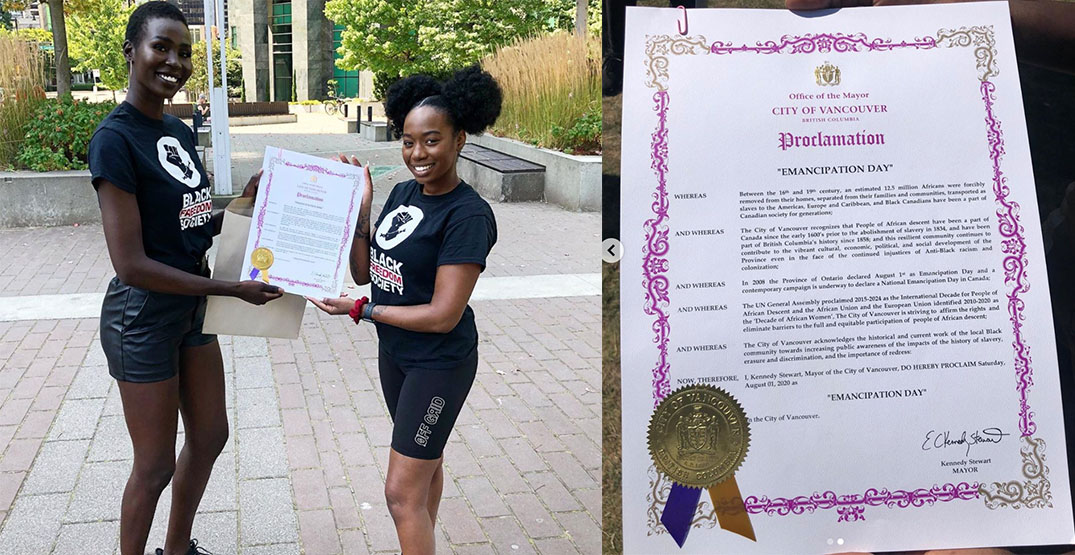 The day commemorates the abolishing of slavery across the British empire in 1834, when Canada was still a British colony.

“I feel overjoyed with happiness,” Stevens told Daily Hive. “To have this day proclaimed truly validates all the work we put into it.”

The proclamation follows countless calls, emails, and meetings between Mitchell, Stevens, and city staff. The pair also organized a massive Juneteenth march earlier this year, and they believe the response to that demonstration really fuelled desire to recognize Emancipation Day.

“It’s unfortunate that it took the killings of many innocent black girls, boys, men and women for the world to see that we are and have been suffering from a racial pandemic,” Stevens said. “Our Juneteenth march and protest really set the precedent. It was from there that we began talking with the mayor, council members, etc.”

“Our Juneteenth march and protest really set the precedent,” Stevens said, It was from there that we began talking with the mayor, council members etc.

“I’m feeling proud of Vancouver for these first steps and the urgency they used,” Mitchell said. “But we still have a long way to go.”

The official recognition comes on the same weekend that Stevens and Mitchell organized an Emancipation Day march in downtown Vancouver.

“The City of Vancouver acknowledges the historical and current work of the local Black community towards increasing public awareness of the impacts of the history of slavery, erasure and discrimination, and the importance of redress,” the paper signed by Mayor Kennedy Stewart reads.

Ontario is the only other Canadian jurisdiction to officially recognize Emancipation Day, which it did back in 2008. According to the Royal Commonwealth Society of Canada, Toronto’s Caribana festival has its roots marking the historic day.

Mitchell and Stevens are currently running an online fundraiser to continue doing their advocacy work, and are planning even bigger days to mark both Juneteenth and Emancipation Day next year.

“We want emancipation day to be about black culture. A day where we march, sing, dance, speak, create and express ourselves through different mediums while celebrating with our allies,” Stevens said.