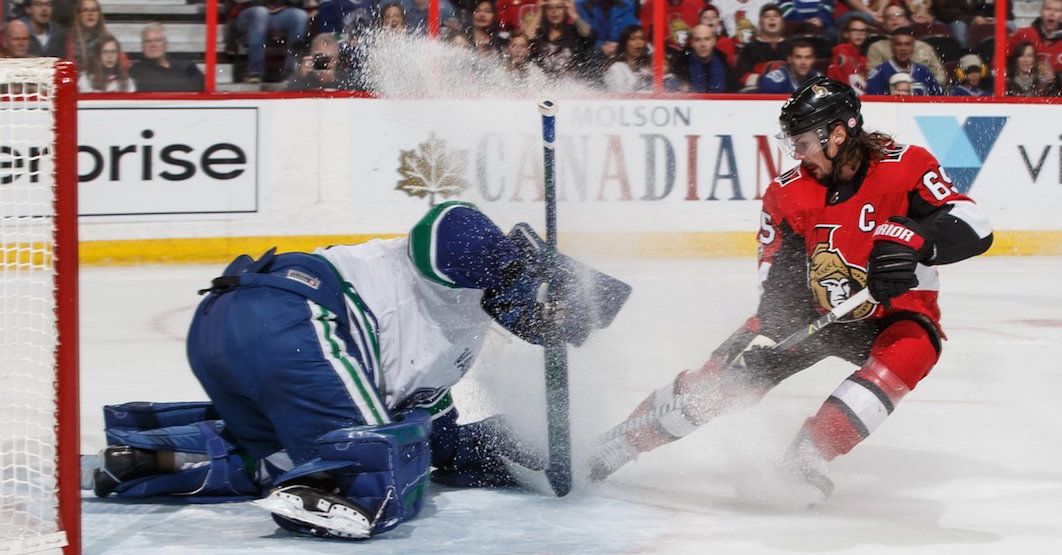 Well that was better than expected.

Anders Nilsson’s first start as a member of the Vancouver Canucks went about as good as it possibly could; no goals against in a 3-0 shutout win over the Ottawa Senators.

This is a Senators team that just finished wiping the floor with both Alberta teams, and beat the Canucks in their own building last week, AND they just got the best defenceman in the world back in their lineup.

The Canucks defended well, and Brock Boeser had another standout performance as the Canucks handed Ottawa their first regulation loss of the season.

As a goalie debuting with a new team, what could be better than a 3-0 shutout victory?

Maybe a 4-0 shutout victory, but the point is everything went right for the new Canucks goaltender Tuesday against the Senators.

Nilsson never had to make any stunning saves, but instead relied on sound positioning and good rebound control to get the shutout.

Being 6-foot-6 doesn’t hurt either.

Canucks defenders did a good job of keeping most of the Sens chances to the outside, and Nilsson did his part by using his big frame to his advantage.

I like how Nilsson’s able to keep his shoulders squared and covering the top of the net when moving side to side. A lot of the time shooters will try to place one-time shots up over the arm, an area Nilsson covers well.

Nilsson had 32 saves – including 17 in the first period – to record the shutout, and you have to wonder if Travis Green goes back to him when the Canucks take on the Bruins on Thursday.

Obviously an excellent game from Nilsson. #Canucks should play him and Markstrom based on merit. No clearcut No. 1.

With two points against the Sens on Tuesday, Brock Boeser now leads the Canucks in scoring.

That’s despite sitting out two of the five games the Canucks have played this season. I don’t think we’ll be seeing him back in the press box any more.

It’s still early, but Boeser is looking like the Calder trophy threat many pegged him to be coming into this season.

It’s a welcome addition for the team that scored the second fewest goals of any in the NHL last season. It’s still a small sample, but Boeser is proving he can produce at this level.

The rookie now has two goals and four points in three games this season.

After last game put the microscope on how awful the Canucks power play is (was?), Green switched things up, and it actually worked!

Well, that’s hard to say after one game, but they scored once on only two opportunities which is hard to argue against.

The unit was Boeser, Alex Burmistrov, Sven Baertschi, Michael Del Zotto, and Derrick Pouliot. The Sedins were on a second unit that saw only one shift, and Bo Horvat was off the power play altogether.

It’s an odd group of players Green chose in my opinion, but hey, they scored.

Who else would it be? Boeser finds the puck in front of a crowded net and fires it past Craig Anderson for the eventual game winner. Great job by Burmistrov too creating chaos in front.

I didn’t expect Burmistrov would be the SixPack Superstar this game, but I also didn’t expect a 3-0 win, so it’s a night full of surprises I guess.

Burmistrov got the bump up to the second line for this game with Boeser and Baertschi, and they were easily the best line for the Canucks.

They connected once as the team’s top PP unit in the first period, and scored again at even strength late in the second.

Burmistrov picked up an assist on Boeser’s goal, before deflecting one of his shots past Anderson for his first goal as a Canuck.

It was a great night for Burmistrov after being a healthy scratch two games ago. We’ll see if Green keeps him and Boeser together.

Loui Eriksson left last game early with an injury, and today we found out he’ll be out of the lineup for a while.

Coach Green confirms Eriksson will miss 4-to-6 weeks with a knee sprain.

While it’s never good to see a player injured, there are some silver linings to the timing of this injury.

In the first four games, Boeser sat twice, Burmistrov once, and Jake Virtanen once as well. That cycle would have continued, but Eriksson’s absence now forces all three young forwards to play regularly.

Boeser leads the team in points, Burmistrov is tied for second, and Virtanen is making an impact in very limited minutes.

With a new goalie comes new mask and pad designs, and I’m a big fan of Nilsson’s setup.

Everyone seems to agree his mask is nice, but some aren’t so fond of the dark blue pads.

Anders Nilsson has the grossest goalie pads ever #Canucks

Why does Nilsson's gear look like he opened up NHL and pressed apply team colours when making himself in Be A Pro? pic.twitter.com/4dLeKNWDW5

Any confusion was cleared up after this poll though. There is no debate – a whopping 91% say they like the pads.

Poll for the #SixPack tonight, do you like Anders Nilsson's goalie pads?#Canucks

For what it’s worth the SixPack godfather, Omar, is undecided on the pads but a big fan of the mask.

Dunno about pads, mask is starting goalie quality tho

Much like the Jim Carey movie, everybody loves the mask.

We might just see it again on Thursday, when the Canucks are in Boston taking on the still-very-much-hated Bruins. Should be a good one.