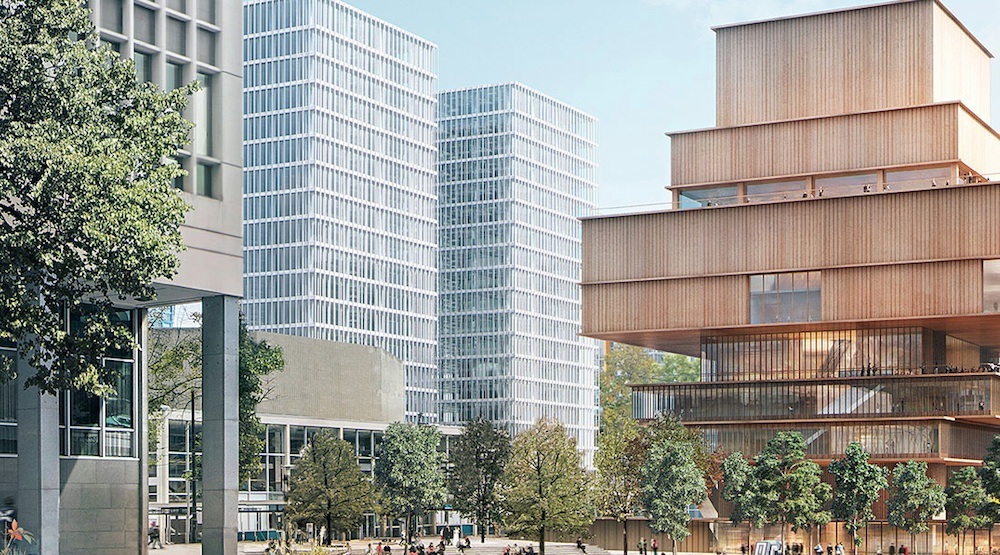 The City of Vancouver owns the 2.7-acre vacant parking lot site, and will be leasing a 0.89 acre lot on the Dunsmuir Street side of the block to another party for the purpose of constructing new office tower developments.

The remaining portion of the site towards West Georgia Street will be used by the VAG for its new $350-million, 311,000 ft² museum building.

Larwill Park will be subdivided into two lots: coloured in red for the new Vancouver Art Gallery, and coloured in blue for office towers.
(City of Vancouver)

Following the site’s anticipated rezoning, the towers can reach up to a height of 450 ft. However this zoning allowance will be snipped at just 246 ft due to City’s E1 view cone that ‘protects’ views of Grouse Mountain from the Cambie Street Bridge. The future VAG is slightly shorter at 230 ft.

The municipal government hopes to see 600,000 ft² of office and retail space built within this north parcel.

But there are some other stipulations. As part of the 99-year lease agreement, the successful proponent must set aside space for a parking ramp for the future VAG and demolish the 1932-built Canadian Pacific Railway tunnel underneath the site.

In 2008, then-Premier Gordon Campbell promised $50 million for the project.

Construction on the new VAG designed by Herzog & de Meuron, the internationally renowned architectural firm that designed the Bird’s Nest Olympic Stadium in Beijing, is scheduled to begin later this year.

Both the office tower development and the new VAG, along with the redevelopment of the Canada Post building and the proposed ‘green lamp’ office tower, will expand the Central Business District and its associated activity eastwards on the downtown Vancouver peninsula.