A male driver is being investigated after swerving off the road and colliding with a tree on the other side of the street.

The incident took place on Wednesday, August 22 on 21st Street and Lonsdale Avenue at approximately 3 pm. 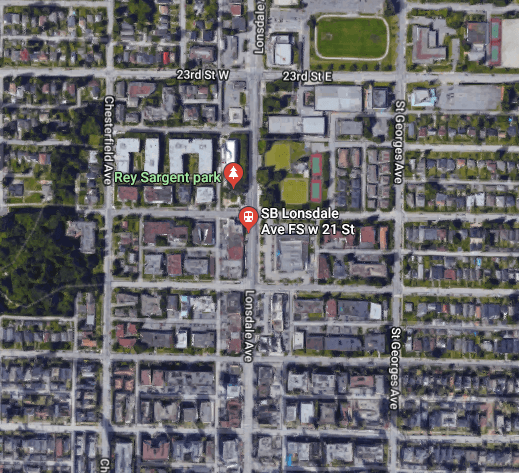 Lonsdale and 21st via Google Maps

According to a police report, the lone male driver was moving northbound on Lonsdale Avenue in a small white sedan.

The 27-year-old male suddenly veered off to the left, crossing two lanes of traffic moving in the opposite direction in the process.

Female at bus shelter on Lonsdale Ave & 2100 blk struck by vehicle which had drove off the road – hit a tree then the shelter. Female received non life threatening injury and taken to hospital. Emergency vehicles at scene. 2100 block of Lonsdale remains closed for investigation.

He struck a woman sitting in a bus shelter before ultimately crashing into a tree.

The 34-year-old woman was taken to the Lions Gate Hospital but fortunately only sustained minor injuries.

The tree and the car both received significant damage. No damage was done to the bus shelter or the surrounding retail locations on the block.

According to the RCMP, several witness statements were taken from individuals in the area. Shop owners and employees from the surrounding restaurants and businesses gave their accounts of the event.

Cpl. Richard De Jong, of the North Vancouver RCMP, explained that a cause of the crash is not yet known and it’s undetermined whether speed, drugs, or alcohol were factors in the incident.

Cause of accident on Lonsdale & 21 is under currently under investigation. Contributing factors unknown at this time.