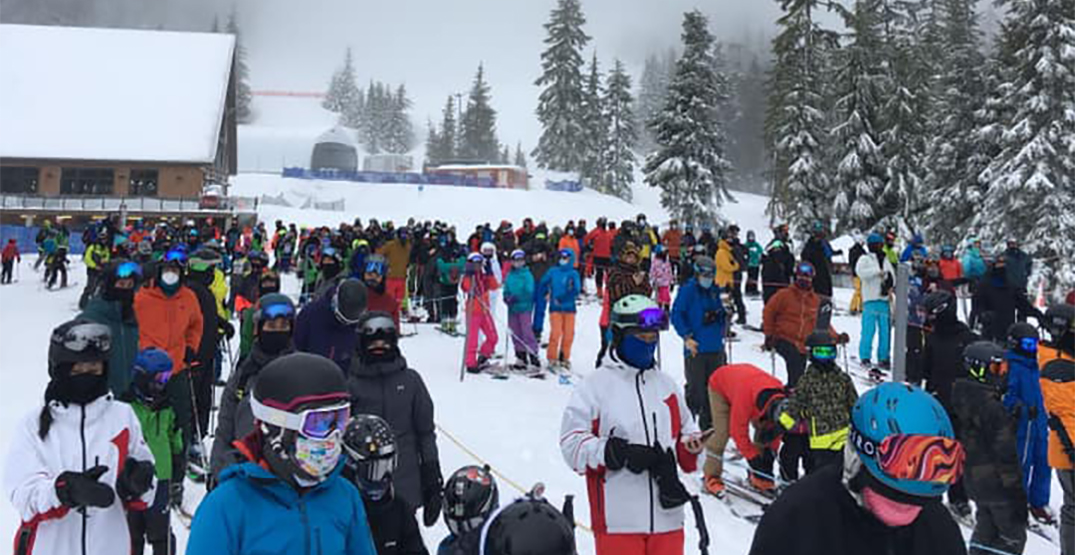 This photo was taken right before Cypress Mountain opened its main gate on March 7, 2021 (Benny Sadikin/Facebook)

Vancouver’s North Shore mountains are in the middle of a busy spring break as skiers and boarders hit the slopes during a year when the COVID-19 pandemic prevents travel further afield.

Pandemic-related distancing restrictions have made for ballooning lift lines at the three ski hills as Metro Vancouverites turn to one of the only activities deemed safe while indoor gatherings are prohibited.

Reservations for Grouse Mountain tend to fill up about a week in advance because capacity is restricted on the gondola to access the ski area. Spokesperson Julia Grant told Daily Hive Grouse is only welcoming about half the guests it usually does because of that.

“Our reservation system has been in place throughout the winter season to manage capacity at the mountain,” she said. “We are operating at less than 50% of our regular capacity … There is no change to that capacity over spring break.”

Cypress Mountain, the only North Shore mountain without a reservation system, says it’s been operating at about 70% of normal capacity this season.

Spokesperson Russell Chamberlain said that lines may appear long because people can’t upload with strangers, but there are similar numbers of people at the hill compared to previous years.

He said the mountain chose not to implement a reservation system because it uses RFID cards to monitor how many people visit the hill on any given day, and staff use that data along with the weather forecast to predict how many people are going to visit.

“Cypress Mountain season pass products have been designed to manage daily resort capacity. We have a strategic mix of pass products, which most are restricted to non-peak periods and only a small percentage of our passes are valid on weekends and holidays,” he said.

But despite Cypress’ best efforts, some snowboarders say the lineups this year have soured their experience.

Steffen Schmitz has had to wait 40 minutes in the lift line some nights, which is frustrating when it also can take half an hour to find a parking spot.

He questions why the mountain still sells day tickets when it’s packed with pass holders or why it doesn’t limit capacity with a reservation system.

“I just feel like they’ve taken advantage,” he told Daily Hive in a phone interview.

James Coyle, another snowboarder who’s been coming to Cypress for five years, said he’s looking to buy a pass at Mt Seymour next year because the lift lines have been so bad.

“The busiest day of a regular season would be every day this season,” he told Daily Hive.

Cypress has implemented pay parking for non-skiers at the hill to alleviate the crunch at the lots, but Coyle has still had a difficult time finding a spot.

“Its just been so busy that it’s taken the buzz out of it for us,” he said.

But others have enjoyed their season at Cypress despite the crowding. Snowboarder Steve, who didn’t want to use his last name, said he prefers not having a reservation system because he can go up when he pleases.

Chamberlain, Cypress’ spokesperson, said the mountain is looking forward to going back to a more normal environment.

Mt Seymour did not return Daily Hive’s request for comment. But that mountain allows skiers and boarders to reserve four-hour windows at the hill.

Some Metro Vancouver school districts are already on spring break this week, and others will begin their spring break next week.