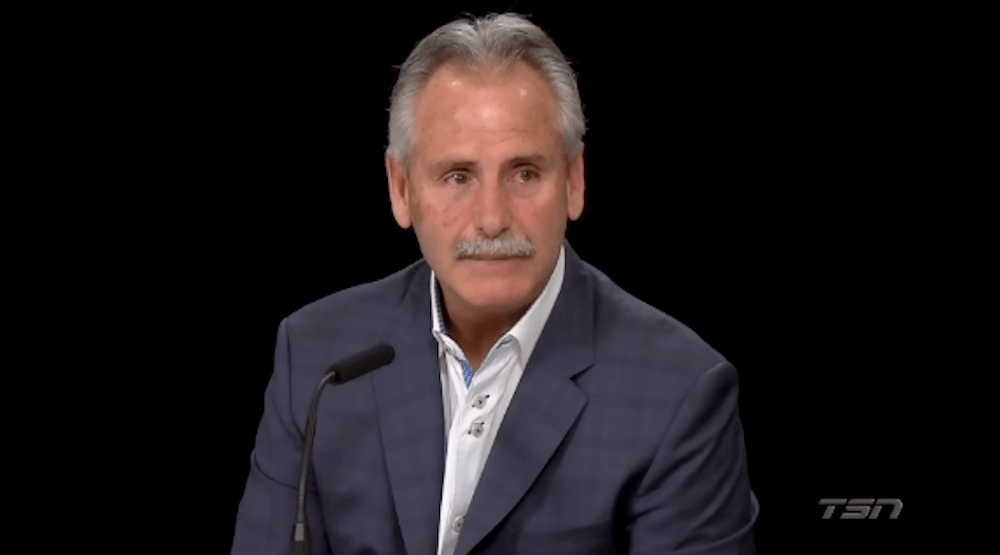 The 60-year-old head coach was emotional in thanking just about everyone he came across in his three seasons at the helm of the team. Class oozed out of Desjardins, as he spent nearly seven minutes thanking ownership, management, players, training staff, office staff, media, and fans.

It really was something else.

It would have been easy for a lot of coaches in Desjardins’ position to be bitter, particularly towards fans who have been venomous on social media and talk radio.

“The fans of Vancouver have been great to me. They really have,” he said. “Hard to believe, I haven’t had one bad comment made to me on the streets, not one.”

This job was Desjardins’ first in the NHL, and he clearly cherished it.

In sharing his feelings about how hard he worked and how badly he wanted to win, he shared a private conversation he had with Alex Burrows after he was traded.

“Alex said when he was going to leave: ‘I was just really disappointed that I couldn’t win a Cup in this market. I felt I let the market down.’ And that’s what I think. I think the same thing. To Alex Burrows, he didn’t let the market down, he gave everything he had. And I know that. I did the same.”

While he said the past two years took a toll on him, as it would any coach in this situation, it sounds like he would jump at a chance to run another NHL team’s bench.

Something may already be in the works, too.

In a press conference he didn’t have to participate in – many coaches leave town without speaking to the media – Desjardins also spoke about tactical matters.

Despite critique to the contrary, Desjardins said he didn’t have a problem playing young players, citing Troy Stecher, Brock Boeser, and others.

“I knew where the organization was and where it had to go. I have my beliefs in how you develop young guys. Maybe that was a little different than the media thought. I’ve developed a lot of young players in my coaching career.”

Desjardins was criticized harshly by fans and media for how he deployed his players, particularly with Bo Horvat early on, and Nikolay Goldobin late in the season.

After a 101-point season in his first year in Vancouver, the Canucks sunk to the bottom of the standings in the next two seasons under his watch. While as head coach he has to take part of the blame, it should be noted that the team in 2014-15 looked very different to the team he had the following seasons.

Not only were his veteran players older and slower, but a number of established players left town. This was his lineup for his first game behind the bench in October of 2014:

Clearly, through aging, trades, free agency, and injuries, his lineup was depleted by the end. Desjardins said it changed the way he coached.

“I definitely coached different than my first year or I have coached in other places. As a coach, you have to adjust to the players you have. You can’t just say, ‘we’re going to play this way regardless of who we’ve got.'”

While you couldn’t question the effort level from the Canucks for the most part, Willie’s team wasn’t as physical as he would have liked.

Desjardins thought the Alex Burrows trade took a lot out of his team, saying: “That sent a loud message to our team.”

For all the criticism Desjardins took – rightly so on many occasions – you couldn’t help but admire him as a person after this media conference, which lasted over 30 minutes.

“I wanted to say thanks.”