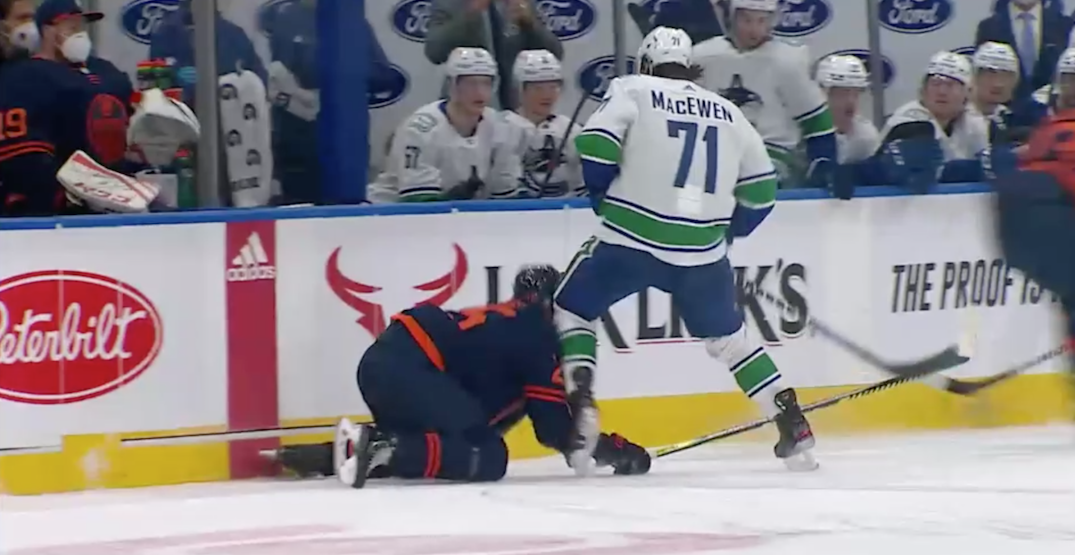 Zack MacEwen has been suspended for one game by the NHL, for kneeing Darnell Nurse in the head during last night’s Canucks-Oilers game.

Nurse threw a legal bodycheck on MacEwen, and was inadvertently high-sticked by the Canucks forward. While Nurse was on the ice, MacEwen extended his knee, grazing the Oilers defenceman’s head.

this is the clip i believe nhl dops is referencing when they mention zack macewen getting a hearing for kneeing darnell nurse. he appears to try and hit nurse, who was down on the ice, with a knee. pic.twitter.com/LcEameAvOl

In the video produced by the NHL that explains the suspension, the league said that even though MacEwen barely made contact with Nurse, the act in itself was “unacceptable.”

“While we agree with MacEwen’s assertion that the contact is not excessively forceful, the concept of intentionally kneeing a vulnerable player in the head is simply unacceptable,” the NHL spokesperson says in the video. “This is not a hockey play and it is only because the impact of this play is so light that MacEwen is not facing a substantial suspension for this action.”

Nurse was incensed by the act, and received a slashing penalty for going after MacEwen immediately after. The pair fought later in the game, at Nurse’s request.

All of this got Nurse two minutes for slashing pic.twitter.com/C43ekvabq8

The Canucks and Oilers play each other for the fourth game in a row on Saturday night.