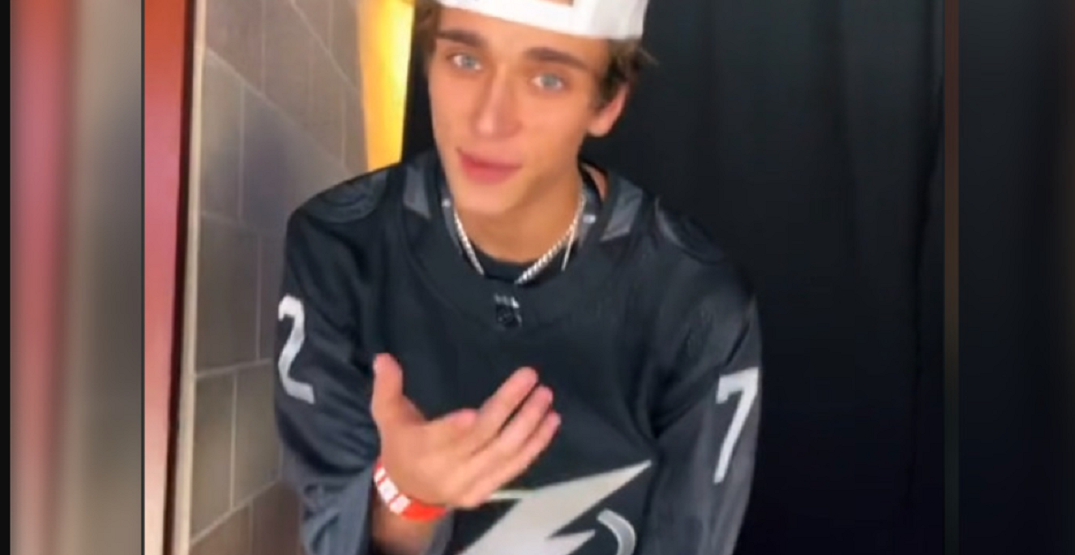 Well, that’s one collab for TikTok creator Josh Richards that came out of nowhere.

On Wednesday, the NHL announced that the 19-year-old Toronto-born influencer had been brought on as a special adviser to the NHL and will be acting as a “voice of the fans.”

Richards, who has over 25 million followers on TikTok, will be appearing at NHL marquee events such as the Stanley Cup Final.

“I want to thank the National Hockey League for giving me an opportunity to share my love of hockey with a whole new generation of fans,” Richards said in a release put out by the NHL on Wednesday. “I have always wanted to use my platform to educate and inspire, and I look forward to sharing my passion for hockey with millions.”

Richards, who also serves as the chief strategy officer for social media app Triller, posted his first NHL-focused TikTok in a Tampa Bay Lightning jersey ahead of tonight’s Game 2.

“I grew up a Leafs fan. If I cheer for the Habs, my parents disown me,” Richards said in a follow-up video that has since been made private. “It’s not a good look. It’s not the move. Fuck the Habs.”

But, like many things the NHL does these days, the collaboration wasn’t exactly-well received.

Fans were quick to point out that despite Richards’ audience, he was a rather strange hire to cater to new hockey fans. Richards’ TikTok feed is mostly filled with dance moves and videos of him hanging with other friends around Los Angeles: hardly the kind of content you’d expect from someone helping kids get into hockey.

Now who lied to the NHL and said Josh Richards would be good for “growing youth audience” pic.twitter.com/JPE9ZB3Iav

He looks like more of the problem. If you want to grow the league’s young fans, invest more in teams youth leagues by building more rinks & making it easier for those who don’t look like that guy to play & be interested (aka more females, more diversity, more mid-lower income)

I would bet that these committees, IF they exist, didn't come up with Josh Richards.https://t.co/iFCTxQT2j5

An added facet to the backlash was Richards’ affiliation to the ‘BFFs’ podcast, which he co-hosts along with Barstool Sports founder David Portnoy.

Despite referring to himself as “uncancellable,” Portnoy has a lengthy history of public misconduct, including widely reported accusations of harassing female employees, being forced to settle an anti-union lawsuit, using racial slurs, among other infractions.

Fans were quick to bring up the pair’s close association after the announcement came out.

if you scroll through josh richards tiktok its just white fuckboy dances or his podcast with dave portnoy.

it's actually astonishing how badly the NHL misses with everything they do.

casting a white boy who’s never expressed real interest in the nhl and who’s best friends with dave portnoy is probably the worst approach to “growing the game” https://t.co/mXMyiy6IyC

Who is Josh Richards?

Born in Toronto in 2002, Richards grew to prominence through the app Musically beginning at age 14 before it later was renamed to TikTok.

Richards also is a former member of the “Sway House,” a group of TikTok users that lived together in Los Angeles that included other big-name creators like Bryce Hall and Noah Beck.

Is this a first for sports?

To put it lightly: no. Other major North American sports leagues have brought TikTok influencers on in a formal role at their events in the past.

Sisters Charli and Dixie D’Amelio, who boast a combined 170 million followers on TikTok, accompanied Addison Rae (who has over 81 million followers of her own) at the 2020 NBA All-Star Weekend. At Super Bowl LIV in 2021, the NFL hosted the “TikTok Tailgate” pregame party, which featured a livestream concert as well as ongoing apperances from celebrities.