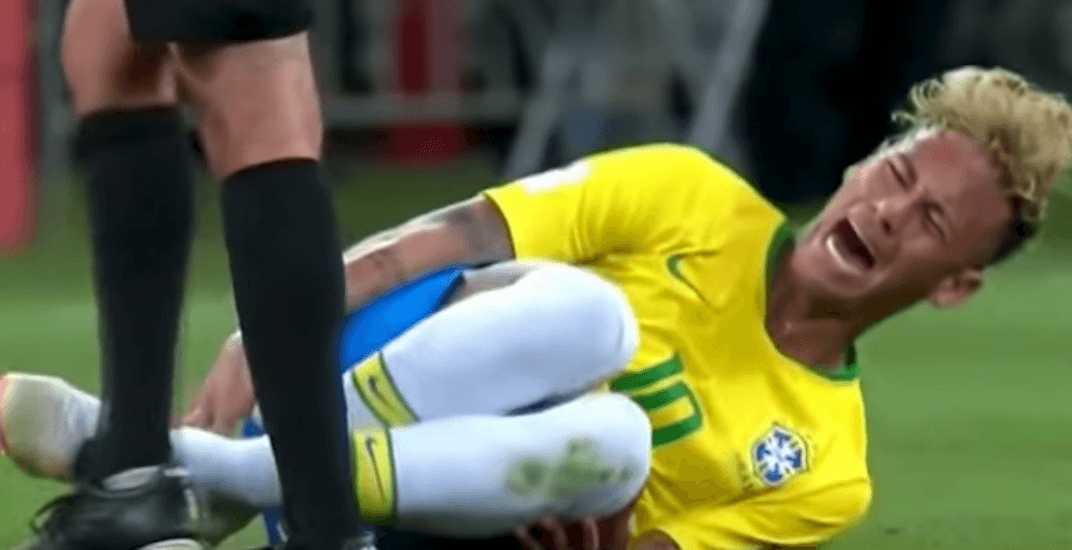 Neymar is Brazil’s best soccer player, and one of the most talented players in the entire world. The way he dribbles the ball and scores goals is a thing of beauty.

Unfortunately, he has also gained a reputation for his theatrics on the pitch. The reputation has been well-earned under the spotlight at the FIFA World Cup.

Many have joked that he deserves an Oscar for his performances, which would be accurate if his acting wasn’t so poor.

His log roll after being fouled in Brazil’s match against Serbia in the group stage has inspired some hilarious videos.

Neymar Rolling Memes Compilation …cause why not? #WorldCup #Neymar pic.twitter.com/4yAc60yyC0

He dramatically faked an injury after being touched by the cleats of an opponent during Brazil’s knockout stage win against Mexico. He flopped around like he had been shot, remaining on the field for 14 minutes.

this is why you’ll never reach Messi’s or Cristiano’s level @neymarjr pic.twitter.com/F69nahiOsF

“It’s an embarrassment for soccer that so much time was wasted on one player,” said Mexican Head Coach Juan Carlos Osorio, following the match.

“It’s not a good example for soccer, and for the world of soccer, for all the kids playing,” he added. “This should be a sport of ability, of determination, a game of men, not of so much clowning.”

Children have indeed been inspired by Neymar’s antics, albeit, in hilarious ways.

Let me introduce you to the Neymar game:

📹 [@ale_padin] | Everyone is making fun of Neymar. Even in football schools 😂. pic.twitter.com/Kem2ZWwF5l

While we’re on the subject, check out this hilarious Neymar-esq commercial by KFC in South Africa:

#NeymarRolling is all the rage these days. Absolutely unreal advertisement from KFC South Africa 😂🤣pic.twitter.com/5MqGJkDB6L

But perhaps the best thing to come out of Neymar’s embarrassing acting skills is this video, made by German YouTuber Der Schulte, that imagines Neymar in everyday situations.