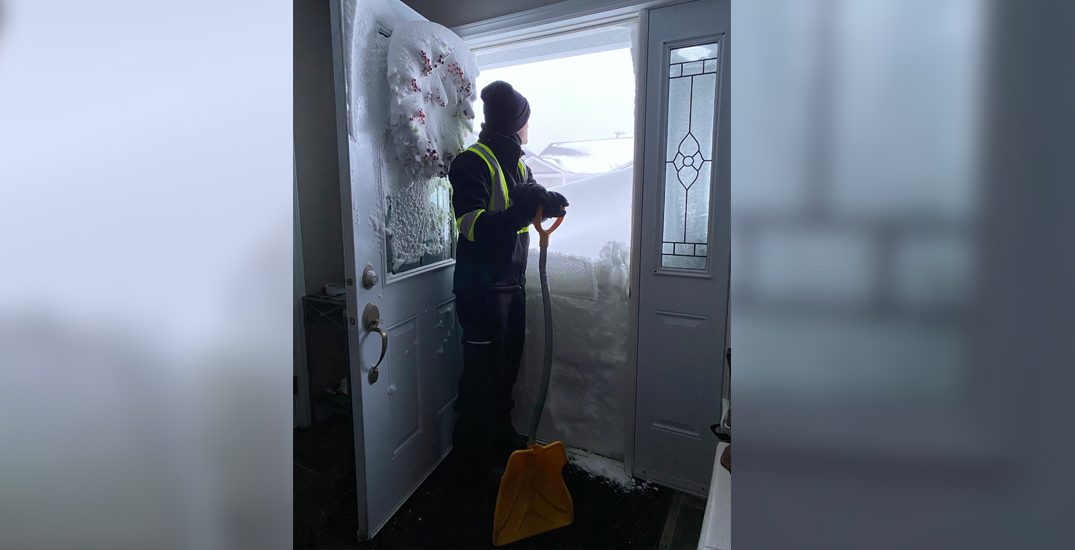 A blizzard warning in St. John’s has ended, and residents are attempting to dig themselves out of the record-smashing snowfall.

The snowstorm dumped nearly 75 centimetres on the city, prompting the local government to issue a state of emergency that’s still in effect.

On Saturday, people began clearing the snow, with varying degrees of success.

I’m really not sure how you begin to clear our street 🤔#nlwx #nlblizzard2020 #stormageddon2020 pic.twitter.com/19ncGgYFGJ

So snow update on my friend’s front door. They live in a lower apartment. These are shots of the daylight peeking through the top of the door as their landlord digs them out. #snowstorm #eek #frontdoor #dig #yikes #besafe pic.twitter.com/sNXImjc0Tq

Crosstown Highway in St.Johns, NL. Mother Nature is something to behold! Also a pic of me outside a neighbours door for extra perspective. pic.twitter.com/IAxOQCqC3c

My brother lives in #StJohns which currently has a state of emergency due to the #snow . Just look at it – crazy!!! pic.twitter.com/1cOjCAw63y

Turns out.. we were standing on my car 🙂 also hour 20 without power… #nlwx #nlblizzard2020 #newfoundland pic.twitter.com/Bzq5l8q2cr

Many residents are still without power, like Emily Eaton, who woke up to snow drifts reaching halfway up her front door.

“We’re used to lots of snow,” she told Daily Hive. “I mean, this is obviously a bit extreme.”

All flights in and out of St. John’s are cancelled until Sunday morning at the earliest, according to the airport.

There will be no flight operations until at least 8:30am Jan. 19th. The City remains in a state of emergency. While crews are working to clear the snow, people are advised to not come to the airport. Check with your airline directly for flight updates and rebooking. #nlwx pic.twitter.com/dEkLAt7Xtu

A few people had fun with the fresh powder though, like this person who snowboarded down the street. Check out that jump onto a building’s awning.