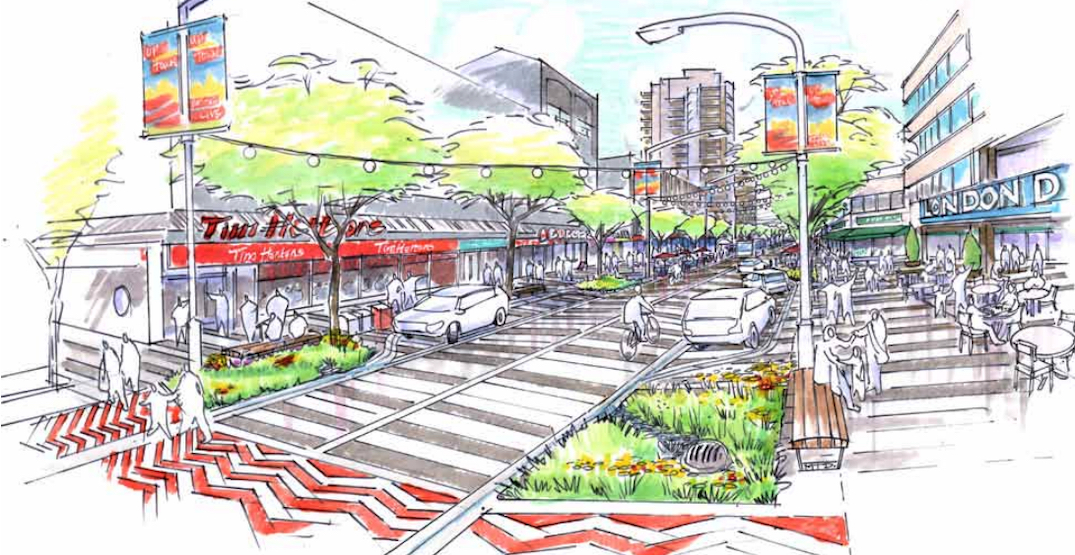 Transformative pedestrian-oriented changes are planned for the retail-lined streets of the Uptown district in New Westminster.

The municipal government has unveiled its medium- to long-term streetscape vision for Uptown, with specific focus on improving the length of 6th Street between 10th Avenue (next to the brand new New Westminster Secondary School) to the north and 5th Avenue to the south, and along 6th Avenue between 8th Street to the west and 5th Street to the east.

The planned street changes are highly comprehensive, with large sections of the curbside parking lanes along 6th Street reconfigured as flexible public spaces. 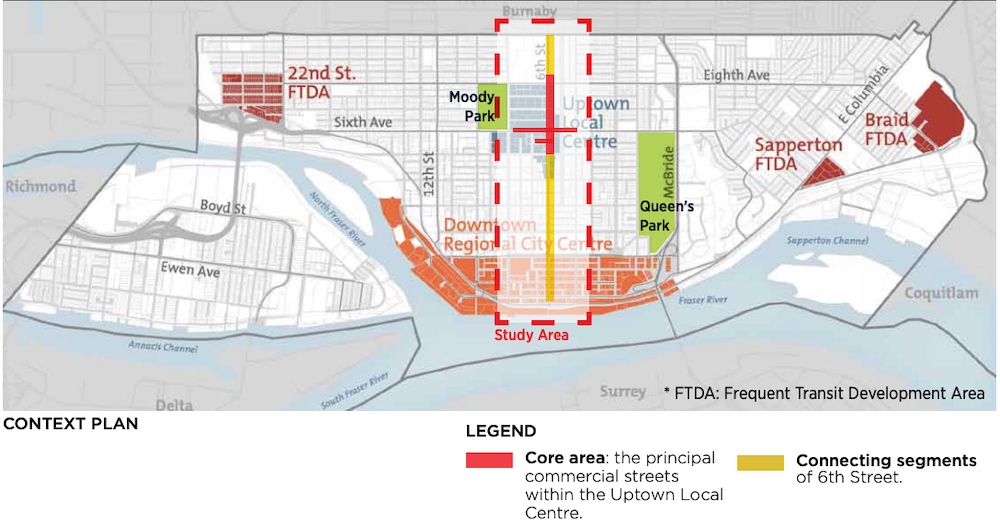 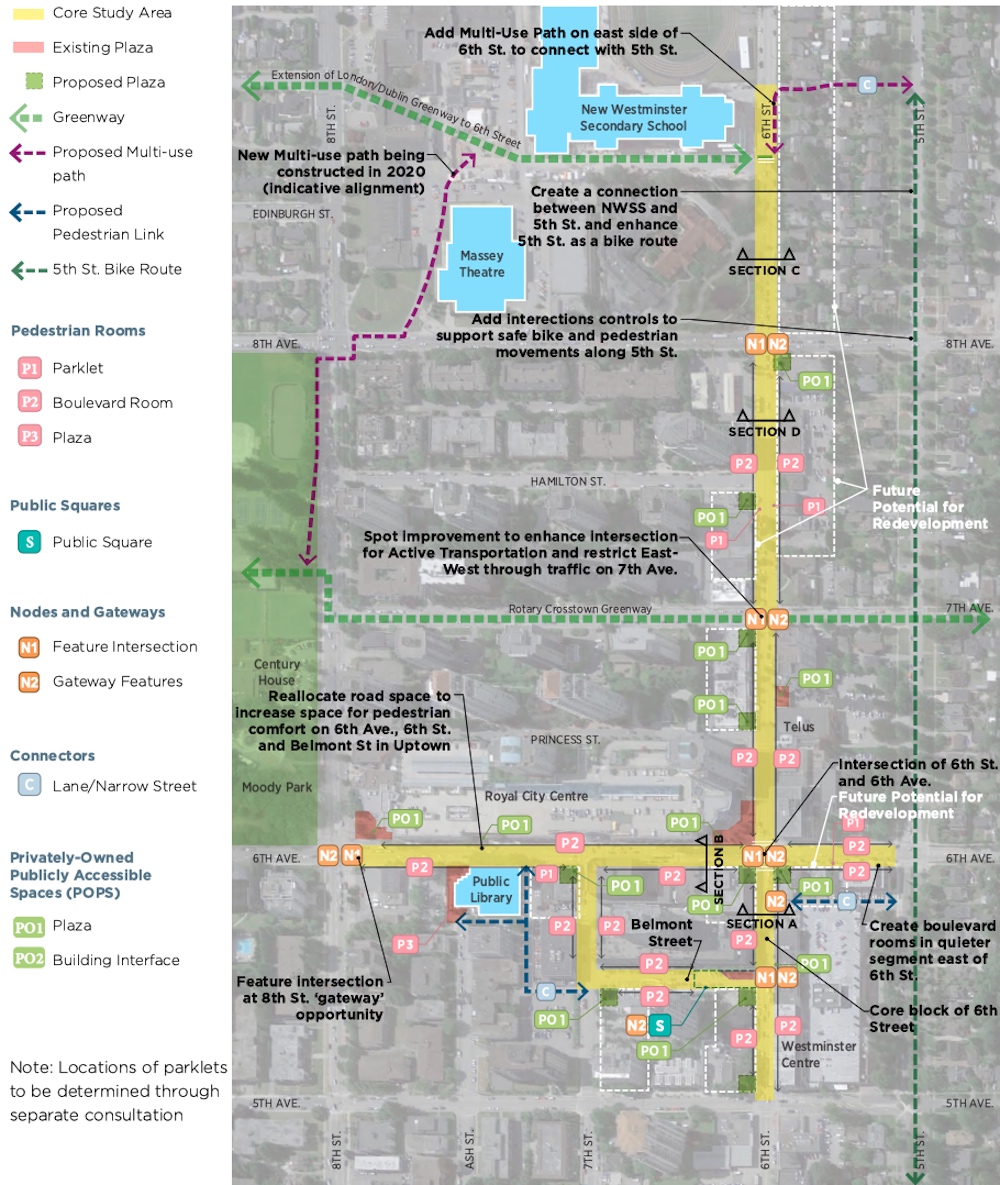 So-called “Great Street” principles will also narrow the road crossing distance for pedestrians through the construction of median islands and sidewalk extensions onto the curbside lane.

New pocket plazas are planned mainly at street corners, and “eclectic and artistic” laneway activations — similar to the laneway projects in downtown Vancouver — will create a new pedestrian-friendly public realm that also retains utilities and access to vehicles. 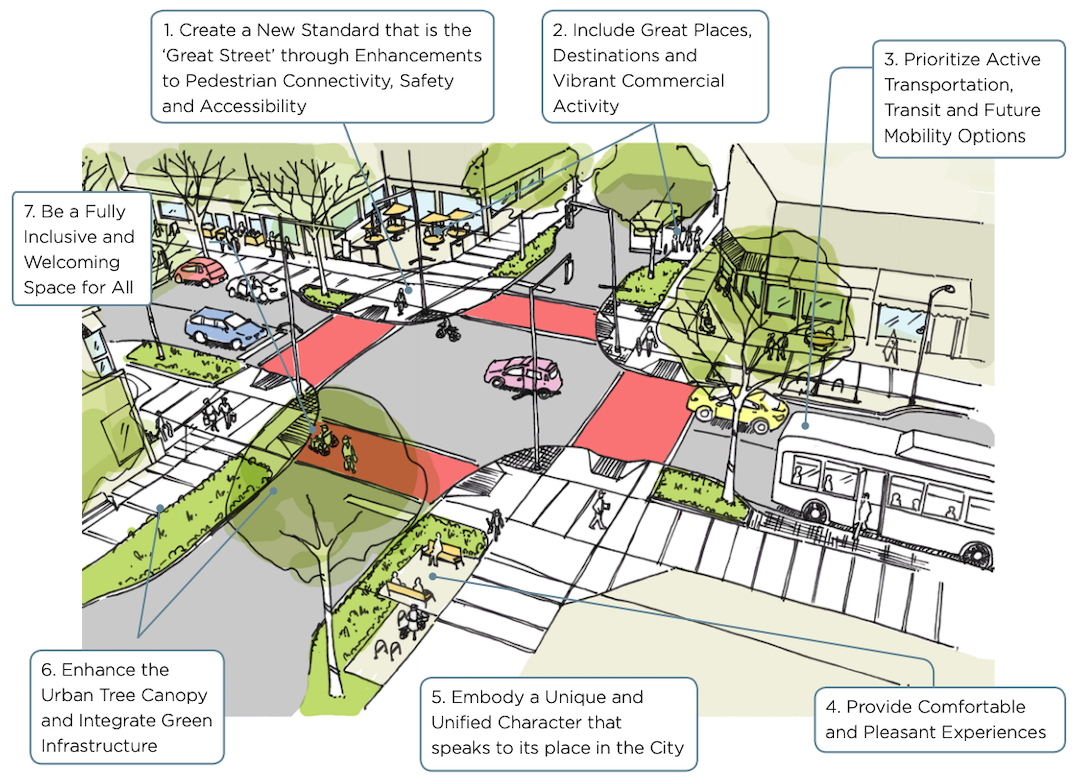 The overhaul includes an aesthetic redesign of the travel lanes of the core stretch of 6th Street between 6th Avenue and Belmont Street, with the roadway’s asphalt removed and replaced with striking cast-in-place concrete patterns.

Additionally, this core stretch will also see a new large public plaza from the closure of the eastern end of Belmont Street where it meets 6th Avenue. The eastern half of Belmont Street’s city block between 7th Street and 6th Street — already featuring a parklet on the curbside lane — will be redeveloped into a plaza, and a cul-de-sac will be added to the western half to maintain a vehicle connection to a building driveway. 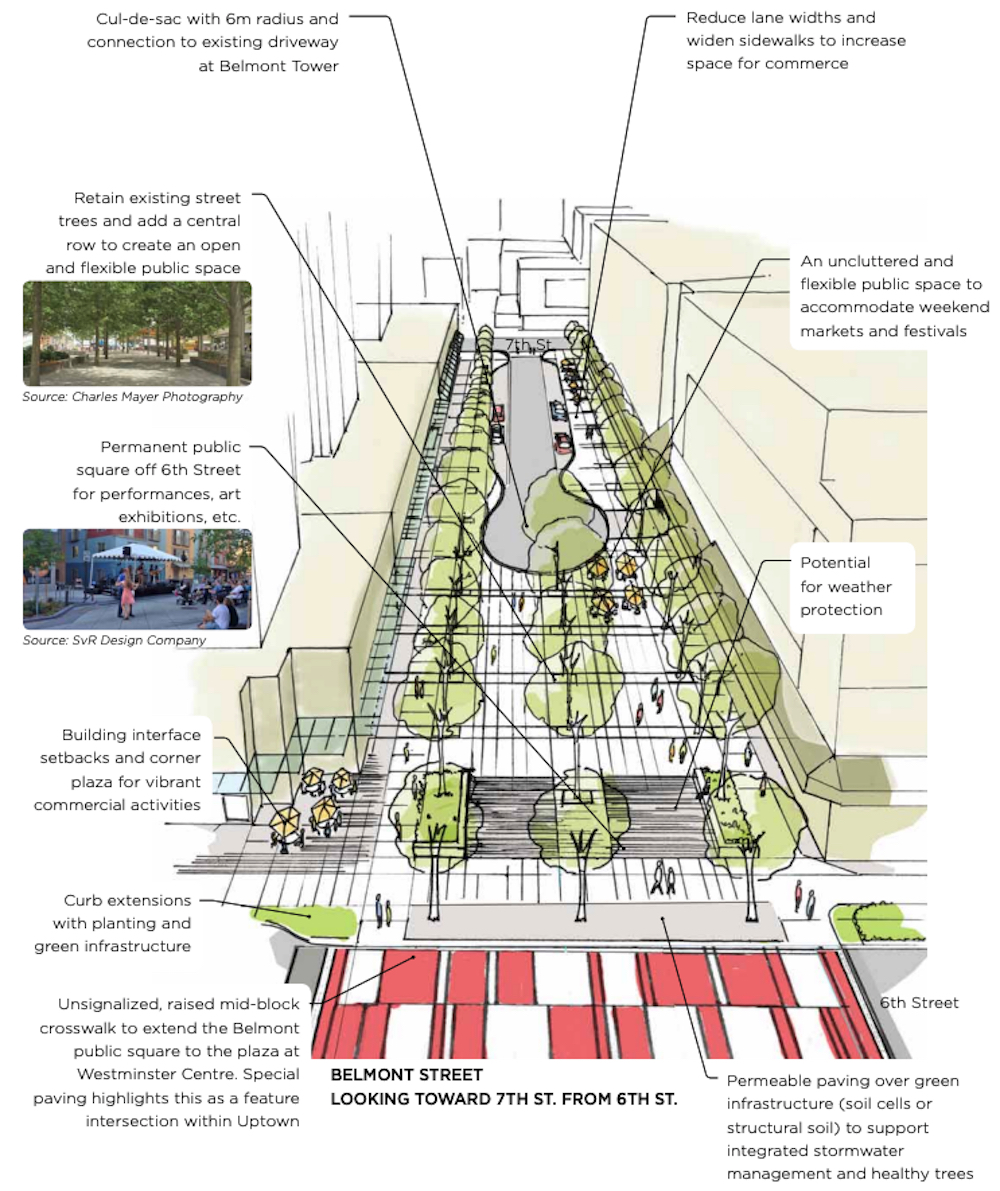 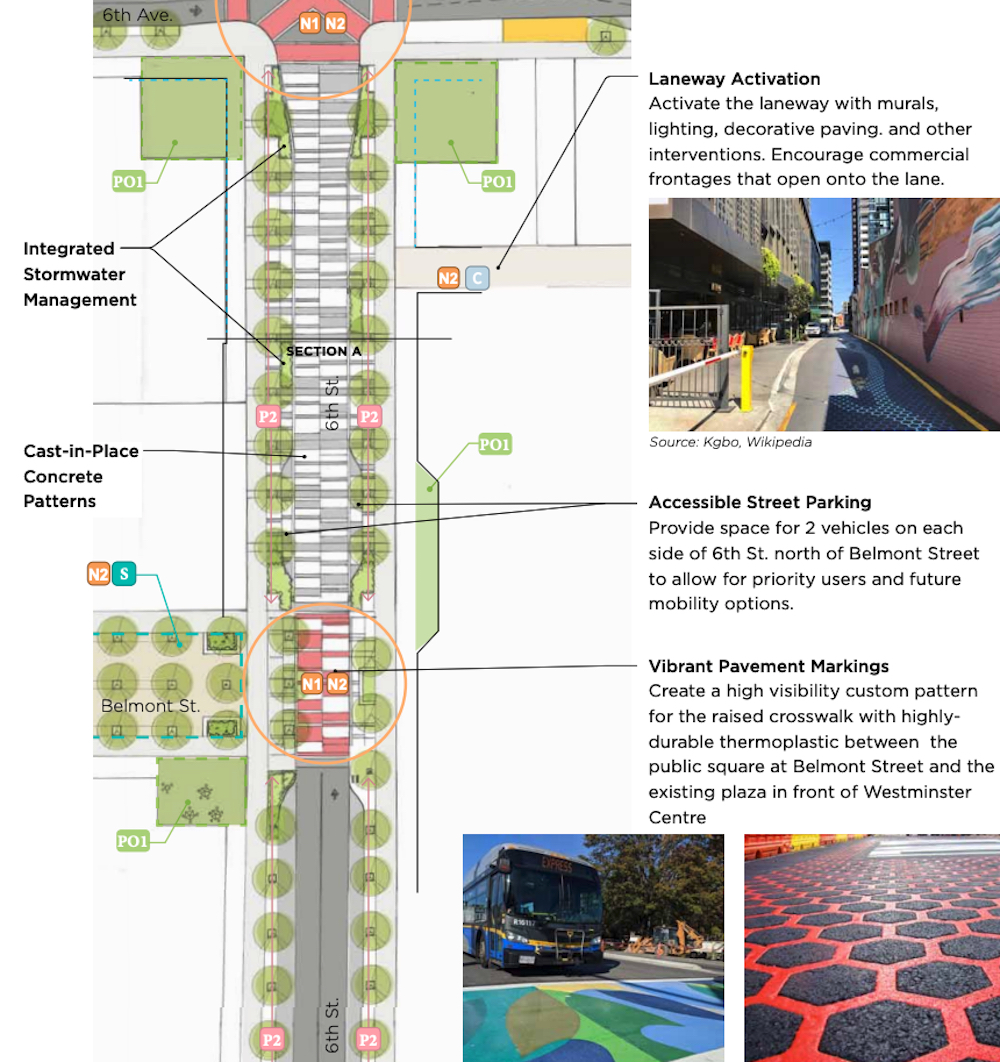 Site plan for the core stretch of 6th Street between 6th Avenue and Belmont Street. (City of New Westminster) 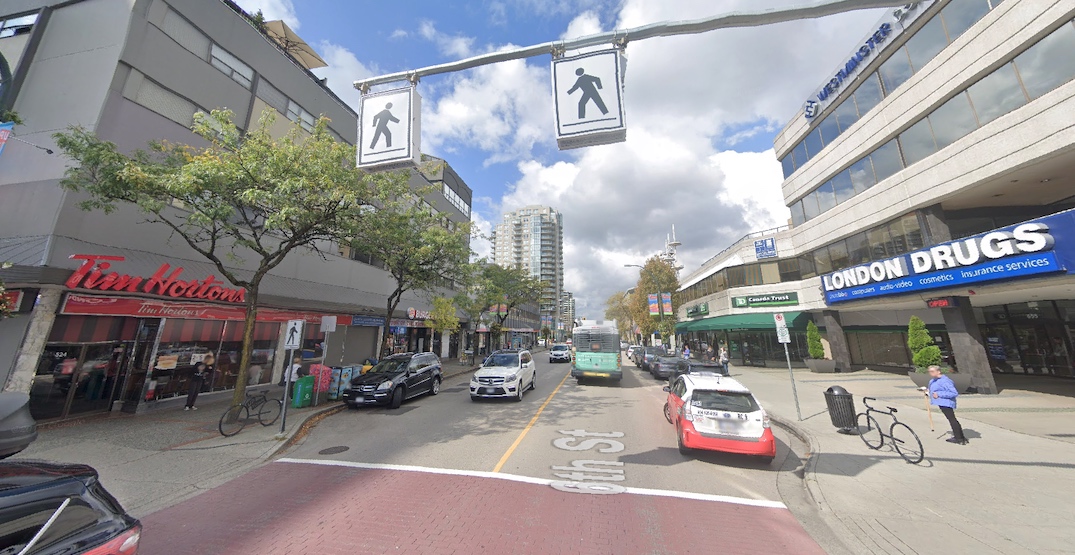 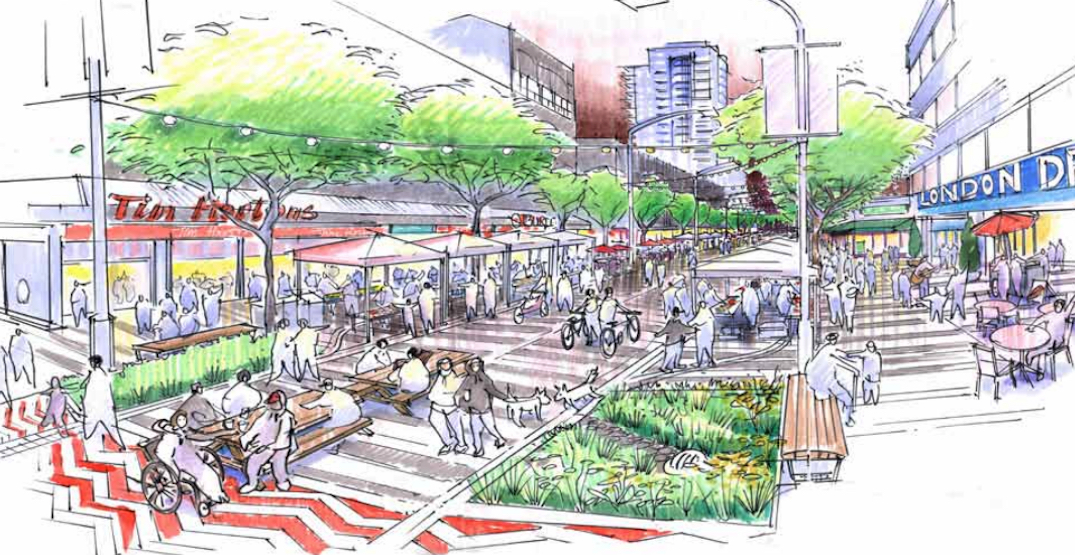 The core stretch of 6th Street carries an event-friendly design when it is closed to vehicles, effectively creating a temporary spillover plaza of the adjacent permanent public plaza on Belmont Street.

Site plan of the changes to Belmont Street for a new public plaza. (City of New Westminster) 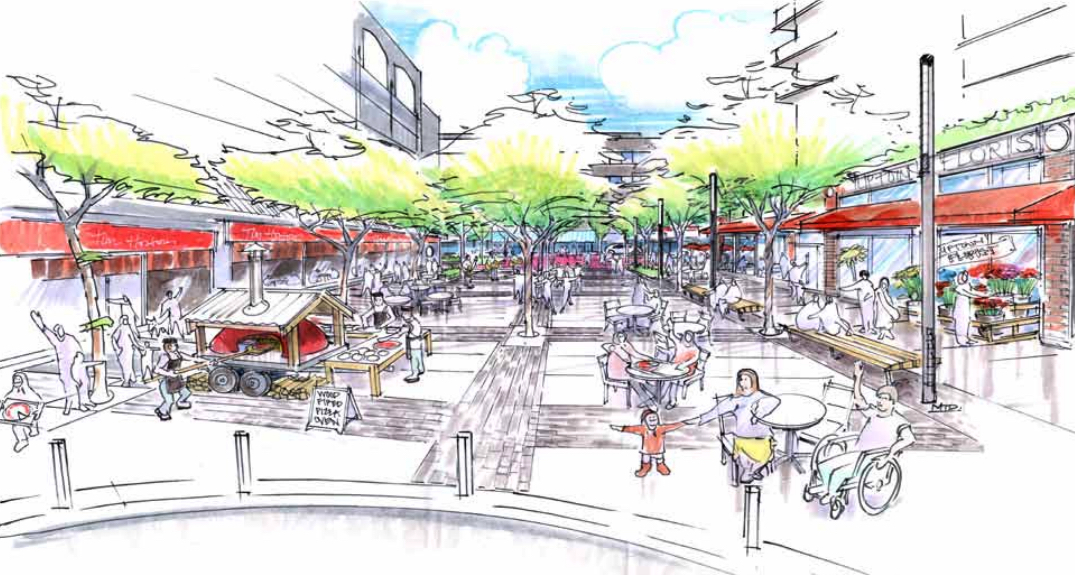 Artistic rendering of the changes to Belmont Street for a new public plaza. (City of New Westminster)

At the northern end of the core stretch, the prominent intersection of 6th Street and 6th Avenue — right outside Royal City Centre shopping mall — could see various public space improvements, including a pedestrian scramble with traffic signals that allow pedestrians to cross in all directions at the same time, even diagonally.

Bus-priority measures to help speed up and improve the reliability of buses are envisioned for the corridor, such as traffic signal priority from the installation of bus detection at key intersections, the removal of on-street parking in peak hours at select locations, and bus stop bulges on the curbside lane so that buses do not have to pull in and out of the travel lane. 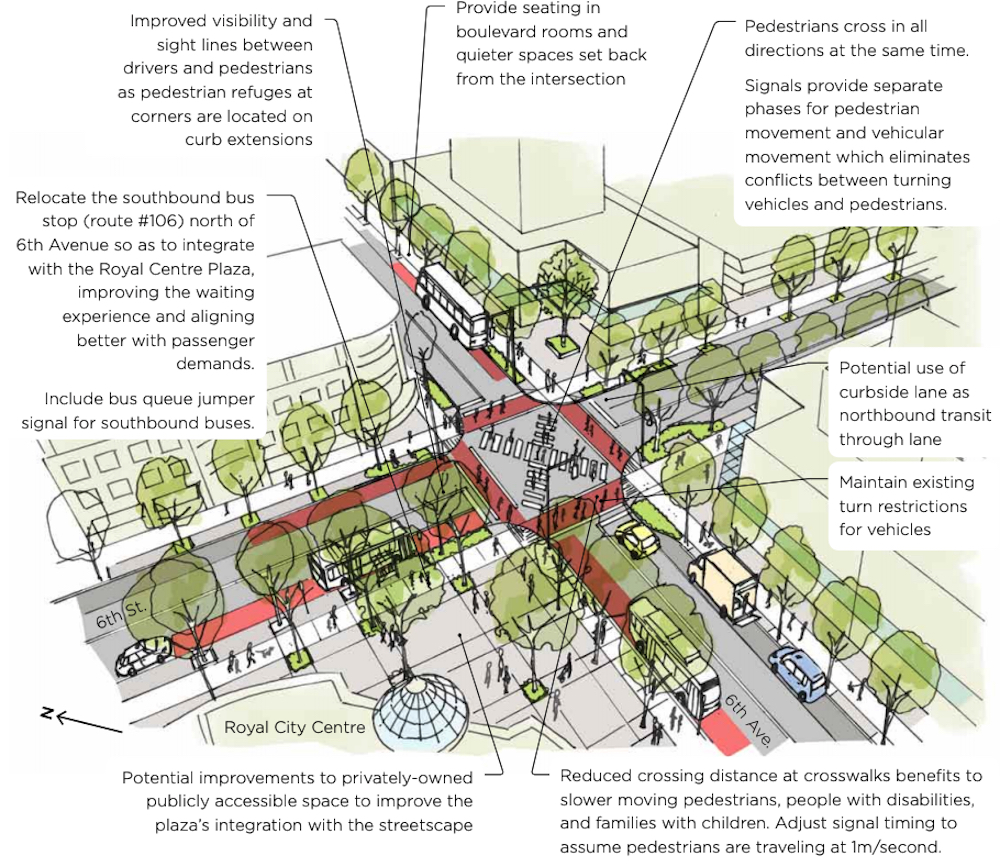 Artistic rendering of the street changes, including the pedestrian scramble, in and around the intersection of 6th Street and 6th Avenue. (City of New Westminster)

Some of the city-led public realm improvements could be performed in conjunction with utilities upgrades that require digging up roadways.