Dubbed the ‘Q to Q’, the new ferry operates from the dock below the Inn at the Quay – next to the River Market – to the Port Royal public dock in Queensborough.

“Connecting the Queensborough and Quayside neighbourhoods has been a long-standing priority for the City of New Westminster,” said New Westminster Mayor Jonathan Coté in a statement. “The demonstration ferry service is a unique transportation alternative for accessing local businesses and destinations.”

As a pilot project, it will initially run every 20 mins on Saturdays, Sundays, and holiday Mondays from August 4 to September 24 between 9 am and 7 pm. And on Friday evenings throughout the month of August, it will make sailings from 5 pm to 9 pm, coinciding with the Fridays on Front event.

Each one-way crossing across the Fraser River takes about five minutes. Comparatively, it is a 15-min drive or a 30-min bus ride between the two docks. 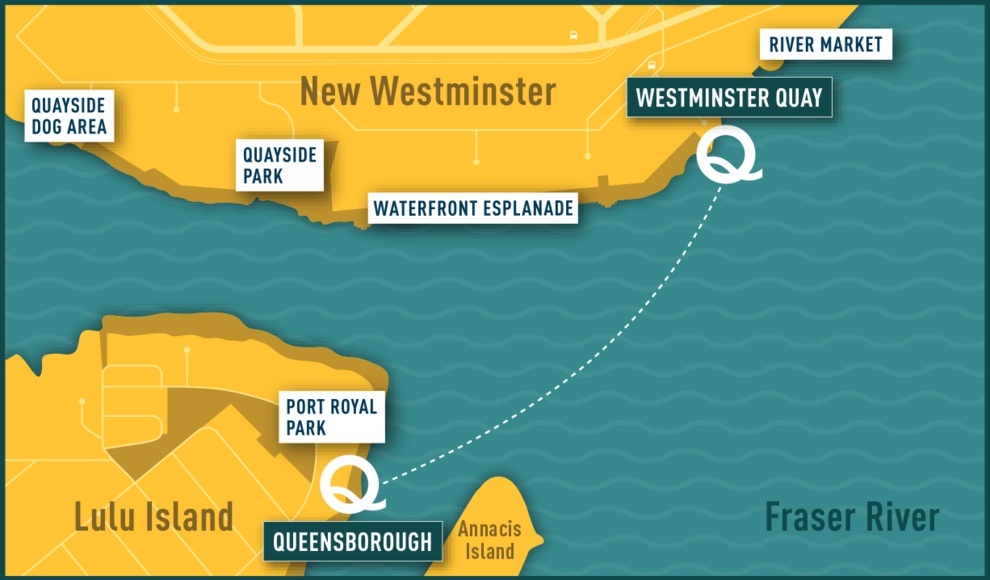 Earlier this summer following a procurement process, BC-based private ferry operator Western Pacific Marine was selected by the City of New Westminster to run the new service. It will use a ferry vessel with a carrying capacity of up to 40 passengers and four bicycles.

Fares are highly nominal at $2 for adults, $1 for seniors and children between the ages of five and 16, and free for children under five.

The municipal government says statistics and information collected from this initial service period will be used to determine the feasibility of a future permanent connection, whether it be a frequent, daily ferry service or a new purpose-built bridge for pedestrians and cyclists.

New Westminster City Council decided to pursue a ferry pilot project after a plan to build such a bridge fell apart last fall due to high costs.

A study found that a 230-metre bascule draw bridge, built high enough for tall vessel traffic to pass through, would cost $39.1 million to construct. This figure is far greater than the $11 million allocated in the City’s budget for the project.

For more information on the ferry schedule, visit the City’s website.

Early conceptual artistic rendering of the Q2Q Bridge across the Fraser River. (City of New Westminster)