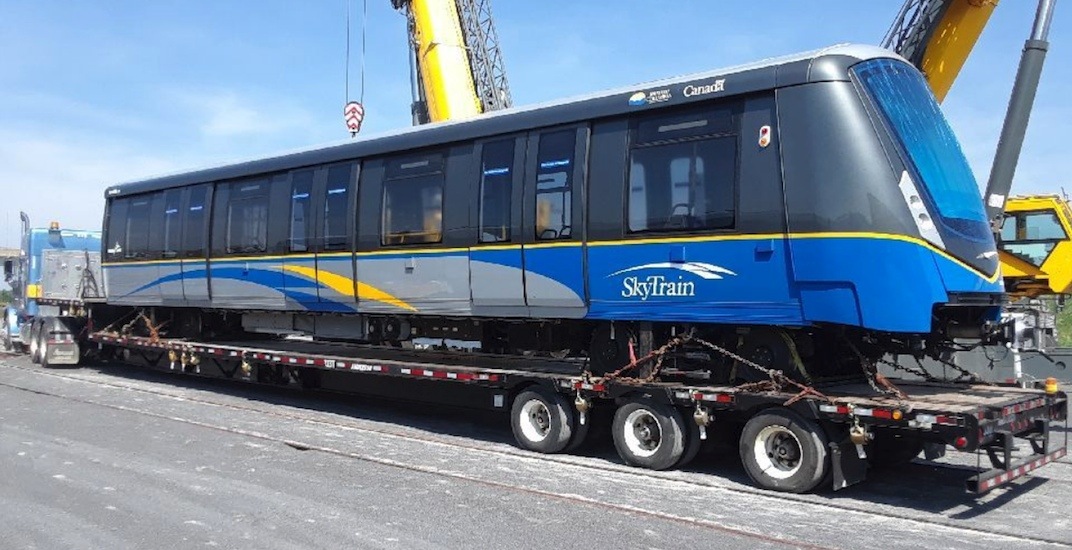 New SkyTrain Mark III car being delivered on a flatbed truck from Ontario to Vancouver. (TransLink)

There will be a trickle of SkyTrain cars making their way westward on the Trans Canada Highway over the coming year and a half.

TransLink says the first four Mark III cars for the Expo Line and Millennium Line are now being shipped on flatbed trucks from the Bombardier factory in Kingston, Ontario to Vancouver.

A total of 56 new cars will arrive in two batches, with the first batch of 28 cars arriving by early next year and another 28 cars by the end of  2019.

Upon arrival, they will be connected to create 14 fully-articulated, four car trains – just like the new trains that arrived in 2016 – and undergo additional testing before entering service, effectively creating more capacity. Each four-car Mark III train can hold up to 532 passengers.

The new trains and the resulting distribution of the existing fleet will increase capacity on the Expo Line by 10% and the Millennium Line by 23%.

The public transit authority announced earlier this year it is accelerating its train orders due to overwhelming ridership demand. This also includes 24 additional cars for the Canada Line from South Korea’s Hyundai Rotem, which will be shipped to Vancouver by the end of 2020.

Further orders of Mark III cars beyond 2020 will allow for the gradual retirement of the old Expo-era Mark I cars beginning in the middle of the next decade.