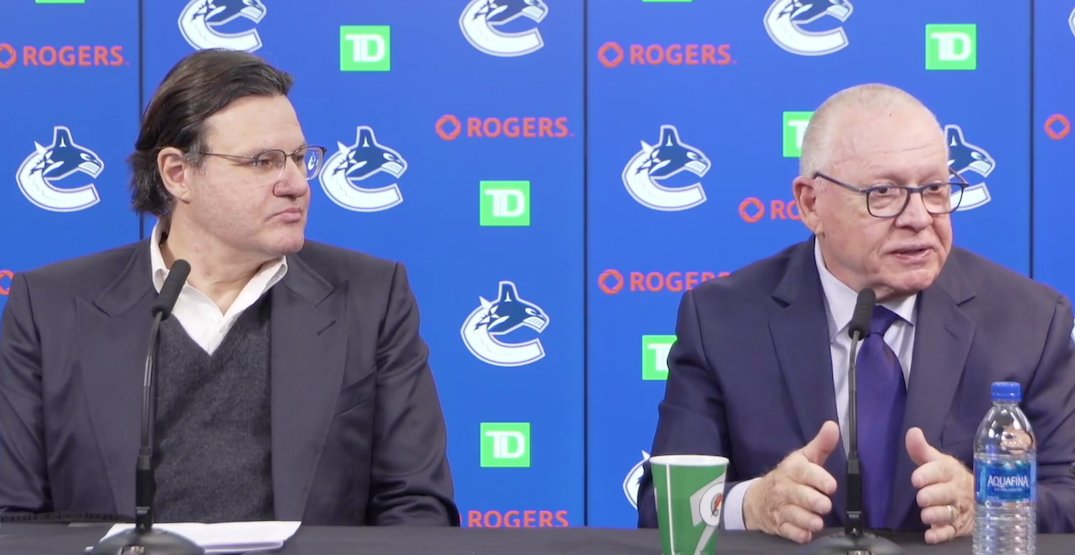 Francesco Aquilini summed up one of the busiest weeks off the ice in Vancouver Canucks history rather appropriately.

“Another week, another press conference.”

Aquilini went many years without facing the media, but in the span of seven days, he’s stepped up to the podium in the Norm Jewison Media Room at Rogers Arena twice.

Today it was to introduce Jim Rutherford, the Canucks’ new president and interim general manager.

“Jim was at the top of my list for candidates to come in and turn this franchise around,” Aquilini said. “We brought him here to Vancouver to win our first Cup.”

Rutherford didn’t make any big proclamations today, as he’ll understandably need a few weeks to assess his team. But he’s coming in with eyes wide open.

“I saw what you guys saw in the first 20 games, a team that underperformed,” Rutherford told the assembled media at Rogers Arena. “As I thought more about this team and what I saw, I saw something in it and I certainly saw a lot in this franchise, in the Canucks brand, that I decided that I’m going to take on this challenge.”

“We’re going to do the best we can to change the culture and get to a point where we have a consistent playoff team that can grow into a contender and give us a chance to get to the ultimate goal.”

Rutherford has a reputation as an executive that likes to make a lot of trades, but he didn’t promise a quick fix.

“I don’t have a good answer for you yet,” Rutherford said in response to a question about whether his roster needed small tweaks or bigger moves to become a Stanley Cup contender.

Rutherford spoke highly of Quinn Hughes and Elias Pettersson, and he went out of his way to refer to Thatcher Demko as a “franchise goaltender.”

“There’s a lot of good players here, but there’s some areas that definitely need to be improved. How long will that take, especially with where we are in the cap, we have to get very creative.”

Rutherford said he doesn’t want to trade draft picks in the early rounds, saying the Canucks aren’t in that cycle. That’s a departure from the previous regime, which didn’t have a first-round pick in consecutive years for the first time in franchise history.

“I want to be careful with our trades,” said Rutherford. “I don’t want to trade draft picks unless they’re later round picks. It’s not the cycle we’re in to trade high draft picks. The trades that we make, I prefer that we’re gaining some age on it, so as we move along, if it takes a couple years to bring it together to be more of a contender, then we got the right age group, that they can come together.”

One thing Rutherford really values? Having a fast team.

“What I’d like to see… is starting to play quicker,” Rutherford said. “We don’t have a fast team where we got a lot of fast skaters on it. That’s really what I prefer. But if you don’t have fast skaters, you have to be smart. You have to play quick. front pressure, puck pressure, back pressure. Support your teammate when he’s battling for a puck.”

Rutherford’s track record isn’t perfect, but it’s hard to argue with a resume that includes three Stanley Cups. He said he didn’t regret trading for Jack Johnson and Erik Gudbranson while in Pittsburgh though — two players that the analytics community correctly identified as overvalued.

“I use analytics a lot, and I really like it,” said Rutherford. “But it’s not what I make my decisions on.”

Rutherford admitted that he wasn’t sure if he was going to retire after leaving the Penguins, and that Aquilini convinced him to come to Vancouver. The 72-year-old executive was wooed by Aquilini, who met him at his house. Rutherford was clearly impressed by the gesture.

“I enjoyed my time with Francesco. He did something that I really couldn’t imagine… that an NHL owner would come directly to my house to meet me,” said Rutherford. “That was pretty special.”

When Aquilini fired Jim Benning, Travis Green, John Weisbrod, and Nolan Baumgartner eight days ago, they were largely viewed as necessary and overdue moves to make. It has to be said that the moves since then have been odd in their process.

The wheels were in motion for Rutherford to come to Vancouver before Bruce Boudreau was hired and before Stan Smyl was told he’d be the team’s interim GM.

Aquilini promised an extensive search, but Rutherford appears to be the only person that interviewed for the job, judging by the Canucks owner’s non-answer to a question. He consulted with Rutherford before hiring Boudreau, getting his blessing before announcing that move. The Chris Gear and Jonathan Wall dismissals were Aquilini’s call though.

“We needed a new culture,” Aquilini explained. “We decided as an organization just to clean the slate for Jim, and Jim is going to bring in his people to start over again.”

“I didn’t request any moves,” said Rutherford. “But when you’re changing the culture, sometimes when you have people that have been here a long time, it’s harder to do and what I’m trying to do is change the culture to that consistent, positive, winning attitude. I’m not saying that those people couldn’t do it, but I think the more new fresh people we have in there the easier it’s going to be to do.”

Rutherford says he has a list of 40 potential general managers and could start making calls as soon as tonight. He’s also looking to bring in an assistant GM this week.