Google Maps view of the neighbourhood

A small neighbourhood in East Vancouver has been thrust into the spotlight after a parking lot dispute went viral.

Earlier this month, Daily Hive brought you the story, which garnered a lot of attention on TikTok — 1.6 million views and over 24,000 likes.

Accusations were flying in both directions among people in the quiet neighbourhood, and now the family in the middle of it all is telling Daily Hive their side of the story.

The family involved is the Mirza family. A dad, mom, and four kids.

They moved into the neighbourhood in March 2021, and Farooq, the father, said there was tension with people in the area since well before the parking dispute. He believes some of it may be racially motivated as he is a Muslim who comes from Pakistan, and his wife, Anya, is Ukrainian.

Mirza didn’t try to sugarcoat the relationship with Jade Ronni — the woman who posted the now-viral TikTok video — and was clear that there was always friction.

He claims that last summer, there were a lot of outdoor parties across the street, sometimes going into the early morning hours. He ended up needing to call the police to file a noise complaint. He believes some of the ongoing tensions have been about taking revenge for some of those earlier matters.

Consequences of the parking dispute

Mirza told Daily Hive that the day after the dispute, his business was inundated with thousands of phone calls from all around the world, and his business — which he has owned and run on Commercial Drive for over two decades — was bombarded by hundreds of negative reviews.

Google has since removed many of the reviews. Another strange turn in the fallout of the original story is the fact that Ronni has started a GoFundMe page, with a goal of $1,111 to help with “costs related to my current situation.”

Mirza claims that a day after the parking dispute, Friday the 13th, he received a strange call to his business. He answered with his usual greeting, and a female voice on the other end asked for him.

After that, things got dark. Mirza claims a female voice said, “You watch out c*nt. My guy is gonna come and kill you.”

He reported the call to the police. He alleges it may have been Ronni.

He took a picture of the number on the call display and Daily Hive attempted to reach the caller, but repeated attempts went to voicemail with a greeting from a female voice. It is unclear whose number it is.

There have also been allegations that the family has keyed vehicles in the area for parking in the spaces next to their home, but Mirza says they’ve also been victims of vandalism, claiming that on two separate occasions someone punctured the tires on his vehicle. There were also claims that his family left nasty notes on cars, but Daily Hive has yet to see any proof of the claims on either side.

“We have the right to park in front of our home,” Farooq said.

He’s not necessarily wrong about rights from the standpoint of city bylaws.

The city and the police

According to City of Vancouver Bylaws section 17.6(f), you actually technically can only park at another person’s residence for a total of three hours between 8 am and 6 pm. It’s obviously not a bylaw that’s enforced too heavily.

Mirza claims that when he first tried to approach Ronni about the parking situation around the time he came to the neighbourhood, he did so from the standpoint of a formal greeting. He claims she responded aggressively and told him to get off her property.

Now Mirza says she does it just to irk the family. In the case of the last story, she achieved that goal and got her 15 minutes of fame on TikTok.

He also thinks that both the Vancouver Police and the City of Vancouver have not done enough to resolve disputes like this.

In the case of the viral TikTok video, Mirza claims that they only spoke to the police for a few minutes and that the police never approached her about it as she sat in her car. While the VPD told Daily Hive that the situation was resolved, he disagrees and feels like they took Ronni’s side in the matter.

Then there’s the GoFundMe: 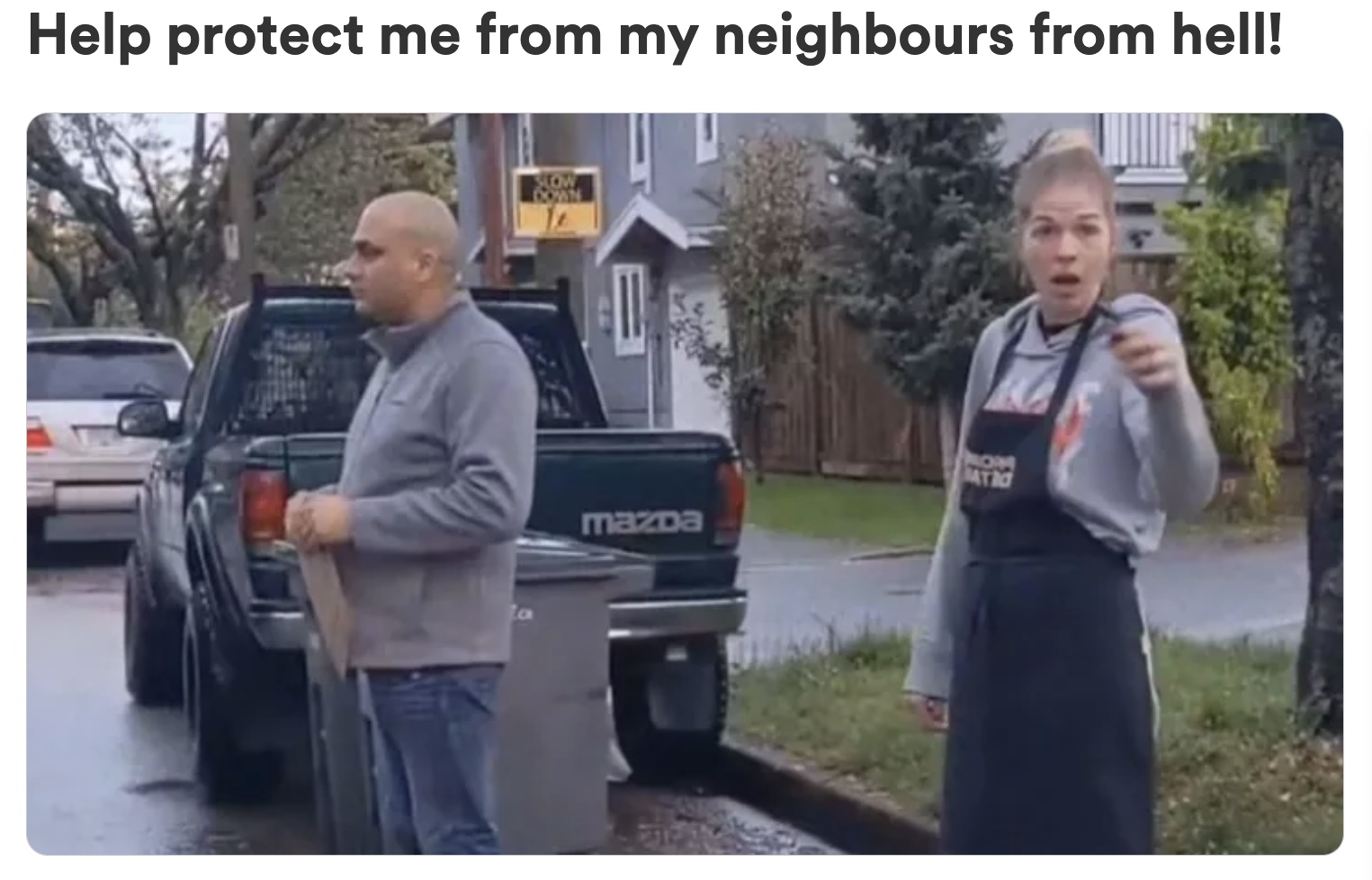 That was Anya’s reaction to the GoFundMe created by Ronni. They recently installed security cameras because according to them, they’ve been the ones going through hell.

This is the blurb from the GoFundMe page:

“My neighbours have been harassing the community over parking since they moved in last year. They leave nasty notes, show up to your door in the middle of the night to yell and swear at you and have even been accused of vandalizing a neighbour’s car on three separate occasions. They have bullied and intimidated others from parking on the street beside their house even though they have no right to do so (it’s public street parking in an overcrowded neighbourhood with more people and cars than parking spots – the struggle is real – especially when someone has five cars to one household).”

Ronni is hoping to use the funds to purchase more security cameras to protect her house as “these people have proven to be aggressive and unreasonable as well as unafraid of resorting to crime and intimidation.”

“Funds will also go towards any legal fees incurred and as so many of you have pointed out a much-needed new windshield. Anything extra will go towards therapy and dog treats as we’re all going to need help recovering from this stress!”

The Mirza family denies the allegations of bullying or intimidating others. The claim about having multiple cars is true, but the family rents to tenants in the basement who have vehicles.

In the end, it’s not the attacks on Mirza’s business or what people think on the internet that he worries about.

“I worry about my close relatives or people who know me.”

When it comes to his reputation, Daily Hive made a few calls to businesses in the neighbourhood who claim they’ve never had an issue. We called the business next door who told Daily Hive they’ve always been friendly. Other businesses had nothing bad to say.

It’s unfortunate that so much hate and anguish could stem from a simple neighbourhood parking dispute. It has led to tensions in the neighbourhood that has left one woman fearing for her safety, and has left a family fearing for their safety and the safety of their kids.

Was there some pettiness from the standpoint of the Mirza family about the parking spot? Possibly. Was there possibly some intentional provocation to get a reaction out of them? Maybe.

Could this all have been avoided? Definitely.

Daily Hive has reached out to Ronni for a response.