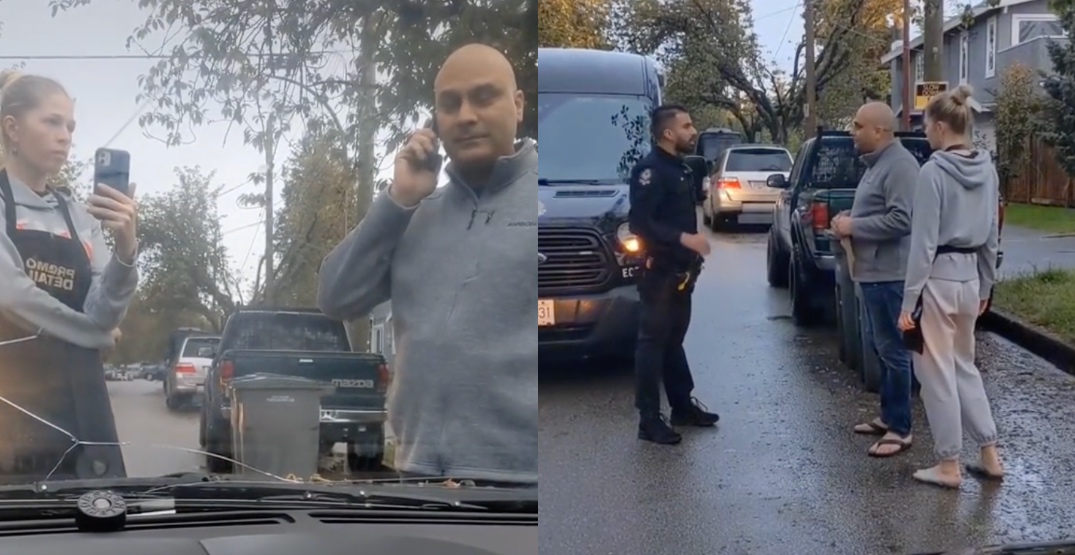 “They don’t want me to park here. I’m gonna park here, though.”

A series of videos on TikTok that capture the standoff over a parking spot in a Vancouver residential neighbourhood has gone viral this weekend.

TikTok user Jade Ronni @jaderonni uploaded five short videos on Saturday, May 14 that document her confrontation with her neighbours that ended up in the police attending the incident.

Daily Hive is in touch with the family at the centre of the story, who are concerned about the “misinformation” in the video. They said there’s a long history between them and Ronni, and that the video series doesn’t show the whole story.

According to the family, the incident occurred at around 8:30 pm on Thursday, May 12, and since then they have received death threats at their place of business.

According to Ronni in the videos, she is trying to park across the street from her home when her neighbours physically block her from parking her vehicle.

After some time, the police arrive, and you can hear the conversation between the officer and the couple, where the police officer advises them that Ronni will be parking in the spot and if they have an issue with the parking rules they can take it up with the city by-law office.

In the first three videos, Ronni introduces her neighbours. She says that they don’t want her to park in front of their house.

“They’re making me block traffic because they’re refusing to move in front of my car,” she says.

In the fourth video, Ronni pans the camera around to show that she lives just across the street and would like to park her vehicle in the open spot nearby.

In the fifth and final video, Ronni films a police officer speaking to the couple. You can hear the officer explain that if the parking spot is empty and someone wants to park there, they can.

The officer throws up their hands while speaking to the couple, “That’s up to the city by-laws,” they say. “She’s parking here, it’s too late.”

Speaking with the family in the video, Daily Hive has learned that the family filed a police report after Ronni allegedly pushed one person with her vehicle, bruising their leg, and called in death threats to their place of business.

“And before this interaction on the video…my dad was moving the bin, then she came and wanted to park,” the family told Daily Hive.

“But the thing is, she’s been doing this for so long. She has an empty spot in front of her house, on the other side of the street and she can park there.”

“She wants to park in front of our place to get us riled up in some way, hence, after so many times of doing this, she finally got my dad and my stepmom riled up and finally was able to get it on camera.”

A photo supplied by the family reportedly shows an open parking spot by Ronni’s residence during the altercation.

Daily Hive has reached out to the video poster Jade Ronni, the Vancouver Police Department, and those in the video for more information and will update this story.