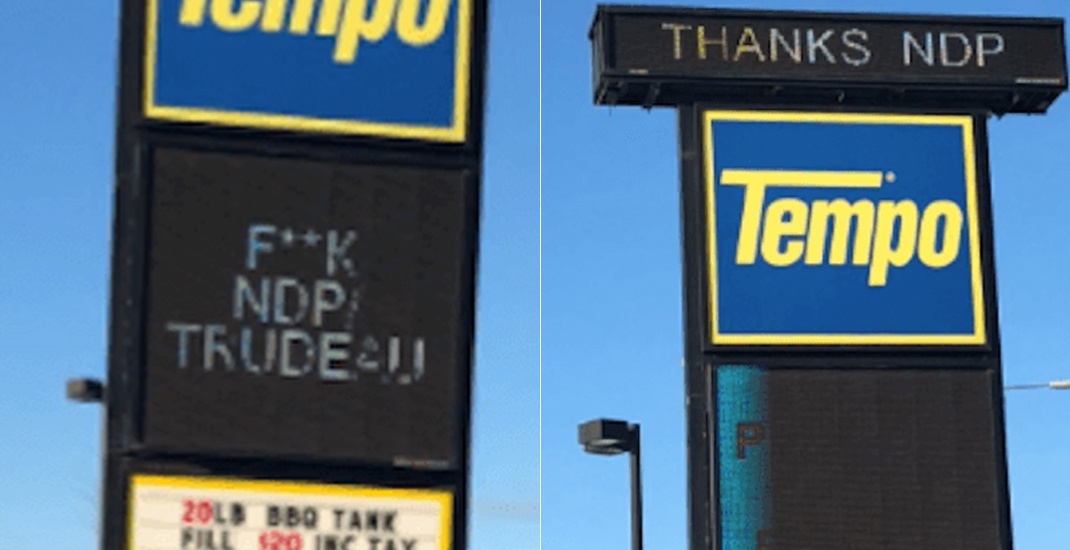 A gas station in Spruce Grove has sparked online debate over a controversial message.

The Tempo gas station was running “F**K NDP/TRUDEAU” over its light-up display on the side of 1 Avenue E in the Edmonton suburb.

The message comes shortly after the provincial government instituted a carbon levy increase from $20 to $30 per tonne on carbon dioxide emissions on January 1.

“Yesterday, Gas 4 Cash, an independent business in Spruce Grove, Alta., with a marketing agreement to use the Tempo brand, posted a profane message on an electronic street sign,” the statement read.

“Federated Co-operatives Limited does not condone or support this message. As soon as notification of this message was received, the independent business owner was asked to remove it immediately.”

According to the statement, the owner complied with the request and removed the message from the display, but not before people on both sides of the debate began chiming in via social media.

Owner of that Tempo gas station franchise in Spruce Grove with obnoxious sign has NO respect for his min. wage employees at frontline receiving all manner of feedback for his inappropriate, non-professional sign. And NO respect for young kids, or their guardians #ableg #cdnpoli

I hope this Tempo gas station loses customers for this, but then they will just blame it on Rachel Notley and Justin Trudeau, because Conservative supporters always get it wrong.

this running people out of town or mounting this big social media boycott over a sign at a Tempo gas station. What does that accomplish? Left wing punk bands have been savaging politicians in more derogatory terms since forever. Just turn the cheek. Organized outrage is 💩

The sign at the Spruce Grove TEMPO gas station is juvenile and weak…like those who put it up in the first place…that’s the best you’ve got?! ..political discourse is fine, but not like this…boycott this place Spruce Grove, they are embarrassing you… #sprucegrove #alberta