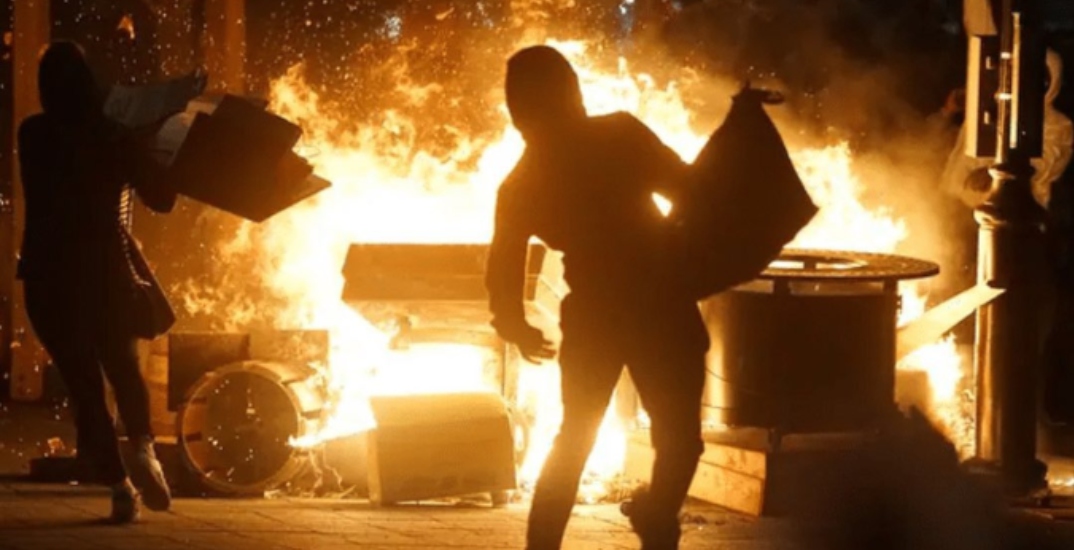 Montreal police arrested seven people and handed out over 100 tickets during Sunday night’s destructive protest in the Old Port.

Hundreds of people took to the streets to protest the reinstatement of Quebec’s nightly 8 pm COVID-19 curfew.

In a phone call with Daily Hive, Raphaël Bergeron, the media relations officer for the SPVM (Service de police de la Ville de Montréal), said 107 tickets were given out, including “several infractions of mischief, arson, breaking and entering, and obstructing police officers.”

Bergeron said fines were also given out to people who were disobeying public health’s COVID-19 guidelines.

On Thursday, Quebec Premier François Legault announced tighter restrictions in Montreal and Laval, specifically the restoration of the nightly curfew, which went into effect on Sunday.

Legault said the new curfew time is to prevent people from having private indoor gatherings, which he said is one of the leading causes of an uptick in provincial coronavirus cases.

The premier said the 8 pm curfew, the only one in place across all of North America, will remain in place “until further notice.”

The nightly curfew was initially put in place for Quebec on January 9 and was set to expire on February 8. The government continually extended it, citing that it was a defining factor in lowering COVID-19 cases across the province.

On March 16, Legault extended the curfew from 8 pm to 9:30 pm, citing the extra daylight as being important for the “physical and mental well-being” of Quebecers during the springtime.

Sunday’s protest resulted in street fires, vandalization, and the destruction of private and public property. While the SPVM would not confirm, Montreal police allegedly used tear gas to keep protesters at bay.

Montreal Mayor Valérie Plante called Sunday’s “mayhem in Old Montreal absolutely unacceptable” in a French tweet. She said the city’s “fatigue against COVID-19 in no way justifies the destruction of public property.”

Montreal police said they will give an updated statement following a “further investigation” of the protest and law-breakers.

A post shared by CANADA’S MOST TALENTED ARTIST (@canada.most.wanted)