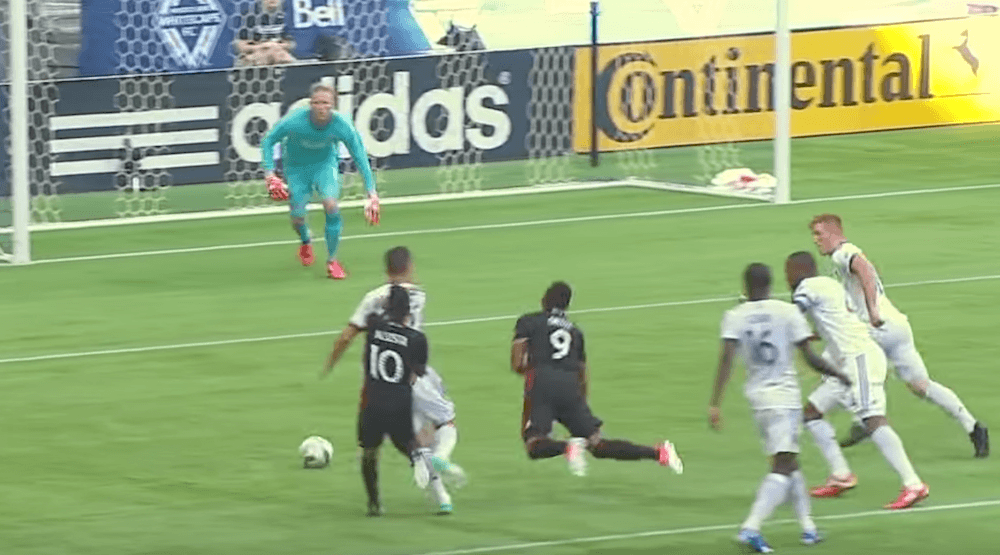 The Vancouver Whitecaps were robbed of a point on Saturday.

The only goal of the match, one that Vancouver dominated start to finish, was scored by Lamar Neagle of DC United on a penalty in the 61st minute.

But it’s how Neagle received the penalty in the first place that had everyone talking after the match.

I would like to say that Jose Ortiz’s dive was a masterful piece of acting, except it wasn’t all that clever. It was obvious to most in attendance that Ortiz had taken a dive and wasn’t touched by Whitecaps defender Kendall Waston.

Referee Sorin Stoica fell for the simulation though, and awarded a match-altering penalty.

“It’s an awful call and it’s had a major impact on the game,” said a bewildered Whitecaps manager Carl Robinson after the match. “Usually I don’t say or criticize anything that officials do because they have a hard enough job, but this official seems to cost us a lot. So it’s unfortunate.”

The Whitecaps could have, and should have, overcome the poor decision by the referee. They outplayed United for most of the match and blew several glorious chances, including a penalty in the final moments that Cristian Techera couldn’t convert. They outshot DC 22-7, had a 9-3 advantage in corners, and held 53.4% of possession.

They hit the woodwork four times.

So the chances were there for the Whitecaps to win the match.

“We should score one of our chances,” Robinson admitted. “I think DC United came with a game plan tonight to try to get a point, and they were gifted three by a wrong call. I could say it’s ok, it’s not ok. Because we’re talking about professional sports now.

Some might say the decision by the referee didn’t cost them the match because Vancouver had so many chances to score.

I’m not one of them.

In a sport where each goal means so much and penalty kicks are converted at such a high rate, the stakes are high when a referee points to the spot.

The Whitecaps should have scored on their opportunities, but they didn’t. Bad luck and exceptional goalkeeping are part of the game. Unfortunately, and far too often in MLS, bad refereeing is also part of the game.

But players dropping to ground like they’ve been shot when they haven’t even been touched, shouldn’t be part of the game and there are ways to curtail it if MLS is willing.

Players will continue to do what Ortiz did, because the reward outweighs the risk.

Increase the punishment, and you’ll find fewer players willing to cheat to win.

Ortiz will probably get a one-match ban for his tumble, like former Whitecaps striker Masato Kudo received last season. For Ortiz and DC United, it will be well worth it.

The dive was the single biggest reason why DC won the match and took home three points. They’ll find someone to take his spot on Wednesday in their next match in Orlando, plus he could probably use the rest anyway.

So ask yourself, does the punishment fit the crime?

Of course it doesn’t.

So why not up the suspension for this kind of action to five matches?

Instead, Ortiz will have no trouble fishing for penalties the next time he steps on the pitch. Maybe he’ll get unlucky and receive a yellow card or get suspended for another match. Or maybe he’ll earn his team another three points.

Unfortunately in MLS, it’s a risk worth taking.