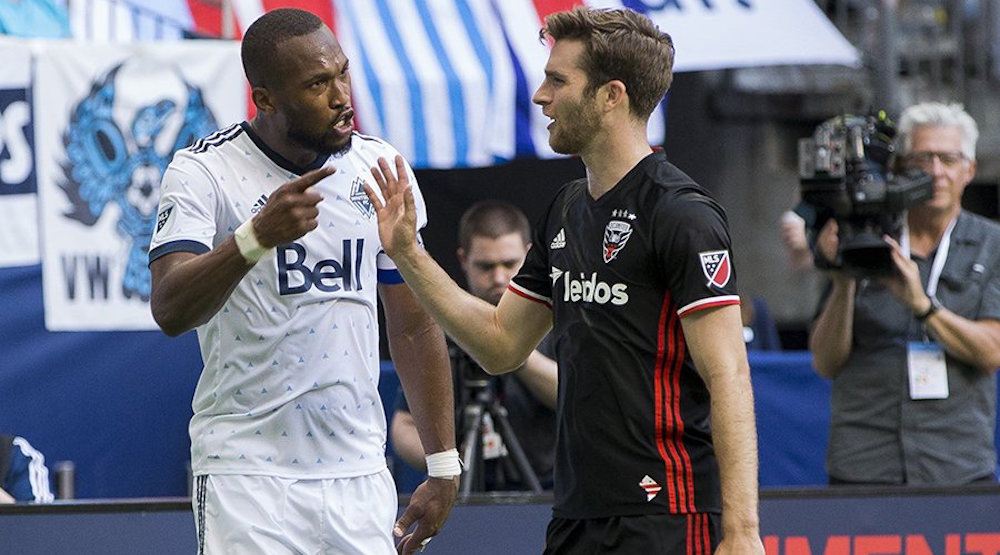 It was just one of those days…

Playing their third home match in the space of eight days, bad luck and a pair of controversial second half penalty calls made the difference for the Vancouver Whitecaps on Saturday.

In the end, it was a disappointing 1-0 loss at BC Place to Eastern Conference bottom dwellers DC United.

The Whitecaps have now dropped below 0.500 with a record of 5W-6L-1D, but still are still sitting in the sixth, and final, playoff spot in the Western Conference.

Before we get into the controversy, let’s talk about the bad luck from the Whitecaps tonight.

You can criticize their lack of finish, but hitting the woodwork four times?

Not one, not two, not three…#VWFC hit the woodwork FOUR times tonight. pic.twitter.com/oTvey8jh0N

The Whitecaps had plenty of chances to take the lead throughout the match, but couldn’t score.

That lack of finish came back to haunt Vancouver, when referee Sorin Stoica awarded DC United a penalty kick.

Defender Kendall Waston was called for the foul, which was helped by the theatrics of United forward José Ortiz.

The referee was well positioned to make the call, but the replays captured by several cameras from around the stadium show that Waston made no contact, and that the penalty was awarded for Ortiz’s shocking and blatant dive.

No surprise then that manager Carl Robinson was not pleased with the decision.

“It’s an awful call and it’s had a major impact on the game,” Robinson said at his post-match media conference. “Usually I don’t say or criticize anything that officials do because they have a hard enough job, but this official seems to cost us a lot. So it’s unfortunate.”

“I think D.C. United came with a game plan tonight to try to get a point, and they
were gifted three by a wrong call.”

Robbo went off on Stoica and MLS officiating after the match. Will tweet exact comments soon as don't want to misquote him! #VWFC

After several tense minutes of confrontations and arguments, referee Stoica pointed the penalty spot giving the Whitecaps one last opportunity to steal a point.

Cristian Techera struck the ball well keeping it away from Hamid, but he couldn’t sneak it inside the post.

Techera’s penalty flub summed up the Whitecaps’ afternoon of missed opportunities and frustration.

“It wasn’t our day,” Robinson added. “Sometimes the soccer gods don’t look out for you, and today was that day.”

‘Bola and the Bug

The Whitecaps had plenty of chances to score in this game.

After an initial cagey opening phase to the game, there were plenty of opportunities for Vancouver including Techera’s header that hit the crossbar in the 20th minute.

In recent weeks the improved play and chemistry between Bolaños, Techera, and the other Vancouver forwards had delivered the results on the pitch.

More of a concern is striker Fredy Montero, who missed a penalty kick last week in the win over Sporting KC, and has not scored in five matches.

The Whitecaps have won four out of their last seven matches, due in large part because of manager Carl Robinson sticking with a consistent starting XI during this time.

Apart from injured players and the suspended Matías Laba, Robinson had a full squad to choose from for the DC United match.

Shea, who made an appearance as a second half substitute, played a key role as Vancouver attempted to come from behind to defeat lowly DC United.

The Whitecaps are in the middle of their busiest time of the season, and have little time to rest before their next match in Montreal on Tuesday night.

Vancouver will then play expansion team Atlanta United at BC Place next Saturday afternoon and then will have a week off before they face FC Dallas on June 17th.